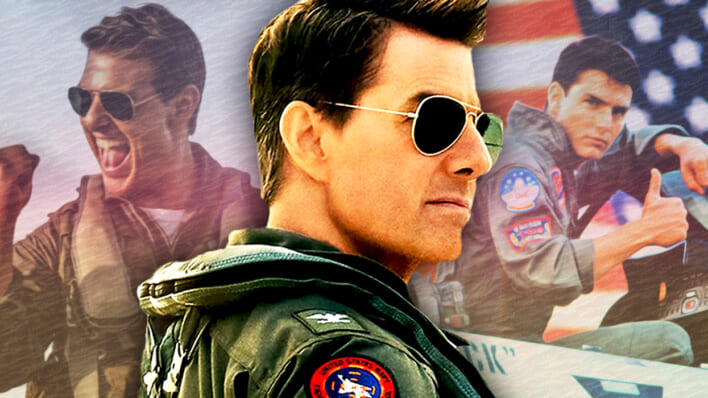 Tom Cruise’s legacy is as invincible as the stunt-laden heroes he portrays, even after weathering controversies around Scientology, high-profile divorces and erratic public behavior. So why does his brand remain so unassailable?
By Maya Khamala    June 12, 2022

Tom Cruise’s legacy is as invincible as the stunt-laden heroes he portrays, even after weathering controversies around Scientology, high-profile divorces and erratic public behavior. So why does his brand remain so unassailable?

Tom Cruise turns 60 on July 3, and while many of his contemporaries have stopped filling cinemas, Tom just keeps on cruisin’. In an industry that prizes youth so heavily, this is impressive to say the least. Indeed, audiences are more than happy to watch him play the same action role he first tackled 30+ years ago.

No matter what you think of him, Cruise is back at the helm with the recent release of Top Gun: Maverick, a sequel to the original Top Gun, 36 years later. And it’s being met with high praise across the board.

RELATED: How Nicole Kidman Changed After Her Divorce From Tom Cruise

Given his recent success, it’s almost possible to forget Cruise’s many years of off-kilter behavior and controversy that posed a threat to his reputation. Of course, the Tom Cruise of recent years is a far cry from the young and dashing lead in Cocktail (1988) or the born-again aspirational rogue in Jerry McGuire.

The Cruise of recent years has been mired in scandal and doubt, from his questionable ties to Scientology to his dubious treatment of his third wife, Katie Holmes — and more — Cruise has seemingly been associated with one PR nightmare after another. And yet, at least as far as his reputation management goes, somebody deserves a raise.

As one source put it: “Tom is feeling on top of the world. It was a gamble to revisit a classic film like Top Gun but it looks like it’s paid off.”

Tom Cruise is one of those people who somehow remains a living legacy in spite of his track record, which, as we may have mentioned, is rocky at best.

First, there’s the whole Scientology affair. Introduced to the controversial religion by his first wife Mimi Rogers 30+ years ago, Cruise’s celeb status made him a valuable asset to the movement, despite even then being compared to a cult.

His second wife, Nicole Kidman, with whom he has two children, Connor and Bella, initially threw herself into the religion, but when she tried to disengage him from it, Scientology chairman Miscavige allegedly hatched a plot to split the couple up.

RELATED: What Happened to Katie Holmes After Her Divorce From Tom Cruise?

Cruise fell for his third wife, Katie Holmes, in 2005, though they divorced in 2012. While they’ve never discussed their split openly, friends claimed Holmes wanted to protect their daughter Suri, now 16, from an upbringing in the church. Cruise remains close to his older kids, who were raised in Scientology, but he has not been pictured with Suri since she was about 7.

“It’s kind of amazing that Tom never gets asked ‘Why isn’t Suri a part of your life any more?’” says leading Scientology expert Tony Ortega. “But there are all these restrictions [when interviewing him].”

Then there’s Cruise’s rather aggressive views on psychiatry, made infamous with his heated 2005 interview with TODAY host Matt Lauer. He got into the debate with Lauer over Brooke Shields’ revelation that she had taken antidepressants to help treat her postpartum depression. Cruise slammed prescription drugs, calling psychiatry a “pseudo-science.”

Earlier the same year, just a month after he met Holmes, Cruise’s erratic behavior on Oprah was the talk of the town. After declaring “I’m in love,” he started jumping up and down on the sofa next to Oprah, who was clearly taken aback. Many saw the episode as an unhinged display, and its memetic nature was immortalized in GIF form forever.

Prior to 2005, Cruise’s well-controlled reputation earned him a joking likeness to “Teflon Tom,” a reference to mob boss John “Teflon Don” Gotti, who himself earned the name for having few criminal charges ever “stick.” But the decade following Cruise’s off-color displays on national TV would not be his best.

Why Tom Cruise Is Still On Top – Despite It All

It seems one of the key things to have changed in Cruise’s public persona is his relationship to Scientology. While he was very closely associated with the church for years, his links to it have become unclear, to the point where some observers wonder whether he has abandoned it altogether.

Then you have his well-chosen and well-timed film appearances. By 2012, after his split with Holmes, Cruise seemingly began his resurrection. It started a couple of years previous with his cameo in Tropic Thunder (2008), which rallied Cruise fans. Then, in 2011, Ghost Protocol signaled a return to the Mission Impossible franchise, two more films of which the actor has lined up afterTop Gun: Maverick.

One thing’s for sure: when Cruise is on, business is good. Over a career spanning 40+ years, his blockbusters (including Top Gun, Jerry Maguire and Born on the Fourth of July) have made over $10 billion at the box office, and he is one of the highest paid actors of all time.

Cruise’s steady resurgence in popularity is also, of course, not hurt by the fact that he is back with British actress Hayley Atwell. A man in love is a relatable man, after all.

Add to this the fact that his appearance has improved too. Fans had not so long ago voiced concerns that Cruise appeared to have had too much botox after appearing with a swollen and puffy face. The Cruise of 2022 hearkens to the Cruise of an earlier time.

Perhaps what really sets Tom apart is that he insists upon continuing to do as many of his own stunts as humanly and legally possible, an altogether unusual approach for an actor to take in the CGI era.

Asked if he will continue to refuse a stunt double as he approaches 60, Cruise asked journalists: “Would you ask Gene Kelly why he does all his own dancing?”

At a time when many fans have grown critical of over-the-top, hardly-human CGI superhero blockbusters, Cruise’s genre of stunt-ridden action is enjoying a resurgence. In his review of Top Gun: Maverick, The Times’ A.O. Scott wrote that it is “not a great movie,” but “an earnest statement of the thesis that movies can and should be great.”

“One could be forgiven for musing that the 1980s are back,” he writes. “Inflationary politics, fast-and-loose financial markets, a Russian military quagmire… add a triumphant Tom Cruise to that list.”

No matter what the true reasons are for Tom Cruise’s seemingly invincible legacy, Box office Pro is predicting that Top Gun: Maverick will be in the summer’s top five blockbusters. Cruise fan or not, you may just want to see the thing for the cultural weight that it carries, if the lead’s problematic nature isn’t enough to drive you away.