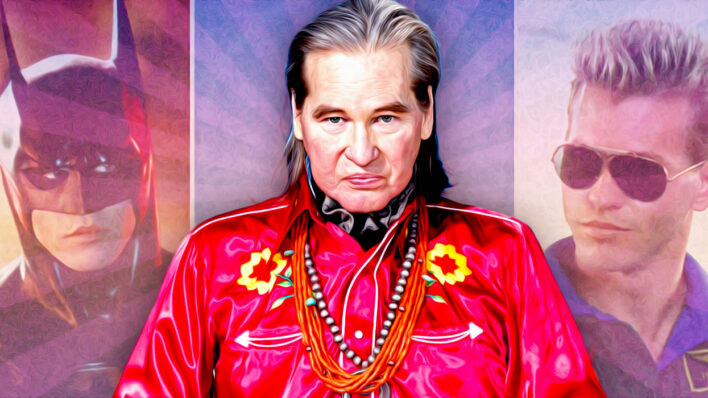 Val Kilmer was a huge star and household name, especially during his heyday in the ’80s and the ’90s. But what are the real reasons behind his disappearance and where is he now?
By Flavia Medrut    May 5, 2022

Val Kilmer was a huge star and household name, especially during his heyday in the ’80s and the ’90s. But what are the real reasons behind his disappearance and where is he now?

With a stellar career spanning over four decades, Val Kilmer developed an appetite for acting in grade school. Since he was almost unusually good at it, a young Kilmer later enrolled in the prestigious Juilliard School in NY. Back then, he was the youngest student to be accepted into the drama division — just one of many accolades he would garner over an incredible career.

Kilmer began his professional career in theater performing off-Broadway alongside Sean Penn and Kevin Bacon. He soon transitioned to film and quickly made a name for himself when he starred in Top Secret.

RELATED: The Dark Reason Matilda’s Mara Wilson Quit Acting – And the Light She Found on the Other Side

His real breakthrough, however, came in 1986, when he played lieutenant Iceman Kazansky in Top Gun, the highest grossing movie of that year, and a cinematic staple in pop culture which has finally gotten a sequel, Top Gun: Maverick.

Val’s career lasted well into the ’80s and ’90s, prominently starring in acclaimed movies such as The Doors, Tombstone and Heat. In 1995, Kilmer made his first and only appearance in a superhero film, the sometimes maligned Joel Schumacher’s Batman Forever. It was around this period that the actor started developing a reputation as an actor — but not a good one.

Why Did Val Kilmer Disappear from Acting?

Maybe it was Kilmer’s reluctance to honor his contract for the Batman sequels or his reputation as a difficult and demanding person to work with on-set. Either way, it was after that point that his Hollywood roles seemed to dry up. Val continued acting, but the roles he took were fewer and not nearly as marquee, successful or critically acclaimed as his earlier films.

Many of Val’s fans, and even his most ardent critics, think he has been unfairly overlooked by the Academy, having never received an Oscar. Perhaps unsurprisingly, Kilmer is of the same opinion. However, being somewhat left out brought the actor what he wanted all along — freedom to take on roles and projects that he actually enjoys.

He managed to break out of the stereotypical heartthrob typecast and looked instead towards his own passions, letting them decide what his next step would be. Because he was no longer forced to act in movies that meant nothing to him, Kilmer was free to pursue his own projects. In 2020, he published his memoir I’m Your Huckleberry, which became an instant bestseller.

With time, many rumors spread about Kilmer’s on-set disputes and reportedly tumultuous love life. But in 2015, people started having a real debate on the actor’s health.

Around this period, he was reportedly taken into hospital and received emergency surgery on his throat. Rumors further swirled that Kilmer was in fact suffering from throat cancer. However, none of them were confirmed by the actor or his representatives.

Val continued to work on a variety of films and projects, but when he appeared in Tomas Alfredson’s psychological thriller The Snowman, fans were shocked by the significant changes in the star’s appearance and the way he sounded. Later, it was confirmed that Kilmer’s voice wasn’t used in the movie at all and it was dubbed by another actor.

After years of guessing and debating over what could be the reason behind the actor’s different appearance and voice, in 2017, Kilmer decided to publicly admit that he was indeed battling throat cancer, and had been for several years.

Over a period of six years, Val Kilmer went through radiation and chemotherapy treatments, as well through a tracheostomy that permanently damaged his voice. It was grueling, but he made a miraculous recovery.

I can’t speak without plugging this hole [in his throat]. You have to make the choice to breathe or to eat. It’s an obstacle that is very present with whoever sees me.

But despite all the horrible things he had to experience, Kilmer still managed to pull inspiration from them. His health struggles had given him a new appreciation for life and its miracles, and taught him to stop taking his career too seriously.

I was too serious. I’d get upset when things like Oscars and recognition failed to come my way.

After revealing the fact that he suffered from throat cancer, Kilmer began giving interviews showing the true nature of his changed voice. He wasn’t hiding it anymore.

Although he now has a completely different sound, the Hollywood legend has proven that he didn’t lose any of his charm and wit. In fact, when he was asked by the Hollywood Reporter what he missed most about his voice, his answer was “That I had one! That I didn’t laugh like a pirate.”

But the truth is, it’s a miracle that he managed to retain any voice at all, and he owes this to a skill that he picked up while studying at Juilliard. While back then he resented the long hours he had to spend in voice training, now, Val has nothing but gratitude for those lessons. Without them, his voice wouldn’t have just drastically changed — it would’ve been entirely lost.

Val Kilmer: Back In the Spotlight

The fact that he went through a terrible disease that left him with some serious damage did not stop Kilmer from continuing his work and remain one of Hollywood’s hottest actors. In fact, one of his most famous and beloved roles is about to be brought back to life soon.

In 2018, Val confirmed he would be returning as lieutenant Iceman, alongside co-star Tom Cruise. The highly-anticipated Top Gun: Maverick will be released this year, on May 27.

But despite all that, I still feel I’m the exact same person. Still the same creative soul. A soul that dreams ideas and stories confidently, but now I can express myself again, bring these ideas to you, and show you this part of myself once more. A part that was never truly gone. Just hiding away.

Whatever life has in store for Val Kilmer, one thing’s for sure — he is ready for anything and he’ll keep on fighting no matter what. His energy, commitment and perseverance is a true inspiration for us all.