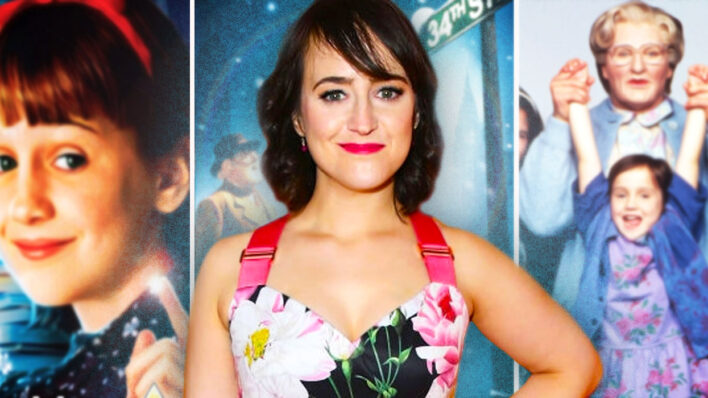 Refusing to subject herself to the Hollywood gold standard, Mara Wilson quit Hollywood at just 13 to pursue life on her own terms.
By Maya Khamala    April 28, 2022

Refusing to subject herself to the Hollywood gold standard, Mara Wilson quit Hollywood at just 13 to pursue life on her own terms.

Mara Wilson swiftly and spectacularly rose to fame as a child actor in the 1990s, and is well known for playing Natalie Hillard opposite Robin Williams in Mrs. Doubtfire. Following this roaring success, she was cast in Miracle on 34th Street, a remake of the 1947 holiday classic, which became another smash hit.

Although Wilson could have had her pick of roles at this point, she was choosy from a young age and didn’t appear in a major film again until she landed the title character in Danny DeVito’s Matilda a couple of years later. For her work in the film, she was nominated for a whole host of awards, winning the YoungStar Award for Best Performance by a Young Actress in a Comedy Film.

She was just 9 at the time.

In the years following Matilda, Wilson starred in several other films. Perhaps most notable was her role as Lily Stone in Thomas and the Magic Railroad (2000). But once filming was complete, she suddenly disappeared from the scene, and would not surface again for another 12 years.

While she has stated that the purpose of her hiatus was to focus on writing, which she has, it turns out there’s a bit more to it than that.

Why Did Mara Wilson Leave Hollywood and Quit Acting?

Although Wilson was one of the biggest film stars in the world before she was 10, her teen years were not so great. By the time she appeared in her last movie role, Wilson already felt disenchanted with the film industry.

“I was very depressed, I was very anxious, I can barely even remember Matilda coming out. I only have vague memories of the premiere, and it was really hard for me. So I think that I definitely became kind of disenchanted with acting, with Hollywood.”

Going through puberty on film sets was also incredibly awkward for Wilson.

Wilson has opened up about this period, sharing, “I would look at Keira [Knightley] — who is two years older than me — in magazines and think, ‘There’s no way I’m going to be as hot as her in two years. Things will have barely changed.’ I felt — and sometimes I still feel this way — I felt upset when I would meet people, because they seemed disappointed that I wasn’t cute.”

Wilson stepped away from Hollywood in part to focus on writing. In her 2016 autobiography, Where Am I Now: True Stories of Girlhood and Accidental Fame, she finally set the record straight about her childhood of fame and her rather sudden disappearance from the public eye.

“You don’t know what happens between those IMDB entries,” she writes. “I knew there were people who felt sorry for me and people who were making up stories about me. I think I wanted to reclaim that narrative.” She goes on to describe how her birthday wish at 13 was “a day off” and the increasingly stressful realization that she wasn’t “pretty enough” to keep doing what she loved.

She goes on to share the ultimate cautionary tale of what so often happens to child stars: facing the potential end of her career before she had even finished school.

As such, she says she felt she had three basic options:

“Get cosmetic surgery and go out on auditions for the cute and funny best friend characters, stay the way I was and go out for the meagre character actor roles for young women, or accept myself and give up the idea of a Hollywood film acting career. When you see that somebody’s last credit is Thomas and the Magic Railroad when they’re an awkward 12-year-old, you’re, like, ‘Oh, how sad.’”

After Matilda, a few less-than-stellar roles followed, but more and more, Wilson lost roles to other young stars on the rise, such as Lindsay Lohan for The Parent Trap. In 2000, after filming Thomas and the Magic Railroad, she decided to retire from acting — and she meant it.

“There wasn’t like one big moment where I knew I was done,” she said, “The rejection hurt because it had been just such a prominent part of my life for so long.”

Wilson’s decision to leave Hollywood was instrumental in choosing a whole new life for herself —one far more empowering than the pageantry of Hollywood ever offered her.

As difficult and painful a choice as it was, her decision to quit Hollywood when she was just 13 speaks volumes about her maturity and integrity of character, ultimately setting her apart from many other child stars of the same age.

To their great credit, Wilson’s parents did everything they could to keep her grounded. Bonnie Liedtke, who was Wilson’s agent for 10 years, has talked about how Mara’s mother fought for a “normal” childhood for her daughter, in an effort to keep things as humble as possible, and, she says, “Mara was able to hold on to that.”

Sadly, Wilson’s mother, who was also her manager, died of cancer when she was just 8-years-old. Of course, this tragedy only enhanced the depth of her emotional experience at a young age, ultimately equipping her to plot a new course just a few years later.

“Writing I’d always loved,” she shared in a 2016 interview. “Even on the sets of various movies, I would always be in my trailer writing stories — usually very similar to whatever Judy Blume or Beverly Cleary or Bruce Coville book I was reading at the time — but I loved to write. I started writing dialogue, and I started doing performance pieces — like 10-minute solo performance pieces — and eventually, I did a one-woman show, and that felt so much more real than being on a set every day.”

Where Is Mara Wilson Now?

Ever since Wilson returned to acting in 2012, the majority of her work has been focused on web series, in which she often appears as herself. She has also taken on occasional stage roles, as well as a couple of brief returns to the screen, including a 2016 cameo in Broad City and voiceover work on animated shows BoJack Horseman and Big Hero 6.

Most of all, the Wilson of today is a full-time writer. She writes her own blog, in addition to pieces for the likes of Elle, The New York Times, McSweeney’s, Reductress, Cracked and Toast, among others.

Wilson is also an activist, having been unapologetically vocal on a variety of important issues: she campaigns for mental health and educates about LGBTQI issues, having come out herself as bisexual several years ago.

Additionally, she is a rather fearless advocate against the sexualization of young girls in Hollywood. Her famous essay on the latter topic details her own experiences of being sexualized, while also speaking out about Hollywood’s sexualization of Millie Bobby Brown, among others.