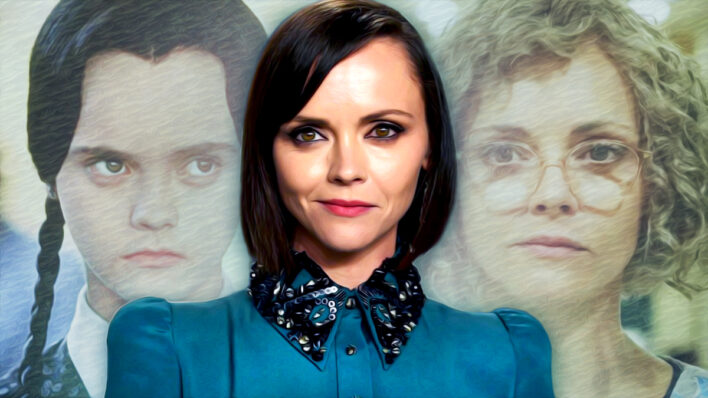 Many of Christina Ricci’s fans thought she disappeared from Hollywood, but with continued activism and new projects like the Addams Family’s ‘Wednesday’ on the way, Ricci is back. But did she ever really disappear?
By Maya Khamala    March 23, 2022

Many of Christina Ricci’s fans thought she disappeared from Hollywood, but with continued activism and new projects like the Addams Family’s ‘Wednesday’ on the way, Ricci is back. But did she ever really disappear?

Known for playing unusual characters with a dark edge, Christina Ricci, now 42, is best remembered by most fans for her child role in Mermaids and her subsequent emergence as a ’90s ‘teen icon’ with roles in The Addams Family, Casper, and Now and Then.

Although she’s been in a number of films since, including the 2003 biographical crime drama Monster, in which some say her performance was sorely underrated, most people still have to stop and think about the last time they heard anything much about Christina Ricci.

That’s all going to change again, of course, thanks to the recent announcement that Ricci will return to the Addams Family universe in Tim Burton’s Netflix spinoff series, Wednesday, albeit not in the title role. And while this project and a few other recent cameos have put her back at the forefront of many of her fans’ minds, this paragon of Hollywood’s Goth alternative spent the bulk of the last few years fading into the background when it came to her acting career. But that’s not to say she hasn’t been busy creating new fans for a very different reason.

What Exactly Happened to Christina Ricci?

Always a nonconformist, Ricci has tended to gravitate toward smaller, edgier independent films. She has often portrayed young, alienated, sexually curious and/or manipulative women in films like The Ice Storm and Black Snake Moan. But although she’s often had rave reviews, she hasn’t enjoyed the same sort of mainstream success she knew as a kid, leading many people to believe she disappeared altogether.

Given Ricci’s “pushing the envelope” era of her late teens and early twenties, where she really tried to establish herself as a “grownup” actress with The Opposite of Sex, 200 Cigarettes, Buffalo 66, and Pecker, some fans believe it may have all been a bit too much at once for mainstream Hollywood to feel comfortable keeping her in mind. And that’s saying nothing about casting her in big productions. In other words, it’s possible Ricci was typecast as the “teen queen of crass.”

It’s worth noting, however, that Ricci has been attracted to edgy, gritty, bold and nonconformist projects for many solid reasons, most of them deeply personal.

For instance, Ricci has publicly opened up about how she “had a very hard time with fame as a child,” reasoning that, “no child should be held up for adults to criticize, question, interview, weigh in on.” As the result of finding it difficult to “navigate being an adult celebrity versus being a child celebrity,” a young Ricci took to “goofing around” by making shocking statements during interviews, such as “I’m not afraid to die,” and “It’s such a natural thing to have sex with [your parents].”

Ricci has since confirmed that these statements were “ironic” and nothing more than a “teenager spouting obnoxious things.” Off-screen, Ricci struggled with her fame as a teen battling with anorexia and self-harm but has since overcome these demons.

In a recent interview with The New Yorker, Ricci was asked about her motivations in taking on provocative roles like the ones she played in The Opposite of Sex, and The Ice Storm, particularly in a context where she struggled with self-image so much as a teen.

She replied, “The sexual aspects of all those roles were not something I liked. For me, those kinds of things are just necessary evils. But I always wanted to play more complicated characters. And I guess when it’s a teenage girl, the issue of sexuality is going to be part of it. But I hated the whole “sexy” thing, and people talking about my boobs. It was just gross to me. Totally gross.”

Ricci’s portrayal of nymphomaniac Rae in the 2006 drama Black Snake Moan was particularly well received. However, the film was deemed controversial because of its dark and exploitative themes. Still, critics felt Ricci was impressive, with one writer describing her performance as “fearless, specific, and blazingly committed,” adding, “She’s the white-hot focal point of [director] Brewer’s loud, brash, encompassing vision.”

Despite her success, Ricci was so disturbed by the marketing campaign for Black Snake Moan that she became an activist for rape victims. Rae, the character she portrayed, was a sexually abused girl desperate for male attention. But when she saw herself on film posters posing seductively in a navel-bearing top and short shorts, Ricci was inspired to join RAINN (the Rape, Abuse and Incest National Network), an organization founded by songstress Tori Amos.

“I wasn’t really comfortable with the way [Black Snake Moan] was being marketed and I was trying to combat how exploitive that campaign was, given what I thought the movie was about when I was making it. So I became directly involved with RAINN [on the issue of] rape trauma syndrome, and … They asked me to be their national spokesperson, which was amazing. Then they invited me to go to Washington to lobby the Congressional Appropriations Committee for funding for legislation. That was crazy. I didn’t know just anyone could go and meet with congress-people. I kept saying, ‘You guys know I didn’t go to college, right? I’m just an actress.’”

Ricci became RAINN”s national spokesperson in 2007 and continues to fulfill the important role of advocating for survivors of sexual assault to this day.

On a personal level, Ricci is no stranger to abuse, having suffered domestic abuse at the hands of her ex-husband, James Heerdegen. In her divorce filing, she stated that she was subjected to “severe physical and emotional abuse” and that, “many of these acts of abuse” took place in front of her son.

Christina Ricci: Onward, Upward and Beyond

Today, along with her aforementioned Addams Family project, Wednesday, Ricci stars in the critically acclaimed drama seriesYellowjackets, in which she plays a role she’s seemingly been working up to forever. Her character, Misty Quigley, is a nurse with a pet parrot named Caligula and an obsession with lacing household items with narcotics.

Ricci, today a proud mother of two, has also begun producing her own projects, and is interested in directing as well. Her outspoken, envelope-pushing journey thus far has undoubtedly played a part in the thoughtfulness she puts into the types of roles she takes on these days as a full-blown adult.

“Just recently have I actually started thinking, ‘What do I really want to contribute? Who am I? What means something to me?,’” she asks. “I deserve to do work that I feel good about. I want to contribute to the world, I don’t want to just take from it. I want to do things that I’m proud of instead of being exploited, as I feel I was when I was a child. I am now more in charge of myself and doing things because I understand more fully what life is supposed to be about.”