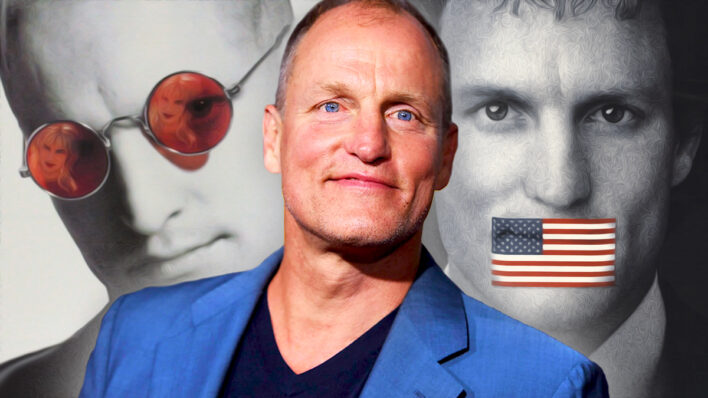 Woody Harrelson sees himself as a lucky guy, and he is. However, luck couldn’t have been the only ingredient in overcoming an unfortunate financial situation, stepping out from the shadow of a hitman father, and becoming one of Hollywood’s most talented actors.
By Flavia Medrut    March 11, 2022

Woody Harrelson sees himself as a lucky guy, and he is. However, luck couldn’t have been the only ingredient in overcoming an unfortunate financial situation, stepping out from the shadow of a hitman father, and becoming one of Hollywood’s most talented actors.

Woody Harrelson’s life and career are anything but typical. He’s been on the screen for over 30 years and every time we see him in a new role, he always seems to be ascending. The actor, who is now 60, is more in demand than ever, and more ready to show us that he may just be getting started.

Although he worried about being typecast, Woody has proven to be a versatile actor.  Now You See Me, Hunger Games, Zombieland, True Detective and Venom are just a few of Harrelson’s successful movies from the past decade. So while the man considers himself lucky to have landed such great roles, let’s be honest: it takes talent and hard work to perfectly impersonate the funny guy and then the somber detective, or the suburban teacher and then the maniacal villain.

Let’s explore the roots of that talent as we dive in and discover the man behind these incredible accomplishments, how he managed to overcome life obstacles to reach the top and what we can learn from him.

Woody Harrelson’s Hard Early Life – And How He Overcame It

Woodrow Tracy Harrelson was born on July 23, 1961 in Midland, Texas. His mother was a secretary and his father… was a hitman. Yes, you read that correctly, but more about that later.

His father was rarely around when he was a young boy so the family mostly relied on his mother’s wages. Due to financial difficulties, Harrelson needed to learn how to be resourceful with money. So, for his first job, he bought newspapers in bulk and sold them around the neighborhood. He didn’t actually turn a profit doing this, but it was a start, especially since he was very young.

Despite all my hard work delivering papers, with my ineffective collection efforts I’d usually have a net loss. I’d hoped to make a little spending money, but I didn’t make money—I lost it. Sometimes in life, the middleman gets squeezed. On the other hand, that paper route sure got me a lot of exercise. I always try to find the silver lining.

By the time he was 23, he wasn’t sure that he wants to do television. He mostly didn’t like the quality. However, until Woody got his big break, he lived the typical starving artist’s life. He lived in New York City and took just about any job he could get. Before becoming a superstar, Harrelson waited tables, posted gym flyers around local shops and cafes, and did all kinds of weird side gigs.

Life’s not easy when you’re adding up your cart’s total before getting to the register, but things were about to change.

How Woody Harrelson Got His Big Breakout Role on Cheers

Not caring too much about whether he’d get it or not, Woody went to audition for Cheers — and aced it! He had no idea that this would be his first signature role and his first step on the journey to success.

Another hit that got him Hollywood’s attention was White Men Can’t Jump, which further solidified his name as being in the Hollywood A-list at the time, and going forward.

Not only did he get more leading roles, but also more interesting ones. Why? Because Woody Harrelson is an intellectual chameleon. He can play the dumbest guy in the room, or the smartest. He can also play the smartest guy that pretends to be the dumbest. His acting skills won him some great awards and three Oscar nominations.

But did Harrelson’s controversial father have any effect on his son’s life and future career? Was he an inspiration for some of Woody’s greatest performances? In a way, yes, but not the way you might think.

Woody Harrelson’s Father: In the Shadow of a Hitman

Woody describes his father, Charles, as a “quite charming fellow” and a “great story teller.” Charles Harrelson had an incredible intellect, but unfortunately, he chose the wrong path.

He was a gambler, and a good one. But that’s not what lead to his incarceration. Woody’s father was a hitman and it is rumored that he was asked to kill at least 20 people. He even had business cards that said “Have gun, will travel” and “Hitman”.

Thanks to his superstar attorney, Percy Foreman, Charles was able to escape with a lighter sentence. He went to jail from ’68 to ’79 and then he got out for a year. But a killer remains a killer.

Charles soon got a new job, and was contracted to kill a federal judge, which he did. John H. Wood Jr. was the first federal judge that was assassinated in the Unites States, and it absolutely shook the nation. Charles Harrelson got two life sentences and died in prison at the age of 68.

Up until his death, Woody regularly visited his father and even spent millions trying to get him out of jail.

Just being a son trying to help his dad…

While never as violent as his father, Woody was quite the wild-child. He never shied away from trouble and has been busted more than a few times. His troubles really began as an adult when he was 21 years-old and was arrested the first time.

I was a pretty happy guy, but I also had a lot of rage. When I was a kid, I had real emotional problems. I would have these tantrums. [Later] And I used to fight a lot. I used to go to bars and fight the guys I thought were bullies. I’ve got scars everywhere. But it’s like my buddy says: ‘If you’re not living on the edge, you’re taking up too much room.’ And I guess I do live on the edge.

In 2002, Harrelson got the media’s attention after he was caught with three other women in a hotel room in London, under the influence of drugs. During his stay in London, he managed to stir up even more trouble by getting into a fight with a cab driver. He eventually ended up doing a bit of jail time and now describes the night as one of the worst of his life.

Considering a possible link between Woody’s acting skills and his father being a convicted murderer, in 1994, the actor played a shockingly convincing role in Oliver Stone’s Natural Born Killers. Harrelson had to dive deep into both his and his father’s demons to impersonate a serial killer. It’s debatable whether Charles Harrelson had anything to do with his son’s amazing performance, but one thing’s for sure — the movie reportedly inspired several real-life murders.

A person who is uncomfortable or unhappy can often find it hard to change, which is a problem Harrelson readily admits to having struggled with in the past. He also admits that his wife, Laura, had a lot to do with finally having the will to change. She’s been that special person who has anchored him down all this time.

I guess there has been a change in me. If I’m honest, I have to say that something has shifted, some kind of basic core disturbance. It’s like some post that you’re trying to get out of the ground, and it’s just so wedged there, you have to push it every which direction, and you can finally lift it out.

It took him a lot of time to reflect upon his behavior and lifestyle, in order to become the person he is today. But throughout the years, Woody Harrelson proved that the wild-child looking for trouble can change into a responsible man with a generous heart. Sometimes good people do bad things, but now he’s more reliable than ever, his career is still ascending and he’s also a passionate advocate for many different causes.

Better Late Than Never – Even in Hollywood

Of course, our parents’ behavior, whether it’s towards us or others, can have a direct impact on our future beliefs and/or development. Every child goes by the example of the ones closest to them, it’s only natural.

However, as we grow up, we learn to distinguish between the good and the bad, and that’s when we can make a life-changing decision for ourselves. We can continue to let our parents’ example influence us and be the person most people would expect us to be. Or we can go in the opposite direction and become the person who we want to be — better or different from our former role models.