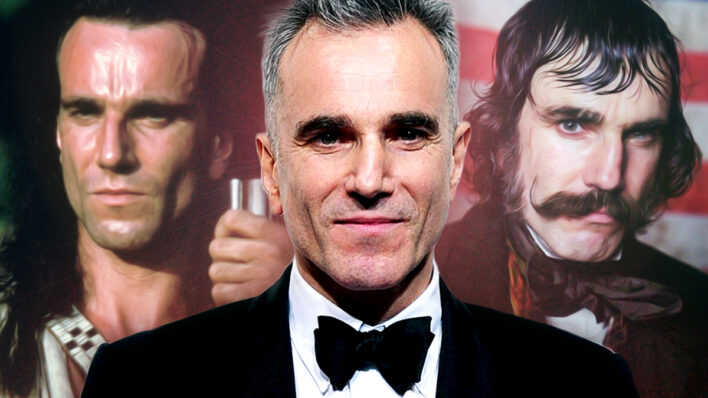 After more than three decades of game-changing work in the movie industry, the three-time Oscar winner Daniel Day-Lewis decided to retire. But why did he leave such an iconic career behind, and what is he up to now?
By Flavia Medrut    March 29, 2022

After more than three decades of game-changing work in the movie industry, the three-time Oscar winner Daniel Day-Lewis decided to retire. But why did he leave such an iconic career behind, and what is he up to now?

If you’re not familiar with the works of Daniel Day-Lewis, you’re missing out. The celebrated actor is one of the most talented performers of our time and often considered one of the best in all of cinematic history. He is the only actor to win the Oscar for Best Actor three times, which puts him in front of legends such as Marlon Brando, Jack Nicholson and Anthony Hopkins.

Not only that, in 2014, at age 57, the actor received another accolade when he was knighted for his services to drama by Prince William, becoming Sir Daniel Day-Lewis. Due to these incredible accomplishments in the field and outside of it, his decision to quit acting in 2017 was both a shock and a loss for his fans. That said, it also didn’t come as a surprise.

But what made Daniel Day-Lewis such a standout in a sea of truly incredible talents? What made him special and different… and where did he go?

It’s no secret that Daniel Day-Lewis has a very unique way of approaching his craft. In fact, sometimes the man is so chameleonic, it’s hard to tell whether he’s the one playing a role or not.

Lewis is very picky about the roles he accepts, and he is also known for disappearing into the characters in the process. For example, for his Oscar-winning performance in My Left Foot, he stayed in a wheelchair and asked to be spoon-fed by the staff, in order to fully experience having cerebral palsy. For his role in The Last of the Mohicans, he spent six months in the wild, and for The Ballad of Jack and Rose, the actor isolated himself from the cast and crew.

Moreover, for The Boxer, Lewis spent 18 months training to become a professional fighter and tattooed both his hands. Unlike some others who have employed similar methods, the results Day-Lewis enjoyed were spectacular. Then again, being a method actor and such a perfectionist eventually took a toll on him.

Aware that his approach may seem bizarre to others, Day-Lewis admitted that he just couldn’t operate in any other way. He either had to put everything into his craft or nothing at all.

Why Daniel Day-Lewis Got Sad after Finishing Every Movie

Daniel Day-Lewis has stated more than once that the work itself can feel lonely and sometimes grueling. After dedicating himself so much to a role, he often had to deal with post-production depression. Letting go of a character that he was portraying for a long time had its emotional repercussions.

For example, he spoke with his Butcher dialect for months after Gangs of New York’s completion, and also experienced a sense of alienation during the movie’s debut.

There’s a terrible sadness. The last day of shooting is surreal. Your mind, your body, your spirit are not prepared to accept that this experience is coming to an end. You’ve devoted so much of your time to unleashing, in an unconscious way, some sort of spiritual turmoil.

Daniel Day-Lewis for The Telegraph

Daniel Day-Lewis Was Never Comfortable with Being Famous

Unlike most of his peers, Lewis has often rejected the notion that he’s a public figure at all times. He simply doesn’t and never did feel comfortable being famous, so even at the peak of his career, he would retreat from the public eye. The actor loves spending time with his family in Ireland and he was often spotted having a pint at a local pub — alone.

To people from the outside, I seem to disappear. Of course in my experience I don’t disappear, I’m just doing other things. What I’m doing is re-engaging with life. And it’s that period of time that allows me to do the work. So these two things are indivisible.

The Phantom Thread, released in 2017, affected Day-Lewis so much that he said he didn’t even want to watch it. He totally inhabited the character — in mind, body and spirit.

RELATED: What Happened To Chuck Norris? The Action Hero Who Disappeared

For this movie, the actor studied fashion, learned how to cut, drape and sew — basically, everything a fashion designer should know (he even re-created a Balenciaga dress on his own). Little did we know that this would be his last movie project.

I did want to draw a line. I didn’t want to get sucked back into another project. All my life, I’ve mouthed off about how I should stop acting, and I don’t know why it was different this time…

Day-Lewis has thought about retiring many times before. The long gaps between his movies are no coincidence. But every now and then a new challenge came along and Daniel felt an urge to prove himself that he can still top his previous performance.

The truth is that the movie industry has changed a lot, leaving less room for characters that Lewis tends to favor. Studios no longer focus on building new and exciting projects, but rather look for intellectual properties with proven brand values. So being in a sequel or a reboot doesn’t seem too appealing for the actor.

After the release of Phantom Thread, Day-Lewis’ spokesperson made it clear that this time he would be retiring for good. She went on to say, “This is a private decision and neither he nor his representatives will make any further comment on this subject.”

Having a sense of grief over his decision to step away from the movie industry, Daniel admitted he wasn’t sure about what he was going to do in the future, but he promised not to stay idle.

What Does Daniel Day-Lewis Do Now after Retiring from Acting?

Day-Lewis said that he wanted to explore the world in a different way. Apparently, Daniel is passionate about shoemaking and woodworking. These deep interests led him to Italy, where he became an apprentice shoemaker under Stefano Bemer, showing us again that he’s serious about everything he feels passionate about, which itself is a tremendous lesson for everyone who feels locked into a career.

Most particularly, perhaps, because you see this visible evidence, you have this tangible thing at the end, and if you f*** up, you can see it very clearly and do it again. It’s not a matter of opinion. It’s either good or it’s bad.

If you are driven enough, you can always turn around and follow your dreams, even if they are wildly different from the thing you found success in doing. Reinvention, after all, is its own benchmark of success, let alone being human.

In Daniel Day-Lewis’s case, it may seem a strange side career, but shoemaking helped him stay focused and centered. He may have been showered with decades of praise for his work on the movie set, but he decided to retire and look for a different level of fulfillment. That should prove to even the most dedicated professional that no matter how much you achieve in one career, life remains short and you should always try to find new ways to feed your soul.