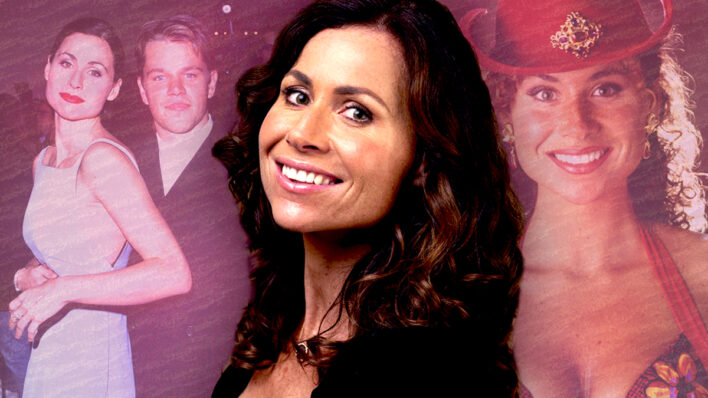 Why Did Minnie Driver Disappear from Acting – And Where Is She Now?

With a career that started in Ben Affleck projects and James Bond movies, Minnie Driver has since backed away from the harshest of Hollywood limelights. But that doesn’t mean she hasn’t been active. In fact, in her mind, she’s more successful than ever.
By Maya Khamala    April 6, 2022

With a career that started in Ben Affleck projects and James Bond movies, Minnie Driver has since backed away from the harshest of Hollywood limelights. But that doesn’t mean she hasn’t been active. In fact, in her mind, she’s more successful than ever.

Minnie Driver was a household name in the 1990s, but although the British-American actress has taken on roles in both film and television pretty consistently ever since, all but her most ardent fans may not have heard much about what she’s been up to for the past few years.

Driver rose to prominence in the mid ’90s with her break-out role in Circle of Friends, also starring Chris O’Donnell and Colin Firth, before going on to star in a range of films including the cult classic Grosse Pointe Blank, alongside John Cusack. A bit more recently (circa 2008), she portrayed a drug-addicted traveller and ex-con in the series The Riches.

But most know Minnie best for her role in the forever classic Good Will Hunting, for which she received an Academy Award nomination. At the time of the film’s making, she was still hot from 007 fame, having just appeared opposite Pierce Brosnan in GoldenEye, while her co-stars Matt Damon and Ben Affleck were still newbies.

So the question remains: where exactly did Minnie go after a period of such prominence? Why did such a rising star seemingly fade into the background, opting for a catalogue of not-so-major roles over a period of decades?

“It’s not a meritocracy and it’s not a level playing field,” Minnie once said of Hollywood, with which she shares an ongoing love-hate relationship.

Driver first realized she might not be compatible with the film industry very early in her career when she was asked to stand in a ditch so that she appeared shorter than her male love interest in a film she opted not to name.

Driver also recently shared that the producers of Good Will Hunting initially hadn’t wanted her for the part of Skylar, the Harvard student who falls for Matt Damon’s janitor character, because they didn’t think she was “hot” enough.

“They were probably right. I had other qualities,” she says.

But in spite of her inimitable way of flouting Hollywood standards, she is not immune to the frustration of actually losing out on parts because she has the “wrong” qualities.

“I’ll always be frustrated by it… I used to get much more mired in the unfairness of things, and now I just haven’t got any time to waste. If that’s not going to work out, good to know, moving on. Don’t waste time,” she said during an interview with The Independent. “It’s easier as you get older.”

When asked about how one can “keep it up,” after starting one’s career with such a huge, groundbreaking film and an Oscar nomination, Driver had clearly already given the question a lot of thought.

“You can’t… The idea of maintaining, of being a movie star, for decades. I clearly did not have that. I did not have the appetite. Ambition requires you to create really big things that you’re supposed to want, and then they become totems to a person that you actually may not be. But you’re encouraged to worship at those totems because that’s what keeps the engine of Hollywood going.”

She maintains, “The 50 films and television shows on my IMDb are literally the 50 yeses, out of thousands of nos,” which is something she remains very proud of in her career.

Minnie’s Activism: and Never Being Nervous to Speak Her Mind

Driver’s relationship to Hollywood is similar to her relationship to life in general: she is never nervous to speak her mind, regardless of how challenging or compromised her own experiences have been.

For instance, in 2017 when Matt Damon criticized the #MeToo movement’s “culture of outrage and injury” just a year after Driver herself had revealed she was sexually assaulted at the age of 17, she tweeted “God god, seriously?” before suggesting that men like Damon were “systemically part of the problem.”

Driver was also an ambassador for and supporter of global anti-poverty organization Oxfam for 20+ years, but nonetheless chose to step down in 2018 when the organization was accused of covering up claims that staff had sexually exploited victims of the 2010 earthquake in Haiti. A report published by Oxfam after the investigation failed to make any mention of sexual exploitation.

“I needed to send a very clear message,” Driver told The Guardian, “to the corporate people who knew this was going on, who hush-hushed it, who were not transparent and who didn’t do anything about it. They need to clean house.”

“It might be someone else’s idea of failure that I didn’t stay being a huge movie star,” says Minnie. “For me, I’m 51 [52 now], and I’m making a living and I own a home that I love, and I have this partner and this child, and people will still hire me to do something that I love. I can’t possibly call that anything other than the most resounding success.”

To say that her personal life is important to her is a gross understatement. Although her brief and awkward relationship with co-star Matt Damon has garnered attention in the past, today Driver has a happy family life she wouldn’t trade for the world. Although she never married, she has been in a relationship with filmmaker Addison O’Dea since 2019 and has a son named Henry, 13, from a previous relationship. Driver points out that O’Dea is wrongly described in some papers as her fiancé, “because I wore a ring on the wrong finger.”

As low-key as she’s playing it these days, she and her son Henry nonetheless had an encounter last year with a paparazzo who blocked their path as they were exiting a supermarket. Driver was shocked when her son stopped to ask him, “Is there really nothing you’d rather be doing with your day?”

“And he wasn’t even being angry or sarcastic,” she adds. “He was genuinely bemused that this was someone’s job. He finds fame ridiculous and thinks it’s a huge bummer for everyone involved.”

It seems that Driver’s son has inherited her wide open critical faculties.

RELATED: What Happened to Neve Campbell? The Scream Star Who Stepped Away From The Scene

These days, Minnie keeps herself busy running her own production company, which she calls Huge Fan, because it’s a funny and phony phrase that Hollywood types always say to her.

She’s also been working on a podcast called Minnie Questions, in which she interviews a range of artists, actors, directors, and musicians: in essence, creatives. She sits down with experts across disciplines and asks them the same seven “mini questions” as a way of demonstrating that even the smallest of questions can uncover gigantic truths about life, love, belonging, and the universe.

And who is anyone to question the worthiness of such an endeavor?