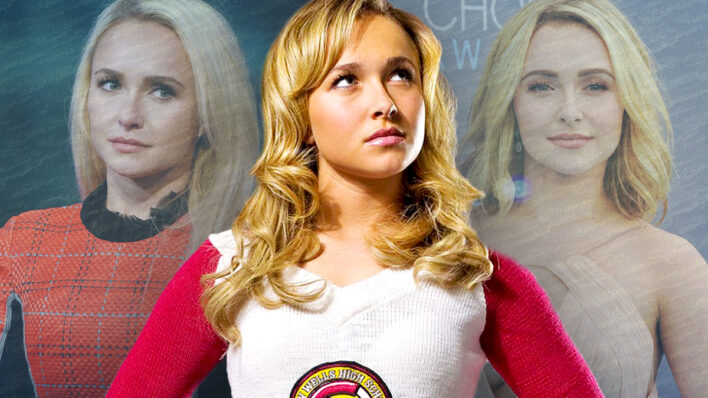 What Happened To Hayden Panettiere, the ‘Heroes’ Cheerleader Who Disappeared?

The former child actor and Heroes star has dropped off the radar in recent years, and the battle she’s been fighting may be more challenging than the most pitched superhero conflict.
By Shaoni Das    April 1, 2022

The former child actor and Heroes star has dropped off the radar in recent years, and the battle she’s been fighting may be more challenging than the most pitched superhero conflict.

It’s next to impossible to chart an actor’s trajectory through fame. One minute they’re on cloud nine, primed to seize the world, and the next, they’re nowhere to be seen; irrelevant, disregarded, a faint memory.

Such is the narrative that looms over Hayden Panettiere’s career. She was a dazzling child star, who charmed everyone with her quick wit and irresistible innocence. Her breakout role as Claire Bennet on Heroes cemented her as one of the brightest up-and-coming dramatic performers of her generation.

For a while, she delivered on the promise, starring in a number of popular, intriguing fictional works through the late 2000s and early 2010s, such as I Love You, Beth Cooper, Scream 4, and country music television drama Nashville.

However, in recent years, especially since her six-year run on Nashville ended, she has all but disappeared. And, when she does surface in the press, it’s usually for her tumultuous personal life, which continues to be subject to widespread scrutiny, curiosity and sympathy.

In a disheartening case of life imitating art, Hayden Panettiere fell into postpartum depression following the birth of her daughter Kaya in 2014, mirroring her character’s exact storyline from Nashville. As a result, the actor entered a facility in October 2015, taking an extended leave of absence from work.

Before checking in to rehab, she spoke about her struggles on Live! With Kelly and Michael, and urged society to re-examine their perception of PPD and what it entails. “There’s a lot of misunderstanding, and there’s a lot of people out there that think that it’s not real, that it’s not true, that it’s something that’s made up in their minds, you know, it’s hormones,” she said. She also noted that you couldn’t really generalize how women will experience PPD in their lifetime; they will fall somewhere along the spectrum, and it’s not the same for everyone.

Unfortunately, recovery isn’t a straight line, and Hayden re-entered a facility the following year. Upon her return, she said she was grateful to have support through the tough time and that her time away from her family actually enabled her to become a better mother.

In 2018, Hayden and her fiancé Wladimir Klitschko went their separate ways after nearly nine years together. He was awarded full custody of their daughter owing to Hayden’s mental health struggles, and both father and daughter promptly moved to Ukraine. Though Wladimir and Hayden are on good terms and have been able to build a cohesive co-parenting arrangement, Hayden hasn’t been able to see her daughter much over the last four years.

An insider told US Magazine in 2019 that Hayden “knows the child being with her is not best for [Kaya right now]” and that it’s a “sad situation” for all parties involved. In 2022, as the conflict between Russia and Ukraine unfolded, Hayden took to Instagram to voice her support for the people of Ukraine and shared that her daughter was “safe” and had been removed from Ukraine. Meanwhile, Wladimir remained home to fight for his country.

I think I’m all the stronger for it. I think I’m a better mom because of it, because you never take that connection for granted.

As if navigating a harsh child custody battle wasn’t distressing enough, Hayden also hasn’t had the healthiest relationship with her current boyfriend. In August 2018, numerous press outlets reported that Hayden entered into a relationship with actor and real estate agent Brian Hickerson after they were set up by mutual friends.

Hayden fell madly in love, and went on record stating she’d be open to marrying him in the future. “I learn something new from [Brian] every day, and that’s something that not many people can provide me with,” Panettiere told US Magazine in February 2019.

However, things weren’t as idyllic behind the scenes, and Hayden’s optimistic outlook on Brian may have been masking underlying issues among the two. A few months later, Brian was arrested for domestic violence after neighbors reported a verbal altercation at their home. The authorities subsequently found “redness and marks” on Hayden’s body. Though Brian was promptly charged with domestic violence and forbidden from contacting the Heroes star, he found a way to crawl back into her good graces.

Sadly, the incident was repeated a year later when Brian was arrested for hitting Hayden with “a closed fist on the right side of her face.” This time around, Hayden chose to open up about the abuse she’d been enduring and sought an out-of-state protective order against him.

I am prepared to do my part to make sure this man never hurts anyone again. I’m grateful for my support system, which helped me find the courage to regain my voice and my life.

Brian’s legal troubles continued, however. In total, he was charged with eight counts of domestic violence and assault and one count of intimidating a witness. He pleaded no contest to both and was sentenced to one and a half years in prison for both sets of charges.

Upon his release from jail just a few months later, he was seen dancing with Hayden at a bar in Los Angeles. As of March 2022, the pair are back together, and an insider reported that Hayden genuinely believes Brian has turned a corner and is looking to better himself. Unfortunately, though, the two were recently involved in a bar brawl at the Sunset Marquis hotel in Los Angeles.

Whether Hayden Panettiere, Another Celeb or Anyone – Don’t Pass Judgement

From an outsider’s perspective, Hayden Panettiere’s life is clearly a complicated situation, and she shouldn’t be judged too harshly for reconciling with her abuser. There are many nuances to domestic abuse, and no one party should have to explain themselves for making their choices.

What we have to remember is that we can’t make judgments about someone’s career or background without knowing what’s truly happening in their life. Just because someone has been quiet and seemingly dropped off our radar doesn’t mean they’re not very busy doing other things. The focus should be on ensuring that they’re okay and extending in their direction some well-intentioned empathy: we might not be able to help, but at least we can try to understand.