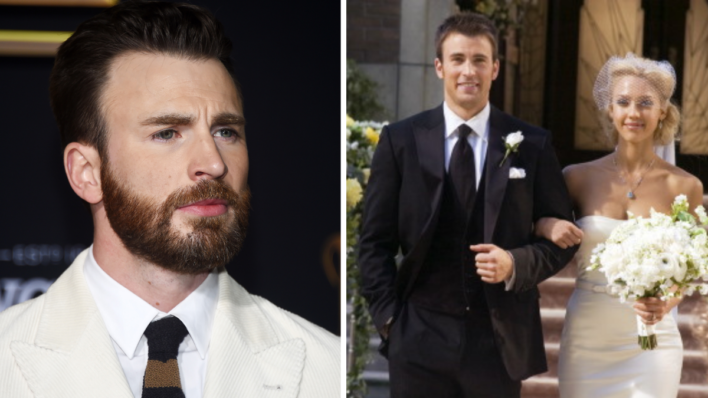 One of the world’s most eligible bachelors, Chris Evans, opens up about his views on marriage and raising a family.
By Shaoni Das    August 10, 2021

One of the world’s most eligible bachelors, Chris Evans, opens up about his views on marriage and raising a family.

Chris Evans, commonly described as one of ‘internet’s boyfriends,’ is a catch by all means; he’s handsome, charming, funny, kind, passionate, respectful — the list goes on and on. Yet he’s forty and hasn’t yet had the fortune of being married or becoming a dad. Most of his peers have done at least one by now, if not both, and probably a few times over.

So what’s holding Captain America back? Most people just take a glance at him and make up their minds about his personality. Perhaps he’s a commitment-phobic philanderer, the rakish Lothario who would rather spend his time wooing several women at once than settle down with one. Maybe he’s a lovesick wretch, pining for the one that got away, suffering in ceaseless heartache. Perhaps he doesn’t swing in the heterosexual direction at all. The rumors abound, as they always do.

Here’s what one of the most eligible bachelors in the industry has to say about his love life:

Chris Evans will be the first to tell you it’s not for lack of trying. He genuinely desires a wife, a flock of young children, an idyllic home with a white picket fence, the whole nine yards. “I want a wife, I want kids,” he told Men’s Journal in 2019. “I like pretty pedestrian, domestic things.”

Just because he’s a high-profile Hollywood actor doesn’t mean he’s any less inclined to partake in the ordinary routines that the rest of us choose to undertake. Ultimately, it’s up to each individual to decide how they want to pursue their life and the connections they want to forge with other beings. Chris, for his part, doesn’t like to think about it in an overly intellectual or enlightened fashion; he wants to experience the most mundane but meaningful pleasures — something he’s missed out on due to his last twenty years in show business. Yes, he’s had his moments of “self-exploration” in his twenties, as per his own account, but his thirties have set in motion a completely new set of realizations. He’s ready to shed off the “self-indulgence” and focus on committing himself to someone else.

I really want kids. Yeah, I do […]  like ceremony. I want to carve pumpkins and decorate Christmas trees and sh*t like that.

He told the journal he’s a disciple of “ceremony,” someone who still values the traditional way of life, someone who is still drawn to the romance of marriage and the stability it offers. He would do anything to build such a haven but hasn’t had the best luck so far in finding the right person to do it with. His last known relationship was with comedienne Jenny Slate, which ended with a surprisingly uplifting note. Since 2018, he’s been linked to a few women here and there, but nothing concrete that could help him fulfill his ultimate aspiration. It doesn’t mean he’s not thankful for his professional achievements or the impact he’s made on the world; in fact, his career allows him to flourish and find prosperity away from the private side. At worst, it’s an excellent distraction to keep him from wallowing in his failures and yearnings. Still, the heart wants what it wants.

At the same time, the Knives Out star understands it’s not as simple as clicking a button and conjuring a bride. There’s a sequence you have to follow if they want to find love for the long haul, and it’s by far one of the most arduous procedures you’ll ever face. “I want it to happen. But there has to be a series of events prior to that which have to fall into place,”

You can’t just assemble a family like The Avengers and hope to tackle every challenge with unlimited strength and spirit; you need to set up a solid, robust foundation to make the magic happen. To begin with, you need to establish a powerful rapport with your partner and feel as passionately for them as you would for potential children. Chris said he doesn’t think it’s healthy for couples to add young ones to the mix unless they’re actually ready for the journey and can function as a fully synced unit. “The family only works if it’s built off the extension of the love you feel for a person,” he told USA Today. In his view, if you long for a kid far more than you look for the relationship, you’ve already started off on “shaky ground.”

When you’re old and on your death bed, looking back at your life it’s not going to be the films you’ve made or what you’ve accomplished, it’s the relationships you have. You’re survived by things that matter—the people you love and those who love you back.

Chris’s conviction about his purpose in life, as well as the type of relationships he wants to cultivate in the near future, speaks volumes about his character. He’s a family-oriented fellow through and through and would do just about anything to honor his loved ones. The Massachusetts native has said his global fame pales in comparison to the affection he feels for his dear family and siblings. When you’re old and reflecting on your existence, you’re going to remember the people that made a tangible difference in your life, not so much the trivial professional stuff. “You’re survived by things that matter – the people you love and those who love you back,” he told Glamour UK. Not everyone has the same attitude about their legacy, but Chris still prefers to approach it with an old-fashioned lens. Your children don’t have to be your only legacy, but there’s something beautiful about immersing yourself in their upbringing and centering your world around them.

Chris’s desperation at forming his own family marks a rarity when it comes to vulnerability and masculinity. It’s not every day that men in Hollywood feel empowered to share their hopes and fears regarding their future. It’s an entirely natural process, one that everyone deals with, yet men feel pressured to keep their emotions under wraps. They’re discouraged from seeming too sentimental or tender as they are to play the role of the cold, steely breadwinner who isn’t supposed to ‘relish’ fatherhood. Chris Evans’ dewy-eyed enthusiasm about potential fatherhood alone indicates how he’ll excel in the role of a dad.

Don’t be afraid to speak up about your aspirations

As Chris continues his search for The One, we must acknowledge the courage that enabled him to speak his mind and be vulnerable for a moment. You might be an A-list blockbuster draw, but none of the attention truly matters if you don’t have loved ones to spread the love with. Not everyone is going to want to develop their own biological family, but those who do shouldn’t be shamed or slighted for it.  Instead, we should feel proud about admitting our desires and taking measures to actualize them. Sometimes, it’s an uphill battle, and as they say, you’ll have to kiss more than a few frogs to meet your match, but if you’re able to lay the foundations of love, there’s no doubt you’ll be able to succeed at what awaits you.

As for Chris Evans, we can’t wait to see what the future holds for him.