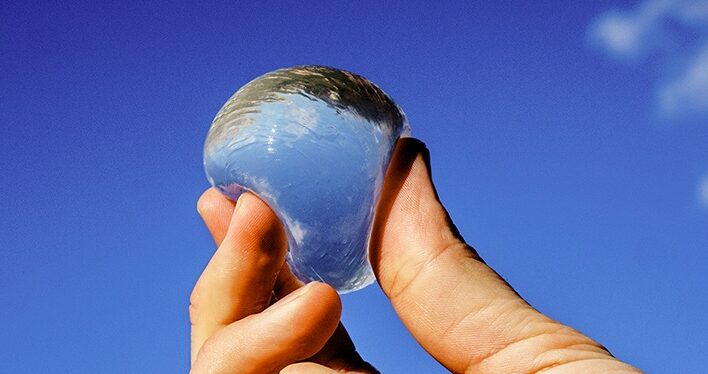 Edible Trash Is Now a Thing – And It’s Quite Delicious

With even the remotest islands in the world polluted by plastics, cutting down on our waste has never been more
By Eliza Theiss    January 30, 2018

With even the remotest islands in the world polluted by plastics, cutting down on our waste has never been more important. Single-use plastics like go-cups and grocery bags are some of the biggest culprits and fortunately some of the easiest to eliminate. Thirsty? Get an edible water and skip the plastic bottle. Tired? Grab coffee in a delicious mug that you can eat. Hungry? Eat your plate.

Thinking of how to cut down on waste, he came up with the revolutionary idea of edible cutlery.

Making the first millet, rice and wheat edible spoon in 2010, Peesapaty’s company Bakeys has now sold millions of edible tableware items and has continued to grow the business and its offering. You can now buy the 100% natural, biodegradable and vegan items in a variety of flavors, including sweet, savory or plain.

Born from a century’s experience in milling knowledge, Jerzy Wysocki’s wheat bran edible plates and cutlery pushed his family’s heritage and craft into the future.

Produced in Poland at an environmentally-friendly facility, Biotrem edible tableware naturally biodegrades in 30 days, and is oven- and microwave safe, handling temperatures of up to 350 Fahrenheit. The eco-friendly products use minimal processing, water and energy to manufacture – 1 ton of wheat bran can be turned into 10,000 plates. Cold meals can be served from them as well, and the bowls offer the perfect opportunity for some old-timey eating – Game of Thrones foodie-marathon

So you’ve had a delicious lunch, eating every last morsel – including the washing up – and you feel thirsty. Instead of going with the usual plastic water bottle, Skipping Rocks Lab is offering a revolutionary new concept: edible water.

Dubbed “oohos”, the edible water bubbles come in a seaweed membrane that’s edible and biodegradable, substantially cutting down on plastic use. Skipping Rocks Lab has already won numerous awards for their revolutionary new design and raving reviews are pouring in, with fans including French president Emmanuel Macron.

#MacronMondays…. The French president was Oolala for Ooho! Who’s next? pic.twitter.com/o9HXjFaAP9

For those with a taste for craft beers, Delray Beach, Florida-based Saltwater Brewery is about to launch the world’s first beer with biodegradable six-pack rings. In fact, the rings are perfectly edible for sea life and are made from brewing byproducts like barley and wheat remnants.

We are beyond excited to announce that the Eco Six Pack Rings have officially launched! After months of prototype testing and product improvement, the #E6PR featuring #ScreaminReelsIPA is available to purchase here in the @Saltwater_ReefRoom and in select #SouthFlorida stores such as @Publix, @TotalWine, @WholeFoods, @LuckysMarket, and @ABCFineWineSpirits. #saltwaterbrewery #sixpackrings #ecofriendly #environmentallyfriendly #saveourseas #gogreen

The invention could be a major game changer in plastic pollution, which severely injures and kills more than one million seabirds and 100,000 sea turtles and marine mammals each year. Definitely drinking to that!