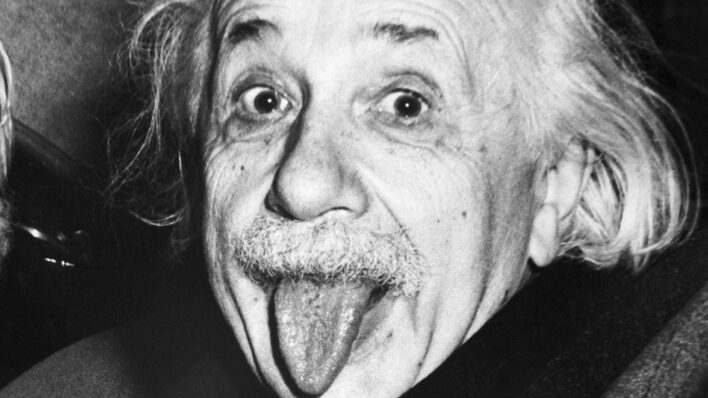 Einstein Didn’t Say That: Why the Genius is Misquoted So Much

Albert Einstein was an indisputable genius of physics. He has said many great and eminently quotable things, so why has he been so widely misquoted?
By Aly Walansky    August 12, 2019

Albert Einstein was an indisputable genius of physics. He has said many great and eminently quotable things, so why has he been so widely misquoted?

Albert Einstein was an indisputable genius of physics with an overwhelming passion for science and theory. He has said many great and eminently quotable things — so why, in the time since his death, has he been so widely misquoted?

What does this say about Einstein, and our own theories of what makes someone a genius?

A genius is a person who displays exceptional intellectual ability – but sometimes a common misconception is that someone must be a genius in all topics and areas, versus having a specific knowledge and special ability born of great focus and dedication. Einstein, for example, was a brilliant physicist, but was not an exceptionally talented painter.

The risks of putting “genius” on a pedestal is that it feels universal in knowledge, and in effect undervalues everyone’s own ability to excel in their area of focus or passion.

Creativity is knowing how to hide your sources.

The difference between genius and stupidity is: genius has its limits.

Never attribute to malice that which can be adequately explained by stupidity.

If you are out to describe the truth, leave elegance to the tailor.

Chance is perhaps the pseudonym of God when he does not want to sign.

Every now and then a man’s mind is stretched by a new idea or sensation, and never shrinks back to its former dimensions.

Why is he misquoted?

Albert Einstein was a brilliant scientist who changed the world in many ways. Science was his field and his specific passion. It makes sense he’d be quoted on science and innovation, he was, of course, an expert. But why are pithy and thoroughly modern sound bites about life philosophy misattributed to him?

We live in a culture where we live and die by our belief in its hierarchy. Everything is about steps on a ladder, and everyone is obsessed with climbing up that ladder and fears falling backward on it instead.

“The beauty of a free, capitalistic society is that any person, no matter what their starting circumstances, can make it to the top of the food chain,” said Robert Kandell, known as “The Modern Mantor” and an relationship and communications expert.

Of course, no belief structure is without its flaws, and risks are everywhere. The challenge of this belief system is that when someone does to make it to that top of the “food chain,” regardless of how they got there, we tend to blindly believe their skills, intelligence and motivations.

“We put them on pedestals and make them into our heroes and believe that their insights and viewpoints have more weight than others,” said Kandell.

The problem of course with pedestals is that they are very dangerous – you can always fall off. And when our heroes lose their footing on the top of that food chain, we all have our own belief system shaken to its core.

Einstein became famous practically overnight when his theory of relativity, published in 1905, was proven true in 1919 by Arthur Eddington, renowned English astronomer and physicist. His work overturning the centuries old Newtonian physics was a media sensation after the New York Times and The Times of London published his work.

Most people fantasize about that moment when they reach the top of the ladder of whatever their field or specialty or passion is.

“They want the fame, money, power and external validation,” said Kandell. “We pick our heroes like Einstein and give them more cred because we want to be just like them. “

Until we get to these heights, we then have to believe that we are less than because we have not received the same accolades. “The cure for this process is to develop one’s own internal validation system,” said Kandell.

We all want to know, no matter how many rewards we win and how great people tell us we are, that we’re doing the right thing, and we’re doing it well. External validation is just the icing on the cake.

Einstein, of course, has an obvious validating quality.

Anything attributed to him will automatically sound smarter and more valid because he is, in fact, a genius.

This validation, however, discards the reality that he was a master of a specific field — not every field. Remembering that helps us remember that same truth in all of us – maybe we aren’t master physicists, but probably all of us have one focus we’re especially skilled at. And rather than be disappointed that we are not great at everything, we should celebrate what we do excel at, and enjoy our knowledge we possesses that talent and ability.

Stop putting genius on a pedestal as an untouchable goal. We all have some sort of genius within us waiting to be developed. Let it be nurtured and enjoyed!