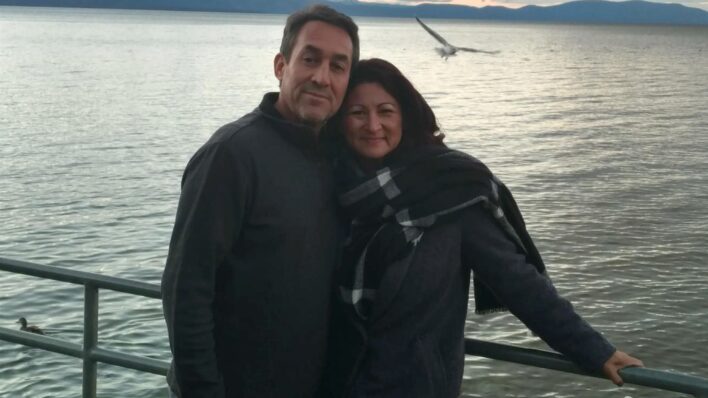 After their kids left home, Elena and Bill Rodriguez began eating out more, and settled into a sedentary lifestyle. Motivated
By MJ Kelly    November 16, 2018

After their kids left home, Elena and Bill Rodriguez began eating out more, and settled into a sedentary lifestyle. Motivated

After their kids left home, Elena and Bill Rodriguez began eating out more, and settled into a sedentary lifestyle.

Motivated to increase their likelihood of being around to watch their eight, grandchildren grow up, the couple committed to losing weight together.

Bill, 57, wasn’t as active as he used to be and stopped paying attention to the size of his servings as the couple adjusted to its empty nest. His weight increased steadily, and he couldn’t deny the age factor.

“As you get older your system starts slowing down, and with that your weight starts going up. It’s such a gradual thing you don’t really notice it,” Bill told NBC News. Then you see a picture of yourself and think, ‘Wow, my face really filled in.’”

Elena, 48, struggled with her weight for nearly 30 years. Following her first pregnancy and a battle with depression, she saw her weight go from 120 to over 200 pounds. At her heaviest, she weighed 237 pounds. After Bill found out one of his co-workers had been able to lose a lot of weight through Profile by Sanford, a personalized weight loss program, he brought it up with his wife.

Elena was skeptical at first, having tried many diets and weight loss plans in the past, without much success.

“I’m 48 and my goal was to lose weight by the age of 40. That never happened — I had let myself down,” she said. “Everything else had failed. I was at the last straw. “I felt like if this doesn’t work, nothing will.”

After weighing the pros and cons, Elena and Bill decided to give the program a try, together. The plan cost each of them $150 a year, which in itself was enough to keep Elena motivated to see it through. They started by making changes to their diets, swapping fatty and fried junk foods for loads of steamed and raw vegetables, while they increased their water intake.

“They give you a shopping list of items to go look for to make your meals. It really just teaches you to eat better,” said Bill.

They started cooking together and encouraged each other every step of the way, keeping one another in check and accountable.

“I think the fact that we did it together was a key factor, and that the things we changed really fit well with us,” he said. After losing her father to a stroke when he was only 66, Elena knew the timing was right.

Together, Bill and Elena have lost 130 pounds combined and their efforts continue to pay off — their health has improved, they’re more active and are reaping financial benefits as well. Most of all,  they’ve learned that setbacks are only temporary, so long as you don’t give up.

“I feel better from the ground up. Even our sex life is better,” said Elena. “Profile has redefined who I am — my body and my spirit.”