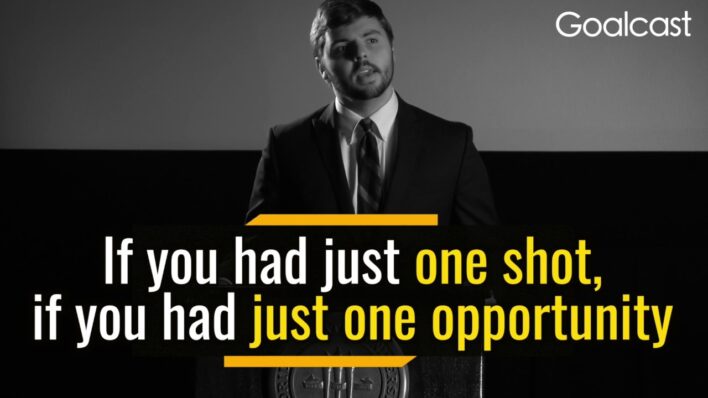 Michael Shelfer – Set Your Mind Ever wonder how Eminem’s ‘Lose Yourself’ would sound as a commencement speech? Well, here
By Goalcast    April 3, 2018

Michael Shelfer – Set Your Mind Ever wonder how Eminem’s ‘Lose Yourself’ would sound as a commencement speech? Well, here

Ever wonder how Eminem’s ‘Lose Yourself’ would sound as a commencement speech? Well, here you go, mom’s spaghetti and all.

If you had just one shot. If you had just one opportunity to seize everything you ever wanted, in one moment, would you capture it? Or would you just let it slip? If you think you know the right answer, let me just say that when I was sitting in your shoes, my palms were sweaty. My knees were weak, and my arms were heavy. When I got to the theater, I almost immediately threw up on my favorite sweater which sucked, because it was my mom’s spaghetti which I was never gonna get back Obviously, I was nervous. But, on the surface, I looked calm and ready to drop bombs on the audience. That was my job as an actor, after all, to put on an act. As soon as I walked on stage, I opened my mouth, but the playwright’s words were not being spoken. The whole crowd booed so loudly, no words were being said. I choked. Some people even started laughing.

I tried to redeem myself on stage, but I ran out of time. The clock had run out, and blap, my 15 seconds of possible fame were over and I had to snap back to reality. Gravity brought me back down to Earth. When people saw me on the street they would say, “Oh, there goes the rabbit from Harvey, who choked.” It made me furious. But I wasn’t gonna give up that easily. I knew I had the talent to make it, despite the fact that I was broke. When I would go back to my run-down apartment, that’s when I decided to write my own material for the stage; I wrote my own plays, my own rhapsody, if you will. Because I decided to capture the moment and not let it pass me, I controlled my own destiny and allowed myself to achieve massive success as a stage actor on Broadway.

And here I am today, humbly, so humbly, passing my story down to all of you. If you take away nothing else from what I say, at least take away this: If you want to succeed in the real world, then you better lose yourself in the music of life. Lose yourself in the moment. You own it. And you can never let it go. Most likely, you will only get one shot, and even if you blow it, you better not miss out on your chance to blow it. The opportunity that lies before you comes only once in a lifetime. Control it, because you can do anything that you set your mind to.