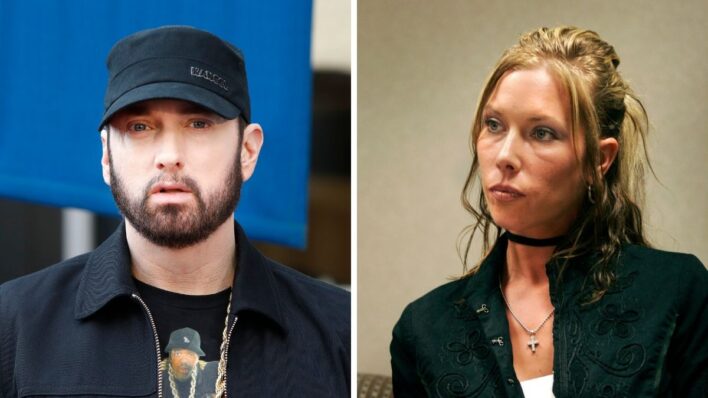 Dating after a divorce is not easy. Eminem speaks about the struggles he’s faced with trusting and letting someone new into his life.
By Shaoni Das    August 12, 2021

Dating after a divorce is not easy. Eminem speaks about the struggles he’s faced with trusting and letting someone new into his life.

Who would want to take relationship advice from Eminem?

The rapper has a history of bad behavior and poor decision-making, not to mention emotional and physical abuse, so you’d be forgiven for disregarding his opinions on modern romance and human connection. With that being said, it’s also crucial to acknowledge the measures he’s undertaken over the years to acknowledge his wrongdoings and make amends with the people he’s hurt.

His ex-wife Kimberly Anne Scott suffered plenty, having been explicitly referenced in the majority of Eminem’s tunes, which generally lean on the side of crass and insensitive. Yet, outside of this one high school sweetheart, Eminem hasn’t been romantically involved with anyone in a long time — at least not to the public’s knowledge. As a matter of act, his domestic affairs are completely surrounded by a shroud of secrecy, and unless he deliberately chooses to clue us in through a musical verse, we’ll remain none the wiser.

The man has mastered the art of tactfully separating his public and private identities, but on the rare occasion that he does open up, there’s value in taking note of his perspective and seeing how it can apply in our own lives.

In an interview with Vulture, Eminem reveals the pitfalls of dating post-divorce and why it’s particularly challenging to pursue love with his level of celebrity. Not only does he have to convince every woman he is a changed man, but he also has to ensure the public doesn’t catch wind of the potential romance. He’s in his late forties, notoriously aggressive, has a tumultuous past that you can’t really justify, and is routinely feuding with many of his peers in the hip-hop space, sometimes all at once. There’s a lot you would have to overcome if you want to give Eminem a shot, and so there’s an added layer of hardship on his end to navigating this convoluted, ever-fluctuating social scene.

Since my divorce I’ve had a few dates and nothing’s panned out in a way that I wanted to make it public […] Dating’s just not where I’m at lately.

Eminem shared he’s tried his hand at meeting women and establishing an intimate connection with them, but nothing’s worked out in his favor. As a result, it’s impacted his desire to put himself out there in the first place, and he doesn’t think it’s worthwhile at this point to dedicate his energy to these endeavors. He downloaded Tinder, gone to strip clubs, took part in setups, but if it’s not meant to be, it’s not meant to be. “It was an interesting time for me,” he said. When asked if he feels lonely, he laughs off the question and says, “Am I lonely? No, I’m good. Thanks for asking though.”

Eminem’s plight is relatable in that it’s all too easy to get discouraged by dating prospects. We’ve all been here: if you have a couple of bad encounters, you might be inclined to revert to your comfort zone immediately. It becomes more of an uphill battle as you get older: your patience wears thin, you’re not looking to experiment as much, and you just want someone to understand you and where you’re coming from. You expect a certain level of maturity from the other person, and if they can’t deliver a precise configuration of kindness, love, and respect, why even bother?

He reveals the real reason why he prefers to remain single

There’s something to be said about a man who is able to maintain such a high standard of privacy in this day and age. Yes, he’s said and done some truly horrendous things, some that don’t inspire the slightest bit of confidence in his ability to be a good partner, but he’s also at a different phase of his life, a critical juncture that could make or break his legacy.

Even his most zealous supporters wonder why Marshall Mathers is so secretive about his romantic side. Surely, it exists, so why has he been so resistant about disclosing any information to the public, especially if it could subvert expectations and portray him in a more sympathetic light? There has been longstanding speculation about his sexuality or lack thereof, whereas others assume he’s still pining for Kim.

Eminem says it’s because he has deep-rooted trust issues and therefore isn’t fond of placing confidence in someone who could potentially hurt him or exploit his influence. He has a hard time distinguishing those whose motives are nefarious and those who are genuinely well-intentioned. He doesn’t want to give his everything to a woman, only to have her take advantage of his vulnerability and make off with a portion of his wealth.

I have trust issues. With women, friends, whatever. You always wonder what their real motives are.

Besides, it’s too much of a gamble to take the woman out in public and attract a horde of paparazzi, capturing every moment of the date. “Going out in public is too crazy,” shared the father-of-three. We, as ordinary people, take these experiences for granted: going out to see the movies, dining out at a fancy restaurant, going to the amusement park. We’re able to soak up the moment without feeling threatened by scrutiny or judgment. When you’re Eminem, however, you have to be careful about each and every move.

Despite his misgivings about dating post-divorce, he hasn’t totally given up on the idea of finding the special person. “I mean, I’d like to be in a relationship again someday. Who doesn’t? It’s just hard to meet new people, in my position,” he told Rolling Stone.

But he has to account for the numerous traps laid out in his path. If your heart is not in it and if you don’t think it’s worth your time, what more can you do? Yet, the beautiful thing about growing older is becoming attuned to your own preferences and desires, so you’ll have an easier time identifying the bad apples. Also, it’s about longevity at this point, so you’re less focused on the vain, material pleasures that might have dominated your youth and more concerned about the quality and the integrity of the person you’re seeing.

Don’t push yourself for something unless you’re ready

Eminem’s familiar case reminds us it’s never worth it to push yourself towards a new chapter unless you’re well and truly ready for the change. Yes, it’s never too late to undertake new responsibilities and discover new adventures, but you also have to be in the right mindset. Dating will seem impossibly strenuous at times, and you’ll likely consider quitting the whole song and dance. Yet, instead of shutting the door on romance for good, you can just press pause and take a step back. Gain a fresh perspective, prioritize other areas of your life, and come back to the same point when you’re ready. As mentioned, it’s never too late, so you shouldn’t worry about some imaginary clock.