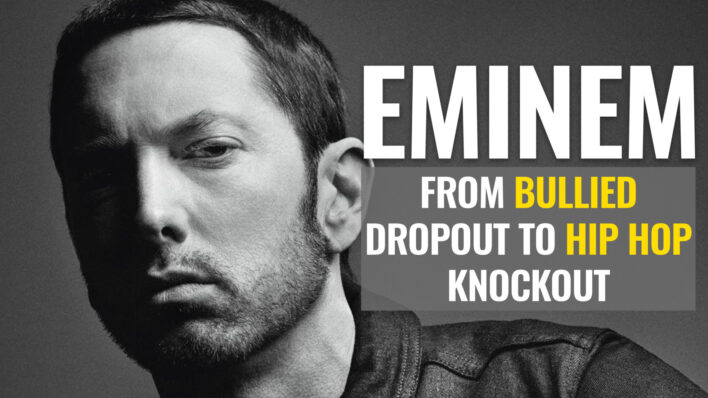 Eminem is well known in the entertainment industry for possibly all the wrong reasons. His countless run-ins with the law
By Jenny Medeiros    January 24, 2018 Eminem is well known in the entertainment industry for possibly all the wrong reasons. His countless run-ins with the law and controversial lyrics have continually shocked, outraged, and fascinated millions. With blatantly violent records ranging from choleric to downright hilarious, Eminem has earned himself global recognition and an evergrowing fanbase.

Although if you look beyond his rebellious music and sensationalized court cases, Eminem is a dedicated father and artist with a passion to prove himself to those who doubt him. With years of highs and lows to get to where he is now, Eminem is proud to tell the story of his struggling beginnings.

As a scrawny outcast bouncing between schools and sketchy neighborhoods, he had his work cut out for him. There was no glitter or glamour while he earned $5.50/hr washing dishes or when he found his trailer home robbed of everything except the bed. From bullied and broke to best-selling Hip Hop artist, Eminem shows us why giving up is not an option.

Growing up as a misfit

On October 17th, 1972, Marshall Bruce Mathers III was born in St. Joseph, Missouri, to a 15-year-old mother and a runaway father.

He and his mother bounced between Missouri and Michigan – never settling anywhere long enough for Marshall to call it home. They lived in public housing projects as his drug-abusing mother failed to hold a job for more than a few months at a time. Eventually, they settled in a reputedly rough neighborhood in Detroit, where gangs would frequently bully Marshall for reasons he didn’t yet understand.

Things weren’t much better for him at school. Marshall was always the “new kid” so he made very few friends and mostly kept to himself. He was smart but did badly in almost every subject – all except English. Marshall found the power of words fascinating and would study the dictionary to expand his vocabulary. He also loved comic books, devouring them daily and dreaming of illustrating his own comic books in the future.

At nine years old, his shy and reserved nature made him a target for older students. He was cornered in the hallways, shoved into lockers, and beaten up in the bathroom. One episode of bullying sent him to the hospital with cerebral hemorrhage, where he drifted in and out of consciousness for five days. He would write a song about it years later, called Brain Damage.

As the bullying continued and he began having nightmares, Marshall opted to skip school. His grades plummeted and before he knew it, he had failed Grade 9 three times over. There seemed to be nothing going for him until his Uncle Ronnie played him his first rap song – “Reckless” featuring Ice-T. He was instantly hooked. Fighting for the chance to rap

While scrounging for work under the threat of being kicked out by his mother, Marshall poured his heart and soul into the only thing that mattered: music.

At 14, he began rapping with a high-school friend. They frequently skipped class to participate in freestyle rap battles at a nearby school’s lunchroom. Soon enough, Marshall felt like he needed to earn the approval of more than just the high-school crowd. In preparation, he took his initials and renamed himself as “M&M” – which eventually became “Eminem”.

On Saturdays, he and a handful of budding rappers squeezed into open mic contests at the Hip-Hop Shop on West 7 Mile. Being a white boy in a predominantly black scene, he stood out for all the wrong reasons and was constantly booed on stage. However, Eminem was determined to gain their respect and never missed a single battle. It didn’t take long after he opened his mouth to become known as a force to be reckoned with. His fierce rhymes and creative insults often left his opponent stepping down from the stage in surprise.

At 24 years old, with a daughter on the way and an unrelenting need to prove himself, he released his first album called Infinite. It was almost entirely about his upcoming child and was majorly ignored by local DJs and radios. The criticism was brutal and many told him to “go into Rock & Roll instead.” It seemed like the end of the line for Eminem’s career in rap – except he had no intentions of quitting.

Sometimes you just feel tired, weak. When you do, you gotta find that inner strength, that motivation to not give up. Fired, evicted, and chasing the dream

With the doubt of others spurring him on, Eminem wrote and practiced his rhymes with renewed rage and purpose. He would even rap the food orders he received at Gilbert’s Lodge – a family-style restaurant where he cooked and washed dishes. After the birth of his daughter, Hailie, Eminem worked over 60 hours per week before he was suddenly fired.

With no job, a failed career, and his girlfriend leaving him, Eminem was at an all-time low. He stopped writing music and began taking painkillers to get through the day. While living alone in a crime-ridden neighborhood and unable to see his daughter, he took one too many in an attempt to end his own life.

Fortunately, his suicide attempt was unsuccessful and Eminem soon returned to his music, crafting angrier and moodier tracks than ever before. One day, while on the toilet practicing new rhymes, an idea popped into his mind. Maybe his youthful rage could be included in his music using an alter ego. And so “Slim Shady” was born, a cutthroat personality Eminem would use to channel his darkest thoughts.

At 25, with his eye on the first prize of $500 and a Rolex, Eminem decided to try his luck at the 1997 Rap Olympics in L.A. The night before the event, he came home to a locked door and an eviction notice. Eminem had nowhere else to go, so he broke a window and climbed in. There was no heat, no water, and no electricity – but he slept on the floor nonetheless, anticipating his upcoming opportunity of being heard by top rappers. Losing the battle but winning the war

Eminem was never a confident person, so standing on a stage in front of hundreds of people was no easy feat. But as soon as he held the mic, his fear disappeared and all his pent-up rage came through in his lyrics. By the end of the Olympics, a man in the crowd yelled “Just give it to the white boy. It’s over!” But the judges refused and gave him second place instead.

Eminem was crushed. He returned broke and humiliated to live with his mother, girlfriend, and daughter in a routinely robbed trailer home. However, a copy of his performance was recorded on cassette and passed around. It eventually made its way to the ears of rap producer Dr. Dre – who was instantly impressed. Dre brushed off the resounding criticism and sent out for Eminem, who was undoubtedly astounded that one of his idols wanted to see him.

Soon after, Eminem ambled into Dr. Dre’s recording studio, with bleached blond hair and a bright yellow sweatsuit. Dre had his doubts upon seeing him, but those vanished as he witnessed Eminem blurt out the rhymes for “My Name Is” on the first try. A single that would later earn the young rapper worldwide acclaim.

At 27 years old, Eminem was still struggling to pay rent for his trailer home when his album Slim Shady LP was released. It was like nothing ever heard before in the rap scene. His alter ego “Slim Shady” proved to be a ruthless comedian, combining childish humor with homicidal rage. Shady’s lyrics reflected the adversity in Eminem’s life and his dreams of revenge for those who wronged him.

The album was an instant success, selling over three million copies and winning Eminem a Grammy Award. With money finally rolling in, his very first purchase was a house for his family in a safe neighborhood. Over the next few years, Eminem released a handful of albums which became top hits worldwide. However, they also sparked a firestorm of criticism due to his controversial lyrics. Fame hit Eminem like a ton of bricks, and his dream of becoming a renowned rapper soon turned into a nightmare.

When he wasn’t being besieged by lawsuits and spiteful family members, he was dogged by the paparazzi and crazed fans. In 2002, while working over 16 hours a day on his movie 8 Mile, Eminem came to a breaking point. He ate nothing but fast food and sleeping pills, becoming unrecognizable to his fans and leading him to another near-death experience.

The prospect of leaving his daughter alone urged him to attend church meetings and rehab. With the help of an unlikely mentor – Sir Elton John – Eminem returned to his music in 2008. He now had a more positive perspective, making his latest records more upbeat and inspirational for those struggling with similar situations. He went on to win a Grammy Award for Best Rap Album.

After a lifetime of fighting his way to the top, Eminem had finally earned the respect of major league Hip Hop artists and more. He is an acclaimed rapper, writer, producer, and even actor. Today, he continues to produce successful records while taking care of his daughter. He also takes time to work with at-risk youth, helping them overcome the same hurdles he once faced.

Regardless of your stance towards his music, Eminem’s life story is an inspiration to anyone who feels like it’s them against the world. He makes a point to tell those feeling hopeless that even when no one believes in you, you have to be the biggest fan of your craft. He insists that you never give up in the fight to prove the world wrong. Because in this crazy, unpredictable life – you have one shot, one opportunity – to make yourself proud.

Don’t be afraid to try. You can always make something of your life.