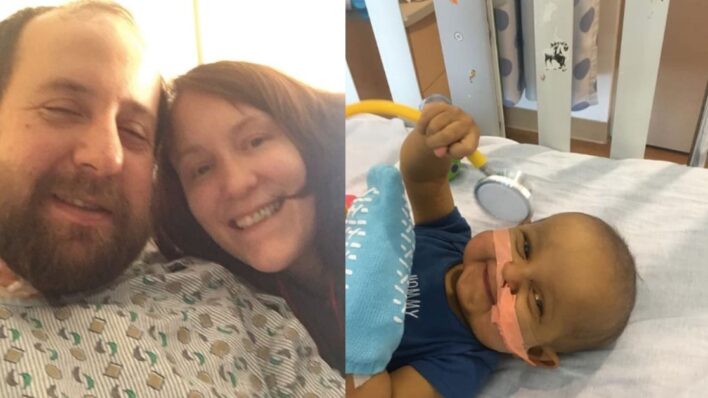 Sean Kelley decided to lose weight in order to qualify as a donor for his son, who suffers from a rare genetic condition called Alagille syndrome.
By Aly Walansky    January 23, 2020

Sean Kelley decided to lose weight in order to qualify as a donor for his son, who suffers from a rare genetic condition called Alagille syndrome.

Many reasons can motivate someone to lose a few pounds. Perhaps, we want to fit into that new outfit or look great for a specific occasion. Or, we want to be generally healthier and prevent complications in the future.

But for Sean Kelley, losing weight was about saving a life. And no, it was not his own.

New Yorker Sean Kelley decided to lose the extra weight when he knew he needed to do so to qualify as a living liver donor for his baby son Sawyer.

The newborn received the devastating diagnosis of Alagille syndrome at birth and needed a transplant to survive, according to WYFF News 4. Alagille syndrome is a rare genetic disorder that causes liver damage and can also target other vital organs such as the heart. The only thing that could save him would be a transplant.

Kelley’s wife, Josie, also suffers from Alagille syndrome, which made her ineligible to donate any of her liver, making Sean the best, and maybe only, viable candidate.

“There’s no reason that I can’t get down to the weight that I need to see if could I be a match as well,” he told Good Morning America.

I didn’t know if I would be a match for Sawyer or not, but to even go through the evaluation process, I had to get my weight down to a certain point.

Sean and his wife have six other kids. The condition already affects three of them. It was no difficult decision for Sean to make, when Sawyer’s condition was declared to be drastic enough to require an organ transplant.

But was he a perfect match?

Sean started working out more in August 2019, and ultimately dropped 40 pounds, all the weight he needed to lose to qualify for the testing needed to become a donor.

Not only did he manage to lose the weight, but it turns out that he was a match for Sawyer. When he received the news, he almost couldn’t believe it.

She said, ‘Guess what? You’re a match. The surgery’s scheduled.’ And I literally had to sit down.

The transplant surgery took place on December 19 2020. It was “complex and challenging,” as Dr. George Mazariegos, the chief of pediatric transplantation at UPMC Children’s Hospital in Pittsburgh, told Good Morning America. However, the prognostic is positive.

“He will be much healthier, we believe, with this liver, and be able to withstand infections and withstand things that right now were really big setbacks for him,” the physician said of baby Sawyer.

The power of a parent

Sean hopes that his story will inspire others to donate. Even if the process was undoubtedly stressful, he still feels that there was also a lot of hope and positivity in the process.

It’s an incredible thing to even consider being evaluated and going through the process to see if you could be a match for somebody.

Sean’s story proves that we should never underestimate the difference one can make on oneself and others. Becoming a donor can save someone’s life, but also help others connect forever. Sean will be able to see his son grow up but so will the others whose children, spouses, family members or friends have been saved by organ donors.