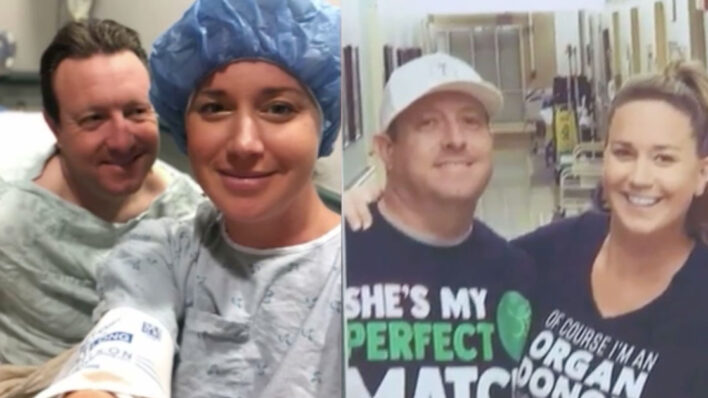 Dan Summers took a leap in looking for love online. He didn’t just find the love of his life– he found a life-saving organ donor.
By Aly Walansky    December 9, 2019

Dan Summers took a leap in looking for love online. He didn’t just find the love of his life– he found a life-saving organ donor.

When Dan and Lisa Summers met online, they knew they had found love and that their lives would never again be the same – they had no idea how true that ended up being. Not only did they find love, but that match ended up being a life-saver… literally!

The two met on eHarmony and were instantly a perfect match. In fact, Lisa said they were marked as having compatibility that was extremely high. They had no idea how true that ended up being!

The couple soon fell in love and got married, but their lives weren’t without setbacks.

He had to find another perfect match

Dan had been diagnosed with a kidney condition in twenties, but it was supposed to take decades to interfere with his daily life.

All too quickly, Dan fell ill in his 30s, and as his kidneys began to fail, he was put on dialysis awaiting a for a transplant.

That’s when things got really wild…

Lisa got tested and was told it was highly unlikely that her kidney the result would be positive, as the odds are of 1 in 100,000. However, it turned out she was a perfect match.

“It’s like being next to a stranger on a train, matching them, and then also falling in love on top of it, you know,” said Lisa in an interview with ABC News, “there was like this sense that it was going to work.”

The kidney transplant was completed successfully at UCSF Medical Center August 22nd, and the happy and healthy couple now have a son.

They believe eHarmony might have been the best decision they have ever made.

They took a leap for love

Decisions that may seem small or insignificant, like joining a dating website, create connections that would last a lifetime.

Dan and Lisa had set out on a quest to find love, which eventually brought them together. She then made the choice to save the man she loves, resulting in a life-altering experience for the couple. By taking the steps towards love, they ended up with so much more.