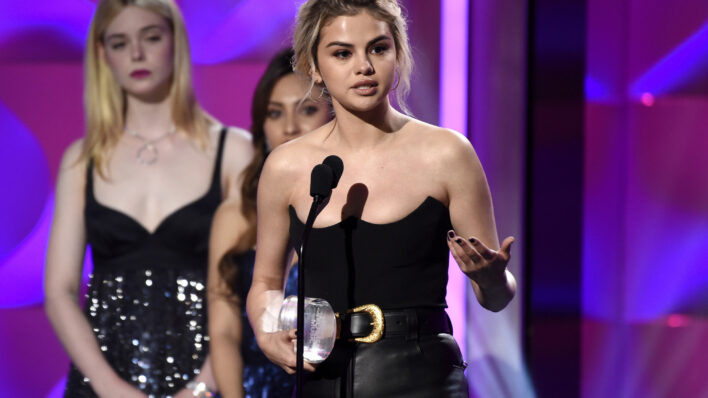 Selena Gomez Thanks Friend Who Saved Her Life In Emotional Speech

Honored as the “Woman of the Year” at this weekend’s 2017 Billboard Women in Music, Selena Gomez broke down into
By Eliza Theiss    December 5, 2017

Honored as the “Woman of the Year” at this weekend’s 2017 Billboard Women in Music, Selena Gomez broke down into tears as she stepped onstage.

Thanking her family, friends, coworkers and all the women that paved the way before her, the pop icon reserved the first part of her speech for fellow actress and close friend of many years, Francia Raisa, who presented her with the award – and earlier this year donated a kidney, further strengthening their bond.

To be honest, I think Francia should be getting this award, because she saved my life. – Selena Gomez

“I want people to know I respect the platform I have so deeply.”

For many, Selena Gomez seemed to have a perfect life – chart-topping hits, billions of on-demand streams, sold-out concert tours, and a flourishing acting career. But the pop icon had been battling lupus, an aggressive autoimmune disease, since 2013. Although she had previously opened up about the challenges of living with lupus, Gomez understandably kept the scale of the impact it was having on her life and health private.

In September the world of pop music was rocked by the news of Selena Gomez’s kidney transplant. Posting a joyful hospital picture on Instagram, the pop icon shared the news of the successful medical procedure that saved her life. But beyond the promise of better health, and the immense generosity of organ donation, Gomez’s story had an even more emotional side – the much-needed procedure was made possible by close friend Francia Raisa, Gomez’s organ donor.

It got us closer, but I also learned so much this year about myself. It was a very humbling experience. – Francia Raisa

Speaking before the star-studded event, Raisa revealed the emotional journey the procedure took her on. From needing help with the most basic tasks after the surgery, like getting dressed or showering, to the nerves and anxiousness of waiting for the results that determined she was a match, Raisa’s commitment to her friend and friendship never wavered. “When I found out I was a match for Selena, I didn’t think twice about it,” Raisa declared at the event, jumping at the opportunity to help her suffering friend out.

In fact, Francia committed to the procedure not even knowing how dire Gomez’s situation was – the pop superstar was two weeks away from kidney failure. With the both Gomez and Raisa on the mend and back in business, the world will be watching for more inspiring friendship stories from the incredible pair.