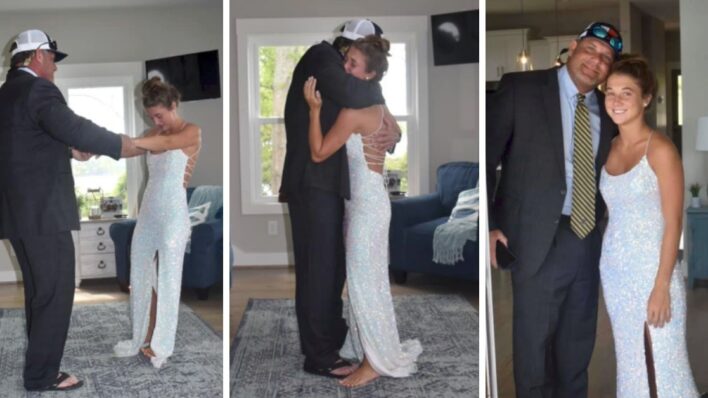 There is nothing a father would not do for his daughter. Robby Odgers has proven the saying by making sure his daughter gets the prom she wanted.
By Aly Walansky    April 27, 2020

There is nothing a father would not do for his daughter. Robby Odgers has proven the saying by making sure his daughter gets the prom she wanted.

As coronavirus has forced much of the world to shelter in place and isolate from all areas of their lives, rites of passage like graduation and the prom will be missed by many.

Losing out on the prom, which is often an event seniors look forward to since they started high school can be really rough on teenager. After all, it celebrates the end of a chapter and sets the beginning of a new one.

In coronavirus lockdown, these life achievements can seem to lose their value, especially in the face of much more urgent concerns.

But a high school senior from Alabama who was feeling pretty hopeless about her own prom received a major surprise from her father.

He surprised his daughter with a celebration

Marli Odgers’ story was recently posted to Facebook, showing her in a beautiful prom dress dancing with her father, Robby Odgers, to the song “Bless the Broken Road” by Rascal Flatts.

“She just thought it was canceled. My sweet dad made her get up and go to prom this morning. Memories we will cherish forever- even in the middle of the chaos and craziness.”

How did he pull it off? Well, Robby left Marli a note that read the following: “Today is prom, one dance with dad? Will you go with me?” on their home’s staircase.

He left the note on top of a garment bag that contained Marli’s dress.

Robby sensed his daughter’s disappointment at not being able to celebrate her senior prom.

I just began to think what we could do. She was very much looking forward to her senior prom, and I just started thinking what we could do to at least… make her think, well — maybe not prom — but a version of prom.

The surprise brought Marli to tears. “I was really emotional, and I’m not an emotional person. It’s something I’ll never forget,” Marli said.

Robby said it was actually extra memorable since it’s the first time he got to slow dance with his daughter.

“Typically, maybe besides maybe at a party or whatever, until your daughter gets married, you really haven’t danced like that,” he said.

“Obviously, that was not a wedding, but probably the closest thing to it in my perspective, to be able to hold your daughter close and dance with her, and have that special feel.”

A special moment during hard times

Both Marli and Robby hope that their special moment could help someone feel a little better as the world is facing a pandemic.

In the world that we’re living in, and all the negativity and all the sickness, and all of that stuff going on, if it cheered somebody up or made somebody happy, if it was just one person, to me it was worth it.

Marli and Robby reminded us that we can always find something good in a bad situation. While we deal with this pandemic, it’s important to make time to celebrate victories, whether big or small, and the people around us.