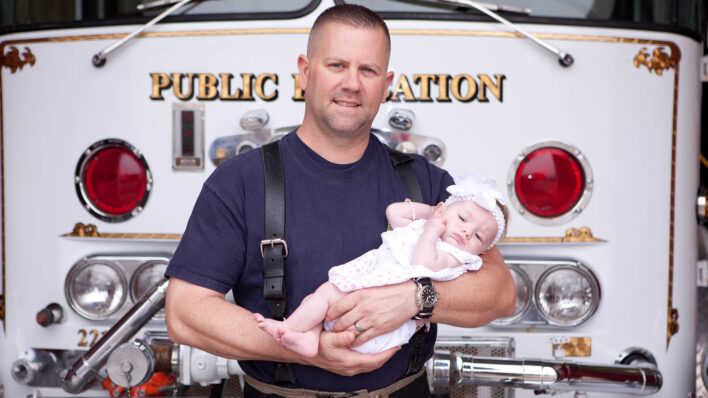 Firefighters save lives every day – it’s their job. But then they move on to the next job and rarely
By Aly Walansky    December 21, 2020

Firefighters save lives every day – it’s their job. But then they move on to the next job and rarely know what ends up happening to the people they rescue. Except in this case, where the firefighter rescued a baby and then decided to adopt her.

Marc Hadden is a member of the fire department in Myrtle Beach, South Carolina, and on Nov. 14, 2011, he had an unusual day at the office – rather than fighting a fire, he ended up delivering a baby for the very first time.

The baby’s birth mother had called 911 complaining of abdominal pain, and Hadden ended up at the scene.

“She struggled from the minute she was put in my hands,” said Marc in an interview with People. Marc had to give the baby emergency oxygen just seconds after she was born to help her breathe on her own.

“It was amazing to hear her cry.”

But soon after, at the hospital, the birth mother said she couldn’t care for her daughter – and Marc immediately wanted to be the one to step up to take care of her.

Welcoming Rebecca Grace into the family

Just two days later, that baby ended up coming home with him and his wife. They named her Rebecca Grace.

Marc and his wife Beth already had two sons and really wanted a third child, but had experienced some complications while trying to conceive. They were already on the road to adoption when they met baby Rebecca.

Beth said she knew it was meant to be as soon as Marc called her with the news of his day at work.

“I delivered a baby.”

“Can we keep her?” she even had replied. Beth had been half-kidding, but then Marc gave her the news.

“I think she might be going up for adoption.”

Beth visited the birth mom at the hospital the very next day.

“My heart just went out to this woman,” said Beth. “I brought her a little prayer book and asked if I could get anything for her.”

While the women were talking, a doctor came into the room and said they were ready to proceed with adoption, and then the birth mom turned to Beth, ‘I can’t give my baby to someone I’ve never met.’

That was the moment of opportunity. “I want you to adopt my baby,” the woman said, looking at Beth, and then the nurse brought the baby in and Beth got to hold her for the first time.

“She is what we prayed for,” says Beth. “It felt like winning the lottery.”

Now Gracie is a member of the family, and Beth and Marc have been honest with her about how she came into their lives. I’ve taken her to the back of the ambulance where she was born, so she knows!”

Sometimes the best things happen in the blink of an eye

Beth and Marc remain grateful and in awe.  “Sometimes the best things in life happen in the blink of an eye — and you can’t let them pass you by,” said Beth.