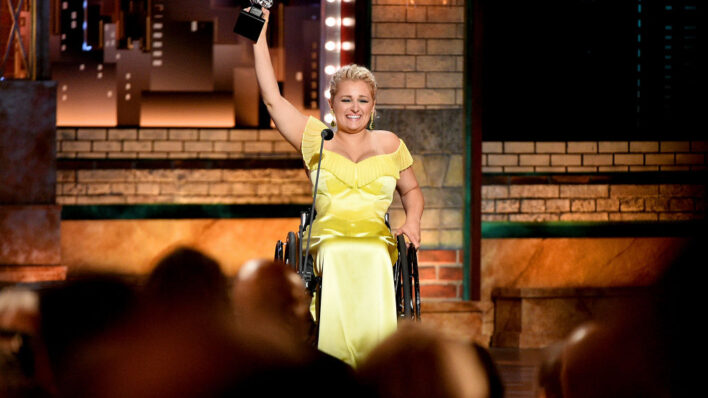 A Tony win, especially one for best actress, is a crowning achievement for any performer. For Ali Stroker, who stars
By Eliza Theiss    July 3, 2019

A Tony win, especially one for best actress, is a crowning achievement for any performer. For Ali Stroker, who stars as Annie Ado in Broadway’s Oklahoma! revival, it’s a doubly significant moment. Not only was she recognized as Best Featured Actress in a Musical, but Stroker’s early June win also marked a historic first: she’s was the first wheelchair user to win the coveted award.

In her acceptance speech, she dedicated the award to children with disabilities: “This award is for every kid who is watching tonight who has a disability, who has a limitation, who has a challenge, who has been waiting to see themselves represented in this arena. You are.”

Stroker grew up in Ridgewood, New Jersey with her parents and two siblings. Early on, Stroker was a driven child — at age 7 she saw her first Broadway musical and instantly decided to become an actress. Nothing would stand in her way, and by the time she was attending Ridgewood High School, she was starring in the school’s musicals.

She attended the acclaimed Millburn Summer Musical Theater Conservatory, and went on to become the first actress who uses a wheelchair to graduate from NYU’s prestigious Tisch Drama Department. Then came appearances on hit series Glee and its spin-off The Glee Project.

Then Stroker broke the ultimate barrier in 2015, making her Broadway debut as the first actress who uses a wheelchair. And then of course, came the Tony, and another barrier broken.

While Stroker’s win was widely celebrated for its impact on people with disabilities everywhere, it sharply brought into focus how little representation and accessibility there is on Broadway and the theater industry overall. Stroker was a big favorite for her category and yet neither Tony organizers, nor the venue itself thought of ensuring equal access for her.

There was no ramp to the stage

Showcasing the everyday struggles of people with mobility issues and the extra work and energy they need to expend in a world designed against their needs, Stroker had to come on stage to accept her award from backstage.

After the cast of Oklahoma! performed as part of the ceremonies, Stroker had remain to backstage, behind the curtain and wait to see if she won her category. Later on, when her cast won Best Revival of a Musical, Stroker, the musical’s star, she could not go on stage with her castmates to accept her second award.

As everyday people and other industry members with mobility challenges spoke up in support of her win and outrage for the Tony’s lack of accessibility, Stroker herself spoke up about the issue.

She understood the logistical challenges of providing equal access, but that in itself shouldn’t be the final thought on accessibility in the theater world.

“I think I had dream that maybe there could be a ramp built. It’s more than just a logistical thing – it’s saying that you are accepted here, in every part of you,” she told The New York Times.