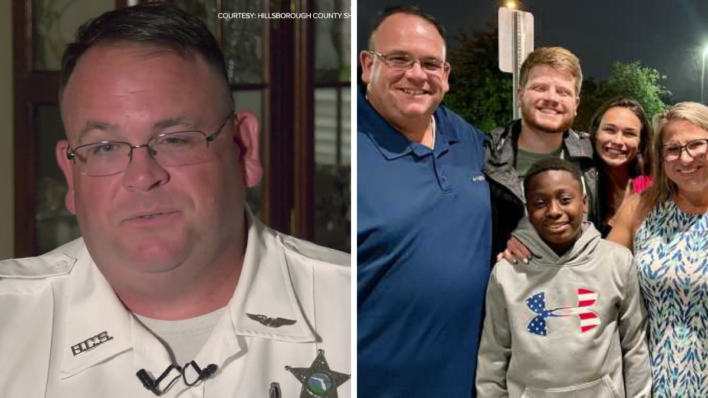 One special kid got a second chance at life and love when a big-hearted detective and his family rescued him
By Bryan Liquor    August 6, 2021

One special kid got a second chance at life and love when a big-hearted detective and his family rescued him from a real-life horror story.

Nothing could have prepared Hillsborough County Sheriff’s Office (HCSO) Detective Mike Blair when he was called to the Oneal household following a horrifying 9-1-1 call.

Presiding judge Michelle Sisco would later say at sentencing that “For the rest of my life, I’ll be haunted by what I saw.”

What she and Blair saw were the slain bodies of Kenyatta Barron and her disabled daughter, 9-year-old Ron’Niveya. The coldhearted killings were committed by patriarch Ronnie Oneal III.

Blair would learn that there was another family victim: 8-year-old Ronnie Oneal. He was alive, but his chances weren’t good.

“We were told there was a child being medevacked to Tampa General, but he was not expected to live,” Blair recalled to HCSO.

Miraculously, young Ronnie pulled through. When Blair visited him a few weeks later, both of their lives would be forever changed.

However, Blair told WFLA that it was one particular evening that transformed their bond.

“I called my wife and we were planning to go on a date night that night and I said, ‘Hey, instead of doing date night, do you mind if we watch a movie with this kid?'” Blair continued.

Danyel already knew that they had to do more for the young boy.

I had already known that I would want to take Ronnie home with us, starting that night.

So when their local church asked the Blairs if they knew someone who could take in Oneal, the couple was all in.

Even their five kids were on board.

“My kids had come to me… and said to me, ‘Dad, you just need to go with Mom on this; we need to start fostering,'” Blair told People.

For Oneal, his young life is very different, however he’s grateful to be part of a loving family.

“I have a different brother and sister, different mom and dad, different house, but it’s pretty cool to be with them,” he said in the video. “They are really nice people. They are the best moms and dads, and they really take care of me. There is no one else better than them.”

Despite what happened, Oneal keeps only warm memories of his late mother and sister.

“She was nice, she pushed me on the swings, she made me some good wings and food,” he said of his mother.

“My sister, she couldn’t talk but she could still move her head, so I learned sign language,” he added. “She was very nice.”

There’s literally no way to process what this young boy went – and is going through. He’s survived hell, and has the scars to prove it.

However, hell doesn’t stand a chance against the power of family. In the Blairs, he’s found a protective halo to give him the courage to fight on.

We should all be grateful for the family we have for giving us the power to get back up and shine.

The Blair family mantra – that young Ronnie repeats in times of stress – is one we should all adopt.