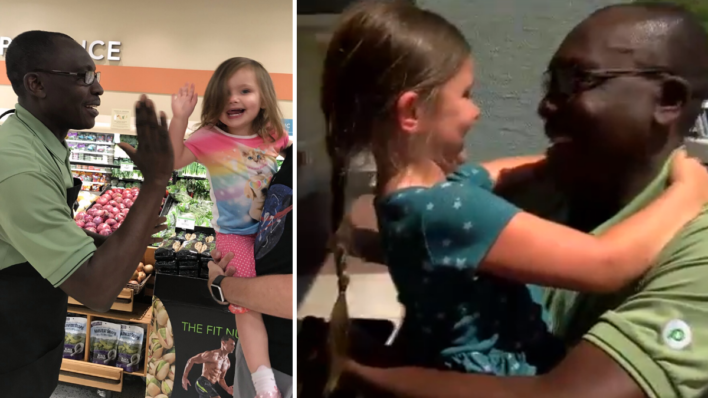 The unlikely friendship between a toddler and a grocer touched thousands of hearts.
By Sophie Babinski    May 17, 2022

The unlikely friendship between a toddler and a grocer touched thousands of hearts.

Some of the most beloved dynamic duos in our culture are made up of two very different souls who were drawn together against all odds to form an amazing bond. The Fox and the Hound, Woody and Buzz, or Marty and Doc Brown have all stood the test of time and topped our list of favorite friendships for decades.

While it may seem that Pairs like these only exist in the movies, one little girl in Florida proved unlikely bonds also exist off the big screen, even in grocery stores near you!

The Unlikely Relationship between a Publix Grocer and a Little Girl

Rachel Smith of Fort Myers, Florida, made a special ritual with her daughter, Fiona, of taking her on a grocery shopping trip every Saturday since Fiona was just a baby. Throughout the years, and because of their regular visits, Rachel and Fiona began to recognize many of the people who worked into the store. An employee named Gilnet quickly became one of Fiona’s favorite people.

When she was a baby, he tried to teach her to give a high five. He tried this a few Saturdays in a row and for a while she didn’t really get it; but when a “high five” finally clicked, she became enthralled! Every Saturday when she arrived at the grocery store, Fiona would immediately run through the aisles looking for her buddy, who she now affectionately called “high five.”

Gilnet happened to live in the same neighborhood as Rachel’s parents, and decided one year to go above and beyond for little Fiona and their friendship. For her third birthday in 2018, Gilnet, a little bit worried he was overstepping, decided to drop off a wrapped gift with the little girl’s grandparents.

It was wrapped up in a box, so we didn’t have a clue what it was until they brought it over to my house on her birthday. [Fiona] eagerly ripped it open and realized it was her very first bicycle. She loved it so much and wanted to say thanks to him by giving him some pictures of her riding it.

The gift turned out to be her very first bicycle! The family was overjoyed and went to the store to personally give Gilnet a thank you card and a big hug!

How Two Unlikely Friends Found Each Other after the Pandemic

Sadly, as with many things, the COVID-19 pandemic meant that Rachel and Fiona would have to stop their regular in-person visits to their special Publix store. During the time they were away, Gilnet got transferred to another store. When they restarted their regular visits, Rachel and Fiona were devastated to find that Gilnet was gone, and they sought to reconnect with him. Rachel asked around and was able to track down his new location, where she surprised him with Fiona.

The special relationship between Gilnet and Fiona inspired Rachel Smith to share the amazing story on TikTok and  to start a GoFundMe for Gilnet, whose kindness towards her daughter throughout all six years of her life has always inspired her. Her goal was to raise $5,000 for the Publix employee, saying: “I’d love to give something tangible back to him for the joy he’s given my daughter her whole life.”

The story went viral and Rachel surpassed her goal within three days. Rachel has also decided to create a charity called “Who’s Your High Five” to recognize people like Gilnet whose small acts of kindness and true friendship help make our world a better place.

inspire others
“Inspiring others to be the best that they can be is a great gift to give others.” – Rev. Charles Thomas Comella
Tags
Share
← Prev Post Next Post →