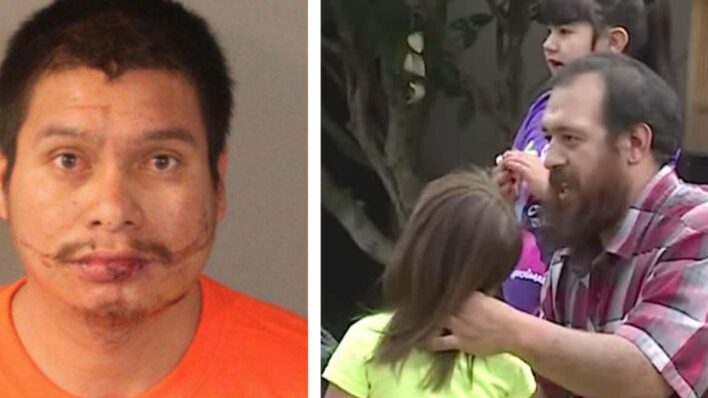 One father’s heroics brought his little girl home safe and served as a crucial reminder for all parents. For kids,
By Bryan Liquor    July 6, 2021

One father’s heroics brought his little girl home safe and served as a crucial reminder for all parents.

For kids, parks are a safe place where friendships are made and games are played.

That was the scene at the Regional Park in front of Freddie Cantrell’s home where his two daughters — 3-year old Aubrey and 6-year-old Nathalie — were playing, with their mother and stepdad present.

Things suddenly took a scary turn. It all took place in front of Nathalie, who recalled the chilling details to CBS Sacramento.

“The guy walked up and started dragging Aubrey and running with her and skipping with her.”

Dad dashes to the scene

“He tried to swing at me with handcuffs wrapped around his fingers and try to use them as brass knuckles, and that’s when I just took action and tried to knock him out,” Cantrell said.

Cantrell overpowered the man and held him until police arrived. 26-year-old Yonel Hernandez-Velasco was ultimately arrested for kidnapping and assault with a deadly weapon.

Cantrell’s actions served as a serious wakeup call for parents in the neighbourhood.

“You see the bad stuff on the news and hope it’s not going to happen to your kids, so you’ve got to just keep an eye out I guess,” said April McGuinness, a mother, and neighbour who lives nearby.

“It’s better than me having to get kidnapped because I come here alone,” he added.

Cantrell brushes off any praise by saying it’s just his daddy duty.

As the old cliché goes, kids grow up in the blink of an eye. However, this story shows that a split second is all it takes for a childhood to disappear.

While Cantrell deserves credit for acting quickly and courageously, his story is a reminder for all parents to keep a close eye on their precious kids. While they might complain in the moment that you’re embarrassing them, they’ll thank you in the end for keeping them safe.