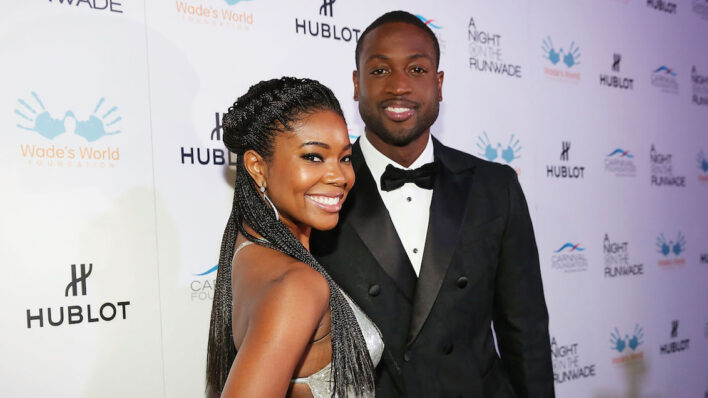 Both Gabrielle Union and Dwyane Wade had gone through terrible relationship problems before finding each other. But even their own marriage had been difficult to manage–this is how they worked through their many issues to become stronger together.
By Barbara Pavone    August 21, 2020

Both Gabrielle Union and Dwyane Wade had gone through terrible relationship problems before finding each other. But even their own marriage had been difficult to manage–this is how they worked through their many issues to become stronger together.

Gabrielle Union and Dwyane Wade have faced more challenges than most couples. Since first crossing paths in 2007, they’ve managed to work through a long list of controversies and disappointments and come out the other side full of love. Yes, there were times when breaking up would have been the easiest option (in fact, they did briefly call it quits in 2013), but some connections are simply worth the work. As Gabrielle once proclaimed, “This kind of love is a gift.”

Here’s what we can learn from Gabrielle Union and Dwyane Wade’s bumpy love story:

Gabrielle Union and Dwyane Wade met in February 2007 when they were hired to co-host a Super Bowl party, but their connection was far from instant. At the time, Wade was married to his high school sweetheart, Siohvaughn Funches, while Union had just gone through a “crash and burn” marriage with NFL player Chris Howard. They split in 2005 and, as Union later revealed, she “hit rock bottom. I had to lose everything,” she said of the difficult time during which she “literally found myself under my bed with my dog.”

Not only was the timing off, but as Union recalled, she and Wade seemed to be total opposites. “I stayed on one side of the room with my people. We like to party and he doesn’t drink at all,” Union said. “He was on the other side of the room holding bible study.”

Don’t believe in your preconceived notions

Following that initial encounter, Gabrielle Union pretty much wrote off Dwyane Wade. Then he came back into her life. In June 2007, Wade filed for divorced (just one month after Funches gave birth to their second child) and rumors began swirling that the NBA star had started dating Gabrielle. That’s when Dwyane reached out to the actress to apologize for all of the gossip and they reportedly struck up a friendship.

As Gabrielle admitted to Glamour in 2014, it was purely platonic:

When I met Dwyane, his ‘resumé’ looked like crap: athlete, going through a divorce, nine years younger than me. None of that screamed, ‘Let’s have a lasting relationship.’

All of that changed after “a heart-crushing breakup with yet another immature jerk” pushed her to reevaluate her ‘type.’ “I thought, ‘It can’t be any worse if I date a fetus,’” she continued. “Turned out he’d been on his own since he was 15. He had wisdom that comes with facing an insane amount of adversity. He’s sweet, funny, honest about his shortcomings,” she gushed.

When I put my preconceived notions to the side, I found someone cool.

Their relationship was put to the test from the get-go

Once Gabrielle pushed aside her preconceived notions and gave Dwyane a chance, the real test began. The couple started dating in 2009 and soon, Union was being labeled a homewrecker.

Dwyane eventually finalized his divorce in June 2010, which is when the courtroom drama evolved to include Union. The Bring It On star was dragged into the eye of the storm when Dwyane ex-wife sued her for “emotional distress,” claiming she had traumatized her kids, Zaire and Zaya, by having “sexual foreplay” with Dwyane in front of them.

The case was eventually dismissed, but not without considerable effort from Gabrielle. Speaking about the ordeal, she recalled, “We were submitting plenty of proof for the times she said I was in Miami. So, it was like, obviously you’re not telling the truth.”

As for why she didn’t respond to rumors that she was the reason behind Gabrielle’s divorce, Union eventually told Jet in 2012 that it was a conscious decision. “I think people mistook me taking the high road as an admission of guilt,” she noted. “Dwyane and I made a decision very early to not react to the negativity.”

Taking time apart can make your stronger together

Gabrielle Union and Dwyane Wade finally made their relationship public in February 2012, but told Essence they weren’t “rushing it” because they had learned from their past. “Both of us have been married before, and we understand that if we choose to marry again, we want it to be right,” Dwyane told the outlet.

We both took failing at marriage hard. The next time it’s gotta be forever.

Come January 2013, however, the pair decided to split up. Union blamed “distance and scheduling,” later telling Glamour, “I finished filming the show, then I flew to Vegas right away to start shooting Think Like a Man Too. I couldn’t take time off, and I missed some quality togetherness we desperately needed.”

But breaking up doesn’t have to mean the end. In fact, taking time apart can make your bond stronger. As Union explained, “When you’re debating whether to go backward or forward, you have to look at the original issue.” Which is exactly what she did during their split.

“Over the summer, I reassessed priorities. I’d always wanted an awesome career with back-to-back projects, but I realized I wasn’t willing to sacrifice my relationship for it,” she admitted, concluding, “If an issue’s a deal breaker, it’s a deal breaker. If your relationship isn’t something you’re willing to give up and you can compromise, do so.”

Watch this Goalcast video, for another inspiring relationship story:

What doesn’t break you makes you stronger

Following their reconciliation just a few months after their breakup, Union and Wade got engaged in December 2013 — and were faced with the biggest challenge of their relationship.

As Gabrielle would soon discover, Dwyane had fathered a child with Basketball Wives star Aja Metoyer during the split and Xavier was born in November 2013 — six weeks before his proposal.

Opening up about the ordeal, Dwyane confessed the “hardest thing I’ve ever had to do is man up and tell Gabrielle Union that I’ve had a child with somebody else. I couldn’t sleep. I wasn’t eating,” he recalled.

As he would soon discover, though, their bond was strong enough to weather any storm. “Me and Gab just went through something that you never want to go through and we still came out of it,” he noted in his ESPN documentary, D. Wade: Life Unexpected.

Nothing is perfect, but that’s life

Having worked through a long list of issues that would have easily pushed most couples to call it quits, Gabrielle and Dwyane said “I do” in August 2014. They then decided to grow their family, but over the next five years, Union would struggle with infertility, undergoing numerous IVF treatments and suffering around nine miscarriages.

“There was a lot of pain, and a lot of disappointment,” she told Parents, confessing that she “felt like a complete loser and failure.” Ultimately, she and Wade decided to use a surrogate and welcomed daughter Kaavia in November 2018. “I felt such relief,” Union told the outlet. “To hear her breathing and crying was a dream.”

Not that surrogacy was an easy decision. As Union told Today, it was something she struggled with… until she had her aha moment. “I’m so glad I got over myself and my fear of what people would think of me if I did not carry my own child,” she said.

It’s OK to bring your child into the world in a way that is not through your body […] Every route to parenthood is perfect, worthwhile and amazing.

Not all families have to look the same

These days, Gabrielle Union and Dwyane Wade couldn’t be happier. They’ve found their footing and, as she wrote in her 2020 children’s book, Welcome to the Party, not all families have to look the same. Which is exactly what makes them special. “This is my love letter to every non-traditional family, blended families, that no matter how you became a new family, it is beautiful and real,” she said of her inspiration.

Despite all of the hardships — or perhaps because of them — the superstar couple doesn’t sweat the small stuff (“He lets me off the hook, and I do the same,” she told Glamour) and prioritizes fun. “A lot of times, we become grown-ups and we feel like we have to act ‘grown,’ and that part of acting ‘grown’ is to somehow eliminate fun,” Union told Refinery29.

We should always keep a little bit of fun and immaturity as a part of our life, and certainly as part of our sex life.

At the end of the day, it’s important to remember that no two relationships are the same — just like no two families are the same. As Gabrielle told Glamour, “You can’t go by what your friends are doing or your family is influencing you to do.”

Rather, you have to listen to your gut and be open to taking a leap of faith. By shutting out negativity and not allowing the drama to get under her skin, Union was able to look inside herself and discover what would make her happy. And once she knew that was a family with Wade, she didn’t let anything get in their way.