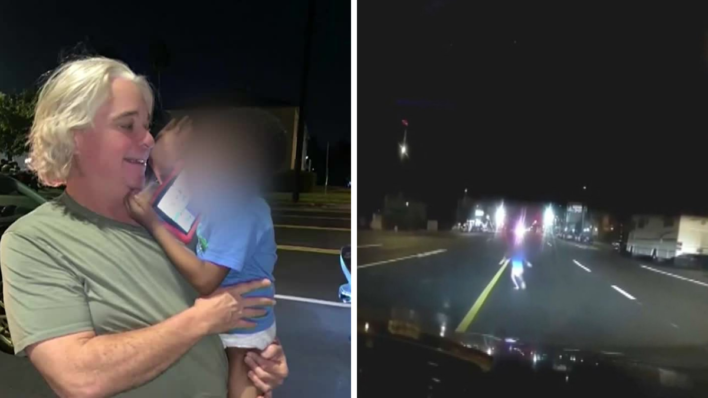 Toddler Walks Into Traffic, Food Delivery Worker Saves His Life And Delivers Lesson To All Parents

One brave food-delivering father of four risked it all to save a child running into dire danger. Baby in danger
By Bryan Liquor    September 16, 2021

One brave food-delivering father of four risked it all to save a child running into dire danger.

It’s every parent’s worst nightmare: Their child running across a wide busy street, with traffic whizzing by in both directions.

That was the danger one two-year-old child was in on one California night in Van Nuys. The only difference here: His parents were nowhere in sight.

He was in the right place, right time

Meanwhile, delivery driver Gerson Tavares happened to be completing his last food delivery when he drove by.

He spotted the tot running across lanes — in just a shirt and diaper — on Burbank Boulevard. The child was headed towards oncoming traffic, which included a pickup truck. The boy was distracted by a game tablet he was holding and wasn’t looking.

That’s when Tavares, himself a father of four, swung into action.

He immediately stopped his car in traffic and ran after the boy, waving his arms to warn oncoming drivers. When the coast was clear, he scooped up the child and brought him to safety.

Tavares got emotional when recounting that moment to Inside Edition.

I got the boy in my arms. Thank you, God.

Outrage at the parents

It’s not clear how the boy ended up in the middle of the street, and it left video commenters fuming.

“As a parent, we’ve all had those moments where we weren’t at our best. But I’m not sure how you can explain this. Middle of the night? Kid running in the middle of the highway in a diaper? Hard to explain, but I’d love to hear the parent’s excuse,” said one.

Another was less sympathetic.

“I understand that as a parent it’s easy for a kid to wander off in a blink of an eye. But this seems more than a dangerous mistake, this appears beyond irresponsible.”

Los Angeles Police have located the boy’s guardians and said that the Department of Child and Family Services will look into the incident.

Heroism is an instinct

In a joint interview wit his father, Tavares’ son son Igor said that he couldn’t be prouder of his pops.

“You were the right guy at the right place, doing the right thing,” he told his father.

He added that he wouldn’t expect anything less from him.

And for me, what makes me more proud of him was how quick he acted, with like fast reaction. Just the way I expect my dad to be. You know. My hero. I love this guy.

Meanwhile, his dad’s quick to pass the credit up.

Call it divine intervention. Call it fortuitous fortune. Call it plain ol’ luck. Whatever it was, it took one amazing individual who reacted on a moment’s notice, putting his safety aside to make sure one kid has a future.