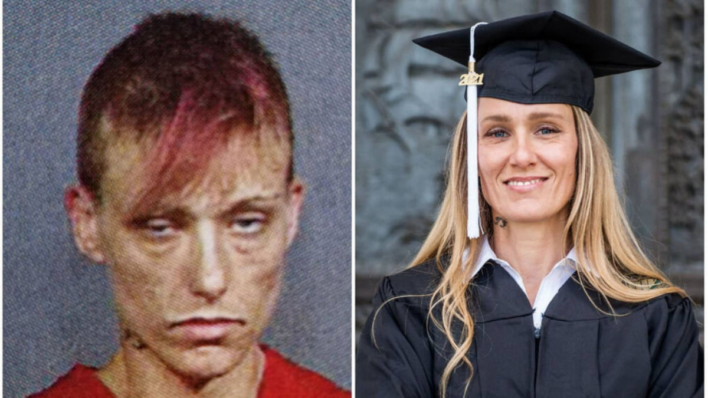 8 Years Ago, She Was An Addict On The Verge Of Death – Today, She Proved Everyone Wrong

A before and after photo has gone viral after a woman’s incredible recovery and transformation from drug addict to graduate.
By Joel Balsam    June 17, 2021

A before and after photo has gone viral after a woman’s incredible recovery and transformation from drug addict to graduate.

Providing hope for all

In 2005, Ginny Burton hit rock bottom. She was strung out on cocaine and heroin when she was arrested by police and photographed in a haunting mugshot.

Today, Burton doesn’t look at that photo with shame, but rather as a signal to inspire others.

“How about that for motivation? I honestly thought I’d die on a park bench with a needle in my arm or by gunshot to the head. I would’ve never in a million years thought my life would look the way it does today,” Burton wrote in a now-viral Facebook post.

“Stop selling yourself short. You don’t know what tomorrow might bring so you might consider starting today.”

She had a life of trauma

At the tender age of 12, Burton said she got hooked on methamphetamine and cocaine. By 14, she was smoking crack.

“By the time I was 15 years old, I was a full-blown drug addict,” she told WBNS.

At 16, Burton was raped by a man who bought drugs from her mother and at 17 she tried to commit suicide and got pregnant, but the husband was shot and killed, Komo News reports. By the time she was 23, she was shooting heroin and had all but given up on life.

“I’ll be really honest with you I didn’t care whether I was killed, whether I successfully committed suicide or whether I went to prison,” Burton said. “Any one of those options was just fine for me because I just wanted to stop and I couldn’t stop on my own.”

But then eight and a half years ago she got arrested and a switch flicked inside. She went through a treatment program at the Regional Justice Center and got clean. She’s stayed that way ever since.

“If you would have told me that my life would look like it does today eight and a half years ago, I would have called you a liar,” Burton told WBNS.

“It’s the longest I have ever been clean in my entire life.”

Burton just graduated with a bachelor’s degree in political science and has been accepted to the Evans School of Public Policy in Seattle. Her dream is to reform the prison system.

“My story isn’t an accident,” she told Speak Out Seattle. “I think it will be used for everybody else. Maybe I can be some kind of Pied Piper, to help people recover their own lives. That’s what I care about. There are some days that I wish I could just slip away here, with a garden, and open up a little cafe. But in reality, I know it’s my job to continue to create hope.”

The power of perseverance

Burton’s traumatic childhood have her little opportunity for a cleaner, safer path — and it almost led to her demise. But she persevered and her dramatic recovery is a signal for all that while it isn’t easy, we all have the power to change our toxic behaviors if we want to badly enough.