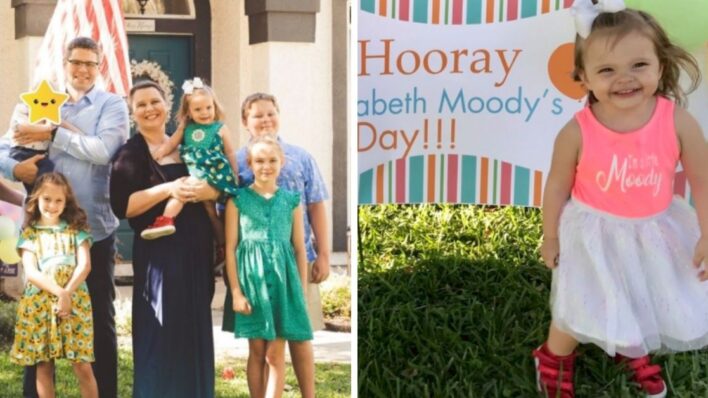 Cayela and Evan Moody became foster parents back in 2018. When they met their first foster child, 2-year-old Isla, they knew she was meant to be theirs.
By Aly Walansky    May 25, 2020

Cayela and Evan Moody became foster parents back in 2018. When they met their first foster child, 2-year-old Isla, they knew she was meant to be theirs.

In the age of social distancing, everything from weddings to graduations is being done via Zoom. It’s a way of celebrating important events even when we can’t celebrate them together – and for Evan and Cayela Moody, who had been fostering 2-year-old Isla, there was nothing more worth celebrating than her adoption becoming official!

Isla is two years old and has lived with the Moodys most of her life. But the process of a formal adoption was taking a while. So when it finally became official happened, the celebration had to be done over a Zoom call, in full respect of social distancing rules. But there was no question that a party was in order.

She was meant to be a part of their family

Isla had been living with the Moodys’ since she was a tiny baby, just after the parents of four biological children received their foster care license in 2018. At the time, the Moodys received a call about “a four-pound, eight-ounce premature baby in need of a home,” which they immediately answered.

Cayela drove to the hospital, 90 minutes away while Evan got started on building a crib for baby Isla. When they first met Isla, they immediately knew she was meant to be a part of their family.

We’d had Isla for 48 hours and somebody asked if she needed us for adoption, would we want to? I brought it up to Evan and he said, ‘You won’t need to ask me again. If she needs us for adoption, I’m all in.’ I fell in love with Isla the first time I saw her.

They spent the next two years dealing with a painful adoption process, with many ups and downs. At last, in February 2020, they got a date scheduled, but the pandemic hit, and everything stalled.

They basically stopped all operations for a while at least. We knew in February that it was pretty much a certainty that she was going to be with us forever, but the actual adoption ceremony itself and decree was on hold indefinitely at that point.

However, courts eventually transitioned to online procedures and with more than two dozen families watching during a Zoom call, the Moodys finally officially became Isla’s parents.

But the community made sure Isla got an official party

And then, celebrations started for the “articulate, beautiful, and easygoing” two-year-old’s adoption. That party ended up being a parade! A socially-distanced one, of course, but a parade of a dozen decorated cars drove past the family’s home; and everyone in the neighborhood came out to celebrate, according to Good Morning America.

“Everybody wanted to be part of Isla’s adoption, but I thought I can’t do this right now, we’ll throw a party later,” revealed Cayela. “A friend asked if it would be okay to throw a parade and I said that’d be fine. I wanted people who supported us and Isla to be able to celebrate because they’ve been part of this, too.”

A day Isla will be able to remember

By marking Isla’s adoption with a celebration, despite the pandemic, her parents and the community ensured that she’ll have memories of a very special time in her life. After all, it is not every day that a foster child finds a new family during a pandemic.

Her newly-adoptive father said, “Whether or not she had understanding at all, or to what degree she understood what was going on, we’ll be able to look back at that day and say you were really loved by a lot of people. And yeah, you were adopted during a pandemic and that was super weird, but that being said, you didn’t just have a party, you had a parade.”

The Moodys are setting an incredible example

Cayela and Evan Moody are adamant about the power of community. “We had a group of people around us who loved us and encouraged us, people who had been through this forever to help guide us… It’s kind of cliché, but it really does take a village to make it work,” they said.

They all came together to make sure Isla had a memorable, and commemorated adoption ceremony, despite the limitations caused by the pandemic.

The Moodys’ story attests to the power we have to make a change in someone else’s life.