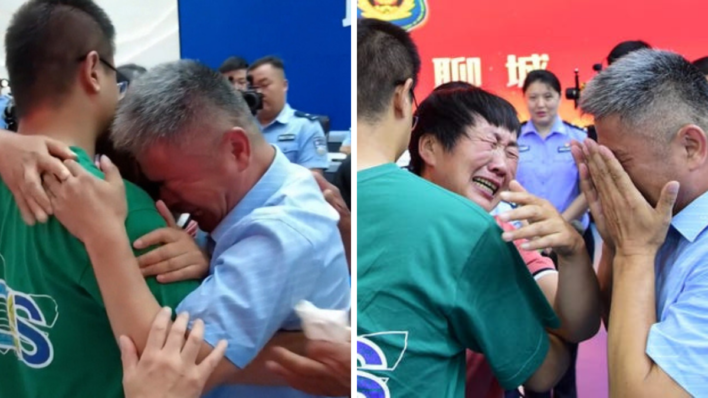 More than two decades of searching aand Chinese parents Guo Gangtang and Zhang Wenge came up short — until one
By Joel Balsam    July 15, 2021

More than two decades of searching aand Chinese parents Guo Gangtang and Zhang Wenge came up short — until one day, a DNA test was a match and they were finally reunited with their long-lost son.

Guo Xinzhen was twp years old and playing outside the family’s front gate in Beijing when a man and woman kidnapped him. Parents Guo Gangtang and Zhang Wenge were devastated. How couldn’t they be? Their son was another victim of a large string of abductions that occurred during China’s decades-long one-child policy.

According to AP, boys like Guo Xinzhen, too young to know their names or hometowns, were sold to couples who wanted someone to look after them in old age. Girls were sold to be a bride to an only child or as a servant.

In a 2015 TV interview, the boy’s mother showcased her devastation: “What use is it for me to live?” she reportedly said. “It was me who lost the child.”

But the parents wouldn’t give up hope. The boy’s father, Guo Gangtang crisscrossed China on his motorcycle, driving through 30 of its 34 provinces. In the process, he reportedly wore out 10 motorcycles and said he once nearly fell off a cliff when he was blown off his bike in a rainstorm.

To fund the search, Guo operated a shop in Beijing that sells artwork. He also received financial help from relatives including his father, who kept working into his 70s.

Throughout it all, Guo carried a photo of his son as well as details like that he had a scar on his left little toe.

Guo’s journey was so riveting that it was turned into a 2015 movie called “Lost and Love,” starring Hong Kong actor Andy Lau. The film was marketed with the tagline: “Only when I am on the road do I feel like a father.”

In 2012, Guo started a website to help find kidnapped children as well as a charity in 2014. While he wasn’t able to locate his son at that point, he managed to locate dozens of others lost children.

“Thank you for participating in anti-trafficking activities for 24 years and helping more than 100 children return home,” the police ministry reportedly said on its social media account.

Finally, this June, Guo Xinzhen was found. Police experts found him a database after matching his toddler photo with what they thought he’d look as an adult. A DNA blood test confirmed that he was in fact the boy his parents had been looking for for 24 years, and they embraced in an emotional reunion as seen in a video recorded by police.

It turned out that the boy was taken northwest to Henan province by two suspects, Tang and Hu, who confessed to the abduction. It’s unclear if Guo Xinzhen knew he was abducted or not.

“He is a great father,” the long-lost boy — now a man — was reportedly quoted as saying to reporters about his father. “I am proud of him.”

It would have been understandable for these parents to stop searching. Finding their son in a country of over a billion people goes beyond the saying “finding a needle in a haystack.” Yet they didn’t lose hope. Rubber was burned, technology advanced and they finally found their son — helping to find over 100 other children in the process.

This story isn’t just an uplifting one, it demonstrates the importance of perseverance and maintaining hope when all appears to be lost.