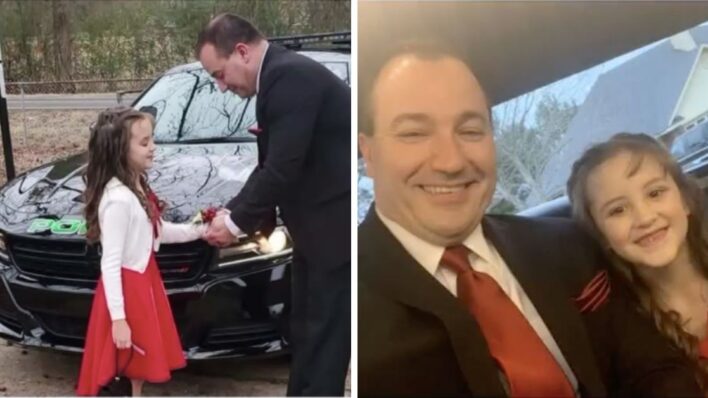 When Avey Cox lost her father, she was sad that she had never been able to go to her school’s father-daughter dance. That’s when this police officer stepped in and made sure she would have a date.
By Aly Walansky    March 12, 2020

When Avey Cox lost her father, she was sad that she had never been able to go to her school’s father-daughter dance. That’s when this police officer stepped in and made sure she would have a date.

The father-daughter dance was one of the biggest nights of the year at an Arksans school, but one 8-year-old girl was dreading it – because she had no date. That’s, until, someone special stepped in.

I was excited because I never went and I had been wanting to go.

Her father passed away

Avey’s father had died in January 2020, a tragic loss to suffer for any 8-year old child. The prospect of a father-daughter dance would obviously be a saddening reminder of her father’s death. Avey thought she would never be able to attend the dance.

‘I’ve been wanting to go for a long time, but my dad couldn’t take me.’

That’s when Officer Nick Harvey decided to step in. He volunteered to ask a child in need of a date. And he actually found himself nervous as to how she would respond.

“I did not want to be rejected by a second-grader,” Harvey told CBS News.

She was sitting at the lunch table and I walked up and said, ‘Hey, did you talk to your mom?’ And she said, ‘Yeah.’ And I’m like, ‘Would you like to be my date for the daddy-daughter dance,’ and so she’s like ‘yes’ and I was ‘phew.’

Officer Harvey didn’t do anything by halves

The night of the day, he arrived in his police cruiser. They made sure that their outfits coordinated and the two even posed for adorable photos. Then, they got into a limo that another officer had hired for them for the dance.

To Avey, it meant the whole world.

It meant a lot because I got to go and see all my friends there and then I got to go with them and have a lot of fun.

On the other hand, the experience for Harvey definitely took him out of his comfort zone. “I embarrassed myself a little bit…I can’t dance at all,” he confessed. Nonetheless, he plans on taking Avey to the father-daughter dance every year from now on.

What the experience meant to him

While Avey got to live the father-daughter dance for the first time in her life, Officer Harvey learned something, too.

Don’t take anything for granted. Enjoy your kids. Appreciate their childhood because they won’t be little for very long.

The officer’s sweet gesture has already had a sweet and totally unexpected impact — one he didn’t even begin to expect: Avey said she wants to become a police officer.

This just shows how one sweet and generous act can inspire another.