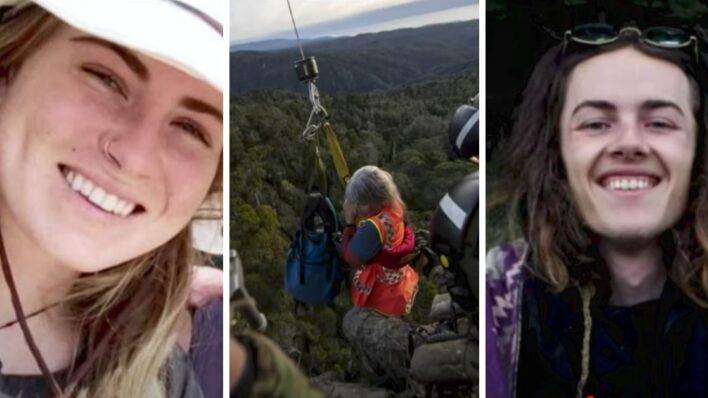 Jessica O’Connor and Dion Reynolds went on a 5-day hike in the Kahurangi national park but they ended up being lost for 19 days.
By Kawter    May 27, 2020

Jessica O’Connor and Dion Reynolds went on a 5-day hike in the Kahurangi national park but they ended up being lost for 19 days.

Jessica O’Connor, a kayak guide, and Dion Reynolds, a chef, are experienced hikers but even they found themselves in a life-threatening situation when a wall of fog caused them to lose their way in Kahurangi national park, in New Zealand.

Yet, their story shows that they know one or two things about survival.

They spent 18 days in the wilderness

Both 23, Jessica and Dion started their hiking journey on May 9th. Little did they know that what should have been a 5-day trip would end up lasting 18 days.

But when the fog caught the young friends, they were sidetracked in their adventure, causing them to get lost in the forest. Not only that, but they were also both injured in a fall and had run out of food. Jessica had hurt her back while Dion had strained his ankle.

Their story could have turned morbid, were it not for the tenacity of these two heroes.

A search party was gathered

Since the Kahurangi national park is the second largest one in New Zealnd–more than 450,000 hectares–covering an area of and the area was heavily forested and rugged, the search was a difficult one to say the least. Some areas in the park don’t even have trails.

Another hiker, Heather Simpson, told the news organization Stuff that the hikers had stopped at her campsite as they set out before continuing alongside a river.

But the two were lucky, as Heather Simpson had seen them at her campsite a little before they were reported missing.

They had seemed in good spirits and excited to go on an adventure together. They were young, fit and experienced in the wilderness.

Heather Simpson in The Guardian

The two had told her that they had enough food to last several days and they planned to ration it so it would last for as long as possible.

What saved Dion and Jessica was the decision to stay in place. They found water, lit a fire and stayed put in a small clearing in the woods that measure just 3 meters by 3 meters. The smoke from the fire saved their life, as it helped the search team to spot their location.

“They did the right thing,” Sergeant Malcolm York. “They stayed put and they made themselves visible.”

The pair were in good spirits but “had been without food for some time,” he said. On top of the injuries and the shortage of food, they survived the heavy rain and low temperatures too.

“I never had doubts about that because she knows what she’s doing,” she told TVNZ.

They left the emotions for after their rescue

Upon their rescue, Simone reported that Jessica’s relief was immense.

She was very emotional. I think she was in tears and couldn’t talk much…we will talk more once we see her.

Dion and Jessica’s survival story also prove that making level-headed decisions, even in the most panic-inducing situations can pay off. Instead of wandering off and tiring themselves, they spared their energy and did what was the best thing for their survival.

While few of us will ever find ourselves in a situation like theirs, we can certainly apply that learning in our day-to-day lives. From decision making to reacting to events, it’s always good to try being level headed, when possible.