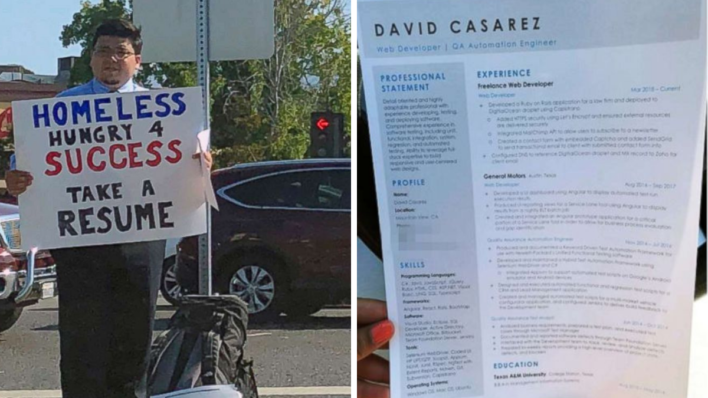 California nightmare Life hit David Casarez hard. He moved to California to pursue his dream as a tech entrepreneur. His
By Bryan Liquor    August 16, 2021

He moved to California to pursue his dream as a tech entrepreneur. His dream was to create an app called ‘Mesa,’ which helps mom-and-pop food businesses grow. “I want to do something that will put my name out there, make a mark on society,” he told CBSSanFranciscoReports.

However, some bad breaks, missed vehicle payments and massive student debt had him living on the streets. He told CBS news that it was a frightening experience.

“Living on a park bench is not the best feeling, you never know who or what is around you. I became restless just thinking about my safety”

Yet at his lowest point, instead of quitting, Casarez instead rolled up his sleeves and went to work.

When makeup artist Jasmine Scofield drove along a Silicon Valley street corner one morning, she had to double-take.

There stood a man, wearing a dress shirt and tie, engaging oncoming drivers. Unlike most, he wasn’t looking for a hand-out but instead handing something out.

Lo and behold, David Casarez was holding a sign that read “Hungry 4 Success – Take A Resume”.

“I thought to myself that if I could just get one person to notice me and give me a chance at a job opportunity that I would still have hope,” he told CBS News.

“I’ve been pretty close to his situation before. I really understand how difficult it is to find work in Silicon Valley. It hit really close to home for me…. I was determined to help him”

And so, when the light turned red, she seized the opportunity.

“I grabbed a resume and asked him what he did,” she says. He said he was an experienced web developer and, like a lot of people in Silicon Valley, was looking for work in the tech industry.”

“I yelled out, ‘Do I have your permission to post this on Facebook and Twitter?’ And he said yes,” she says. “That was the last time I saw him.”

The response was beyond anything she or Casarez could have imagined.

“I spent 20 to 30 seconds writing the tweet and Facebook post and by the end of the night, it hit almost 10,000 shares. I called him and warned him, and I said, ‘Hey, I’m the girl who took your resume and it’s going viral,'” Scofield says.

For Casarez, messages from potential employers and good samaritans have been rolling in.

“I have received [job] offers from all over,” Casarez told CBS News, “I have a few interviews I’m working on getting through right now. Overall, it’s been a surreal moment for me.”

As well, Austen Allred, the CEO of Lambda School, a business that teaches coding, sent Casarez an Airbnb gift certificate to help him get off the streets.

Casarez says that through it all, his mindset is what’s made the difference.

Yet like a plant, that attitude needed water from someone like Jasmine Scofield. Someone who knows how close to the margins life can take us, someone who knows the value of reaching out to help.

When we all recognize our role in keeping anyone in our community from losing their step, we all get stronger. Or, like in the case of Casarez, unstoppable.

“If you put it in your mind that you can do something, you will do it. Don’t let anything stop you”