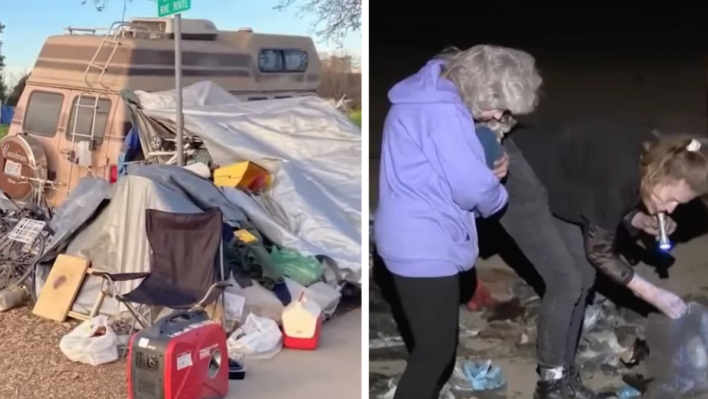 The two good samaritans didn’t even accept a reward
By Sophie Babinski    December 27, 2022

The two good samaritans didn’t even accept a reward

People tend to think the worst of the homeless population. Even though we may understand their motivation and their desperation, we assume that if a homeless person were to come across a huge sum of cash it would be lost for good. Many people with uncertain housing need money to buy food, warm clothes, or to spring for a roof over their heads for a few nights. However, when two homeless women recently found thousands of dollars in cash, they immediately decided to return it to its rightful owner.

A sudden fire almost takes everything

A San Jose man named George and his two dogs lived in a van within an encampment. There, he was surrounded by friends who were also technically homeless. Nevertheless, the community they formed had strong bonds– so when tragedy struck, George wasn’t alone. On the night before Thanksgiving, George’s van suddenly became engulfed in flames while all of his belongings, including his dogs, were inside. People who lived at the encampment immediately sprung into action and worked diligently to put out the fire. They were able to rescue the two dogs, but George’s belongings seemed to be lost.

RELATED: Starbucks Barista Asks a Homeless Man Eating His Meal to Leave – But a Stranger Didn’t Allow This to Happen

George was grateful to his friends for saving his beloved dogs, but he was devastated about the loss of his belongings. He told people that he had been saving cash to go and visit his family– something he hadn’t done in years. Now, his chance to see them again was lost. Unbeknownst to him, two friends of his would turn his luck around. Gretchen Pace and Kimberly Williams, two homeless women who lived at the encampment with George, decided to hunt through the rubble and see if any of George’s money could be recovered.

They searched tirelessly for hours, looking under all of the rubble, unfolding bits of cloth and opening containers to make sure they truly looked everywhere. Then, in a stroke of luck, Kimberly found cash in a metal tin, and Gretchen found some underneath a blanket. Some of the cash was damaged, but the serial numbers were still intact so it was usable.  Even better, it was enough for George to visit his family after all!

George couldn’t believe his luck and offered both Kimberly and Gretchen a share of the money as a repayment for their kind actions. They declined, telling him that they hadn’t seen their own families in many years, and just wanted him to be able to see his family.

He pushed back, insisting that he at least buy them a meal– the group settled on coffee, a donut, and a pack of cigarettes. Local news covered the story and hailed the two women as heroes– something they don’t agree with.

Both women say that they aren’t heroes, they are just good people who want the best for their friend. They hope that others who see their story would do the same for their own friends. It is easy to judge people by how they look or how they live, but we must not forget that kind, selfless, and heroic people are everywhere.

RELATED: Single Mother of Nine Goes From Homeless to CEO of a Mega Successful Construction Company