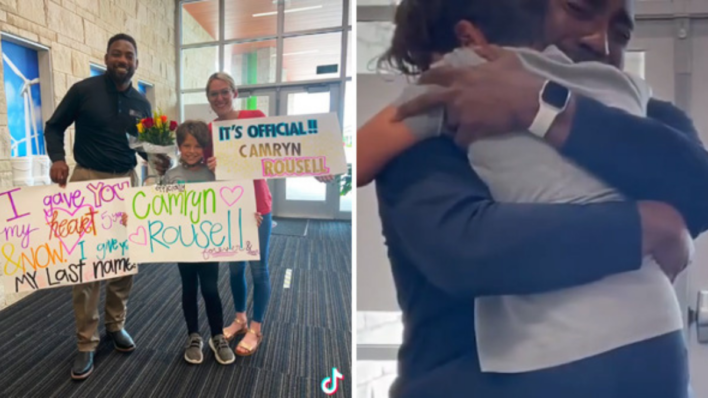 Devoted Husband Surprises Stepdaughter By Proving He Is Here To Stay

The title of stepdad wasn’t good enough for little Camryn. She wanted her mom’s husband’s last name. He one big
By Joel Balsam    June 28, 2021

He one big wish

Still, the whole family meshed and became one big unit.

However, having Mike as a stepdad wasn’t enough for Sarah’s daughter Camryn. She wanted Mike’s last name.

Stepdad surprises her at school

“I gave you my heart five years ago, and now I give you my last name.”

Sarah then pops out and shows a sign that says: “It’s official! Camryn Rousell.”

She got her wish

With her mouth agape and about to cry, Camryn speedwalks towards Mike who picks her up for a giant hug.

Then Mike starts crying, and as does Sarah when she gets her chance to pick up Camryn.

“Our adoption, for me, was me fulfilling that promise to Camryn that I was always going to love her…and just to let her know I wasn’t here by accident,” Mike told ABC.

“He has always been that type of person to always be there for me and encouraged me,” Camryn said. “He has been there for five years, but it’s felt like he’s been there my whole life.”

When a partner gets married to someone that’s not your biological parent, things can get dicey. Other times, it’s meant to be.

In this situation, it looks like the Rousells couldn’t be happier, especially Camryn, and if a big happy family isn’t uplifting I don’t know what is.