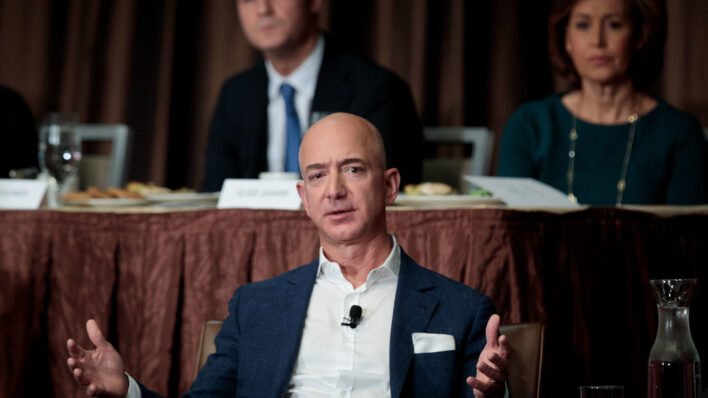 Jeff Bezos Commits $2 Billion to Help Homeless and Launch Preschools, Surprises Us With His Incredible Generosity

Jeff Bezos is the richest man in the world, with a net worth estimated at about $150 billion. With that
By Kaitlyn McInnis    September 13, 2018

Jeff Bezos is the richest man in the world, with a net worth estimated at about $150 billion. With that

Jeff Bezos is the richest man in the world, with a net worth estimated at about $150 billion.

With that kind of money, one could pretty much do anything they want — from stocking up a garage full of Lamborghinis to changing the lives of those in need.

Bezos, however, has often been criticized for not doing the latter to the same extent as fellow tech billionaires like Mark Zuckerberg, Bill Gates or Warren Buffet.

Sen. Bernie Sanders is no stranger to pointing out the fact that Bezos could be doing more with his wealth.

“Thousands of Amazon workers have to rely on food stamps, Medicaid and public housing to survive. That is what a rigged economy looks like,” Sanders tweeted.

However, it seems as though Bezos has had a change or heart, to the tune of $2 billion. On Thursday, Bezos wrote that he would be creating a “Day 1 Family Fund” that would “issue annual leadership awards to organizations and civic groups doing compassionate, needle-moving work to provide shelter and hunger support to address the immediate needs of young families.”

He’ll also work on an “Day 1 Academies Fund” which would operate as “a network of high-quality, full-scholarship, Montessori-inspired preschools in underserved communities.”

The vision statement, he explains, comes from the inspiring Mary’s Place in Seattle: no child sleeps outside.

Last year, Bezos had asked twitter to submit ideas for how he should use his fortune to help. He wrote that he wanted to help “people in the here and now — short term — at the intersection of urgent need and lasting impact.”

“Where is the good in the world, and how can we spread it? Where are the opportunities to make things better? These are exciting questions.” he wrote.

He ends Thursday’s tweet by thanking everyone who sent him suggestions and for the “inspiring examples of innovation” he sees everyday.

“It fills me with gratitude and optimism to be part of a species so bent on self-improvement.”

It sounds like Bezos really has had a change of heart. Earlier this week, he made an elusive appearance on Instagram, where he posted a photo of himself sporting pajamas at an Amazon board meeting.

Why am I wearing pajamas to an Amazon board meeting? September is Childhood Cancer Awareness month and each year Amazon partners with @ACCOrg to raise awareness of childhood cancer – second leading cause of death for kids in the U.S. between ages 4 and 14. Today, Amazonians across the globe show their support by wearing their pajamas to work – also known as #PJammin. Another way we’re raising awareness is through our special #GoGold boxes – you may receive one during September. Never have I been more comfortable at an Amazon board meeting!

Who knew Bezos had such a soft side?