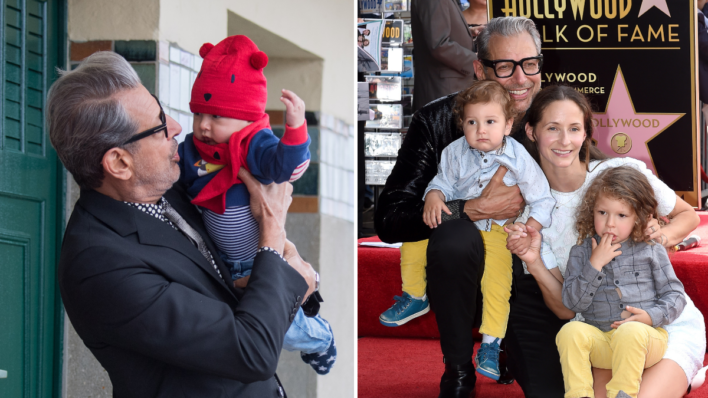 Is it ever too late to decide to step into fatherhood? For Jurassic Park actor Jeff Goldblum, the answer is no.

Is it ever too late to decide to step into fatherhood? For Jurassic Park actor Jeff Goldblum, the answer is no.

What is it about Jeff Goldblum that gets the internet hot and bothered time and again?

The actor, who is 68, has inexplicably become one of the leading sex symbols of our times. Could it be his tantalizing stage presence in 90s blockbuster films like Jurassic Park and Independence Day? Or is it his slightly feminine idiosyncrasies that shatter age-old assumptions about masculinity? Perhaps it’s the phenomenal dress sense that exudes confidence, color, and playfulness? It’s hard to pin down a deciding factor, but one thing’s for sure: he manages to excide audiences across the world in one way or the other.

Yet, behind the quirky sex appeal lies an earnest, family-oriented man who’s just grateful to be in this wild journey. He’s been married a few times and has had his share of love affairs, but nothing had quite convinced him of the bliss of fatherhood. However, when Canadian gymnast Emilie Livingstone walked into his life, he decided it was worth exploring after all.  The two make an unlikely pair, but their unity demonstrates it’s possible to find contentment at any age.

He wasn’t “passionate” about fatherhood before meeting Emilie

Jeff revealed to Radio Times he only managed to tap into his paternal impulse in his sixties. Before meeting Emilie, he had never truly interacted with children and didn’t think fatherhood would be in the cards. “I never thought that I was going to do it,” he said.  There’s an additional risk to producing offspring at a later age, both physical and emotional: you have to raise the child knowing you might very well be senile by the time they begin college. But something about building a family with Emilie allured him to the idea, and so he decided to undertake the endeavor at an age when most dads are getting ready for retirement or grandfather duties.

I had never been particularly passionate [about fatherhood] or envisioned it for myself – I don’t have any nieces or nephews, had never seen a birth before.

He told the publication how the subject of childrearing did get raised a few times in both his prior marriages, but it had only appeared in the form of “fantasy talk.’ Neither he nor his ex-wives, Patricia Gaul and Geena Davis, had bothered with tangible action to turn their dreamy conversations into reality. This probably worked to their advantage as he and both his ex-wives were spared from the “drama” of involving children in the divorce proceedings and negotiating nasty custody arrangements.

Upon marrying Emilie, however, Jeff decided it was a path worth pursuing. It wasn’t an immediate call, though. The couple “thought about it for a year,” after which Jeff brought up the matter with his therapist. They “excavated” and deliberated over their concerns for a whole year in therapy and finally came to a resolution. “I said, ‘Yeah, this sounds kinda good, let’s get married and have kids,’” said Jeff. He stated that the addition of their sons Charlie Ocean and River Joe to the mix truly completed them and that he hopes the family will “be together now” for good.

Though the world might impose their judgment on Jeff Goldblum for being an “older dad,” the actor himself doesn’t think it’s too late at all. In fact, he said he’s “right on schedule” and is grateful that he was able to embark on this adventure with the right partner. As lovely as his previous marriages were, he didn’t feel ready or passionate. It could be a compatibility issue, it could be a timing issue, it could be as simple as not wanting to put yourself through the financial or emotional strain.

I feel right on schedule and I love our two boys. Everything seemed to happen perfectly. I appreciate it wildly.

Jeff Goldblum to US Magazine

Jeff proudly asserted he wouldn’t take back the sequence of events that led him up to fatherhood. He “wildly” appreciates it and realizes that the chronology of what needed to happen to help him prepare and become accustomed to the idea was just perfect.

Of course, he acknowledges the irony of becoming a first-time dad at 62. The Jurassic Park actor said a friend told him “to look for schools with ramps!” Though he’s maintaining a sense of humor about the situation, he does fear death and does dread having to say goodbye to his young boys at some point. “It’s not that it doesn’t occur to me. I would not want to say goodbye to them prematurely,” he said to The Times. Obviously, he wishes Mother Nature prolongs the inevitable for as long as she can since Jeff doesn’t want an “extra” reason to be disappointed over his death.

I see dads who are younger. I’m feeling good. I can do everything […] I am glad I didn’t have kids until now really. I don’t know that I was equipped and I was busy and probably more self-involved than I’m possibly capable of now.

Jeff Goldblum to The Times

At the moment, he’s not too concerned about balancing his age with the dynamic responsibility of raising toddlers. In a way, being older and having already achieved his aspirations in his field, he can be more involved in his children’s upbringing. He “can do everything,” from dropping them off to karate class to participating in swimming lessons with them. Nothing is holding him back, and he’s eager about being a hands-on dad.

In many ways, he and his wife suffer the same plight as other new parents. They have to get up continually through the night, change the diapers, feed the babies, and still find the time to check in with each other and preserve their romance. “It’s challenging,” he said. “But we are very focused.” He hails Emilie as a “superhero” and comments on her persistent ability to juggle everything and still wrap it all up in a tidy bow.

Jeff’s evolution over the last fifteen years underscores the criticality of keeping an open mind. Of course, some people will stand firm on their decision and shouldn’t feel pressured to budge. But some people will undergo transformations in their personal lives that might force a re-examination of their own passions and desires. Emilie’s arrival in Jeff’s life enabled him to reframe his thought process and take the time to genuinely delve into his inner self. He didn’t make a spur-of-the-moment decision; he, Emilie, and the therapist moved through the motions with sincerity, honesty, and patience.

His remarkable attitude toward fatherhood also showcases the power of positivity in the face of judgment, existential dread, and nature itself. It’s never too late to add a new item to your bucket list and partake in a new venture, whether that’s fatherhood, marriage, or a change of career. Parenthood is a life-changing phenomenon that is magical in its own way, so don’t let your age, your marital status, or your circumstances hold you back.