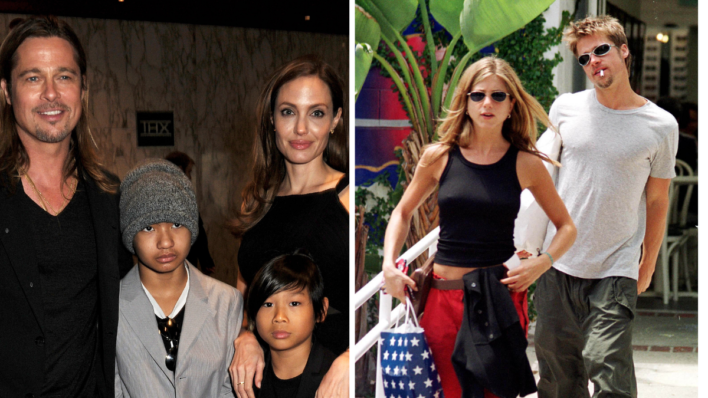 Jennifer Aniston, Kids, and Marriage: How Jen’s Choice To Not Have Children With Brad Pitt Is Not The Reason Their Marriage Failed

If Brad Pitt supported Jennifer Aniston’s choice to not become a mother, then what was the real reason he left her?
By Shaoni Das    September 13, 2021

If Brad Pitt supported Jennifer Aniston’s choice to not become a mother, then what was the real reason he left her?

Jennifer Aniston was born on February 11, 1969, in Sherman Oaks, Los Angeles. Her family members include her famous father and soap opera star, John Aniston, actress mother Nancy Dow, and half-brothers, John T. Melick and Alexander John Aniston. Being the celebrity she is, Jennifer Aniston has had her fair share of media attention. She’s been interviewed by various outlets; from TV shows like Jimmy Kimmel Live to magazines like Marie Claire orVanity Fair.

Jennifer Aniston has been known to be a kind person with a great sense of humor. Aside from her roles in comedies, we got a taste of her humor when she pranked BBC Radio 1 host, Chris Stark, during an interview. When he asked her about making “the first move” on a man, Jennifer told the radio host she was offended by his line of questioning and that it was inappropriate given that she was in a relationship with Justin Theroux at the time. DJ Scott Mills, the show’s co-host and one who orchestrated the prank, eventually walks in and they explain it was all in good fun, but this wasn’t before Chris Stark ended up with tears in his eyes over the exchange.

It’s been over fifteen years, and audiences are still trying to decipher the Jennifer Aniston-Brad Pitt-Angelina Jolie debacle. The consensus is that Brad Pitt couldn’t resist Angelina Jolie’s feminine wiles on the set of their 2005 film Mr. and Mrs. Smith, so he quickly abandoned Aniston for Angelina Jolie. Underpinning this theory is the widespread belief that Angelina offered something Jennifer didn’t: the opportunity to have children.

None of the parties have confirmed anything, but because Jennifer Aniston is a 40+ year old actress without a child, people have shamelessly peddled rumors about her desire to become a mother and how this may have essentially splintered her five-year marriage with Brad. Never mind that Brad is universally believed to have had an extramarital affair with Angelina, the controversy was centered around a woman’s choice, or supposed lack thereof, of building a family — even though there is no proof supporting this conjecture.

It’s high time we break down this commonly held assumption and dig deeper into Brad and Jennifer’s attitudes regarding parenting.

Jennifer Has Always Wanted to Be a Mother: “I Did, and I Do and I Will!”

For starters, Jennifer Aniston has never been opposed to having children, so the public running away with this narrative is nothing short of devious. In a revealing profile inVanity Fair a year after her divorce, Jennifer reaffirmed her yearning to experience motherhood.

I’ve never in my life said I didn’t want to have children. I did and I do and I will!

The Friends star outlined the double standard associated with singling out her childless status to perpetuate a myth. She was only in her mid-thirties at the time, so it seems even more bizarre in hindsight that the public would lambast their beloved Rachel for focusing on her profession. “A man divorcing would never be accused of choosing career over children,” she said. She added how she’s always modeled her life on women who can balance their work with family, those who can seemingly “have it all.” She doesn’t want to limit herself in the least and would “never give up” her family for a career.

Nonetheless, she ended up on the receiving end of a ferocious rumor mill. The public was desperate to identify an inciting cause to the split, so they chose to pile on her without fear of consequence. Nobody asked whether Brad wanted children or if the couple were emotionally ready for the responsibility.

RELATED: As A Single Mother, Angelina Jolie Defies The Odd Of Her Broken Family

In fact, a mutual friend told Vanity Fair that Brad, not Jennifer, was the one uncertain about parenthood. “When Brad and Jen were in the marriage, having a baby was not his priority—ever,” they told the mag. It was more of an “abstract desire” for him but an “immediate” concern for Jennifer. The actress, upon completing the final season of Friends in 2004, even told The Guardian she’s ready to explore maternity quite soon. “It’s time. You know, I think you can work with a baby” she said at the time. “So I’m just truly looking forward to slowing down.”

So Why Did Brad Leave Jennifer to Raise a Family With Angelina?

If Brad was so hesitant at the time, why did he pursue the strenuous task of raising six children with Angelina Jolie?

According to sources, his journey into being a dad wasn’t so much an active decision but a natural byproduct of being in a relationship with Angelina. She’d been a single mother to son Maddox and was in the process of adopting her second child when she fell in love with Brad. That’s why he instinctively decided to step up to the plate and undertake the responsibilities of a father. If you’re dating a single parent, you’ll realize it’s next to impossible not to get attached to their child. They quickly become your family, and you can’t help but become a hands-on figure in the children’s lives. If that’s what truly happened with Brad Pitt and Angelina Jolie, it’s no surprise why he decided to embrace the parenting adventure with arms wide open.

RELATED: Jennifer Aniston’s Biggest Regret From Her Marriage to Brad Pitt Is a Lesson for Us All

Obviously, we can’t confirm if this is what occurred, but looping back to Jennifer, this alleged account does explain why Brad seemed so willing to devote himself to parenthood with Angelina but not Jennifer. Nevertheless, it doesn’t explain why Jennifer Aniston faced the brunt of the abuse in the wake of the divorce announcement.

There is a pressure on women to be mothers, and if they are not, then they’re deemed damaged goods. Maybe my purpose on this planet isn’t to procreate. Maybe I have other things I’m supposed to do?

She and Brad made a wonderful pair and undoubtedly bonded over a number of interests and passions, so does she automatically become a bad wife if she doesn’t have a child as quickly as she can? Is her entire worth based on her decision to bring life into this world?

Of course not. And while a man whose partner decides they don’t want children – whether at all or later – will inevitably be forced to make a decision about staying in the relationship or not. Not because this partner is no longer loveable or worthy, but because their desires in life no longer align. Unfortunately, Jennifer has been positioned over the last sixteen years as the villain in this situation. Her choosing not to prioritize pregnancy has been cited as the number-one reason as to why their marriage failed.

RELATED: What We Can Learn From Jennifer Aniston And Brad Pitt’s Final Vacation Pictures

Brad did the whole song and dance with Angelina: they welcomed six children — three adopted, three biological — they walked down the aisle, and she changed her last name. They did everything a traditional couple would, but did it protect their marriage? Not at all; instead, they’ve gone through a nasty custody battle that’s exposing the worst of a 12-year partnership. Having a baby isn’t going to “save” your relationship. Sure, it can enrich your relationship and enable you and your partner to take upon new challenges, but it’s not a guarantee to make you happy.

What Jennifer Aniston Has to Say About All the Pregnancy Rumors

The Morning Show star has tried to keep as much of her personal life as private as possible, but unfortunately, that’s easier said than done. This is especially true when the whole world is seemingly obsessed with whether or not she’ll ever have kids. Despite her light-heartedness and easy-going nature, Jennifer Aniston has been vocal about her feelings surrounding the world’s obsession with her personal choices. In 2016, Jennifer Aniston wrote a powerful essay for The Huffington Post about this very subject. Evidently and understandably, Jen wrote, “I am not pregnant. What I am is fed up.”

Then in 2021, Jennifer Aniston opened to The Hollywood Reporter about the subject again, explaining how “hurtful” and “nasty” it was for her to go all these years trying to ignore all the pregnancy rumors. The media immediately painted her as the villain in her divorce with Brad Pitt, saying that he had no choice but to leave her as she refused to have kids. “I used to take it all very personally. And the whole ‘Oh, she chose career over kids’ assumption.”

You have no clue what’s going with me personally, medically, why I can’t… can I have kids? They don’t know anything, and it was really hurtful and just nasty.

“Now you’ve got social media. It’s almost like the media handed over the sword to any Joe Schmo sitting behind a computer screen to be a troll or whatever they call them and bully people in comment sections,” she explained, adding that there’s “such a cruel streak in society.” “What the tabloids and the media did to people’s personal lives back then, regular people are doing now,” she said. “Although I haven’t seen a tabloid in so long. Am I still having twins? Am I going to be the miracle mother at 52?” She also compared her experience with that of Dolly Parton, saying how unfortunate it is that although Dolly Parton never had kids, people aren’t condemning her for it or trying to “put her in a white picket fence.”

There’s More to Love Than Raising a Family

Jennifer has been unjustifiably maligned in the lengthy Jen-Brad-Ang saga. Just because she dares to live as a childless, husband-less woman in her fifties, she’s immediately characterized as a mean spinster who’s never going to find someone to settle down with. The truth of the matter is that you shouldn’t pursue a relationship seriously if you aren’t on the same page regarding children. This decision can be a dealbreaker, so if you and your partner are of two minds about this, it’s better to go your separate ways — as tough as it may sound.

There’s no confirming what transcended between Jennifer and Brad — who wanted kids, who didn’t want kids, why did they wait so long — but she shouldn’t be deemed an unsuitable wife under any circumstance. Just because she didn’t pop out a few babies for Brad doesn’t mean her personality and companionship weren’t enough to sustain their marriage. Marriage and parenthood are two disparate entities, and you shouldn’t make the mistake of conflating them. Being a good wife is not synonymous with being a good mother, and vice versa. You are more than your ability to reproduce; before you venture into parenthood, consider your other qualities and ask yourself whether you need to work on yourself before devoting yourself to such an ordeal. If you believe you don’t need to add a few young ones to feel worthy, that’s a fair choice.