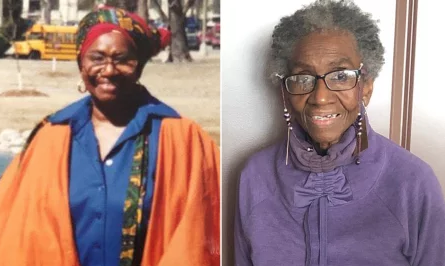 At 86-years-old, Jessica Slaughter is feeling better than ever. After struggling with her weight for most of her life, Slaughter
By MJ Kelly    February 1, 2019

At 86-years-old, Jessica Slaughter is feeling better than ever. After struggling with her weight for most of her life, Slaughter

At 86-years-old, Jessica Slaughter is feeling better than ever.

After struggling with her weight for most of her life, Slaughter was in her 70s when she started taking daily walks around her one-bedroom apartment, in an effort to lose the weight she carried around since childhood.

“Even as a kid in Mississippi, I was always the fattest kid in the class. I got teased a lot,” Slaughter told KSDK. “I didn’t know how to stop eating. Fried chicken. Bacon and eggs. Desserts, like cakes and pies.”

Motivation in a medical diagnoses

When her doctor told her she was pre-diabetic, she found the motivation she needed to take action.

Following a friend’s recommendation, she adopted a vegan diet, but the secret to her weight loss success was her new exercise routine, which she still practices every day.

The retired substitute teacher walks miles, between her living room and kitchen every day.

Her determination and consistency has paid off. Slaughter has lost 120 pounds since starting her weight loss journey.

“I went to my doctor for a checkup. He told me my health was better than his,”  she said. “I was a borderline diabetic. I’m free of all that, and I know it came from my way that I eat and exercise.”

Her grand-daughter suggested she keep track of her steps with a Fitbit.

“My granddaughter told me ‘Mama, get you a Fitbit.’ I said ‘What the hell is a Fitbit?” said Slaughter.

Now, she wears hers every morning and has worked her way up to 3,000 steps daily.

Slaughter hopes that sharing her story will encourage other seniors to get up and get moving.

“I just want seniors to know just because we’ve gotten a certain age, we don’t have to stop living,” Slaughter said. “I want to tell them that there’s a better way of life if they choose.”