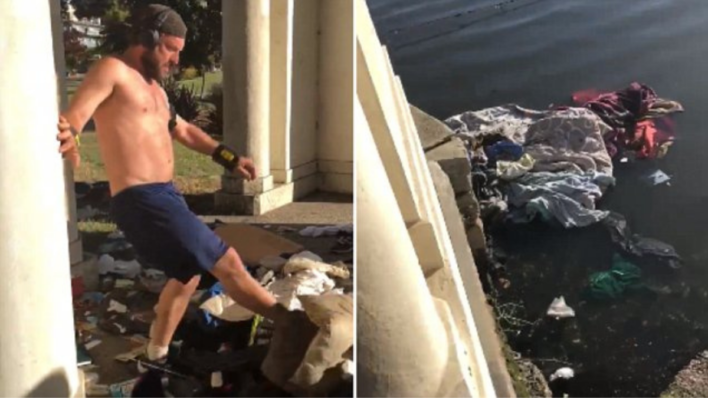 One cold cyclist’s rampage was stopped in its tracks by a community standing up for its own. Psycho cyclist California
By Bryan Liquor    August 26, 2021

One cold cyclist’s rampage was stopped in its tracks by a community standing up for its own.

California is known for its beaches and sun, but the scene was surreal in its ugliness. A shirtless male cyclist was spotted tossing a homeless man’s belongings into Lake Merritt.

As onlookers asked the man what he’s doing, he replied “I’m picking up trash. What do you want me to do?”

Passerby JJ Harris – who knows the homeless man as ‘Drew’ from his morning coffee runs – stopped to record it all on his phone.

He and the onlookers were shocked.

Harris’s video went viral, with the rampaging cyclist getting the moniker ‘Jogger Joe.’

Things went from bad to worse the following day.

Matt Nelson was walking by the same park when he spotted a man chucking items in a lake. He recognized the man as ‘Jogger Joe.’ Nelson took out his phone and started recording.

“I just started asking him, what’s going on here? Why would anyone throw this man’s possessions in the lake? Why do you feel that you have that level of entitlement and control over another person’s wellbeing?

“He didn’t really have an answer, so his answer became violence.”

The cyclist stole Nelson’s cell phone and assaulted him, leaving him with a concussion. Nelson uploaded the entire awful encounter to his Facebook page.

However, karma – and the law – came to pick up the trash. 30-year-old Henry William Sintay was arrested and plead guilty to misdemeanor battery and misdemeanor vandalism and was sentenced to five years probation.

Meanwhile, the community rallied around Drew. Strangers gave him words of encouragement. One local, Kenzie Smith, saw the video and took action.

“I took bottles of water. I took a blanket. I took food,” he recalls. “I gave Drew the stuff and said, ‘Tomorrow I’ll be back.'”

Smith went a step further, launching GoFundMe page to help get Drew off the streets.

“Like the thousands of other people in the Bay Area without homes, Drew is one of our neighbors,” he wrote.

Altogether, Smith raised $14,000. However, still affected by what happened, Drew turned it down.

“He declined the offer,” Kenzie says. “He said that [the lake] was his home. And he said he didn’t really want to be a part of the world.”

“I think he’s still trying to cope with all the madness that went on.”

Instead, the funds were donated to two homelessness charities – the Homeless Action Center and the East Oakland Collective.

Kindness and courage will get us through

According to one report, California is home to over 150,000 homeless, which is a quarter of all the homeless in the United States. Over the past year, the pandemic and spiking housing costs have only made a bad situation worse.

For those of us lucky enough to have shelter and a full stomach, it’s easy to forget that they’re people like us who’ve caught a bad break or need professional help.

What they need is what all of us would need in a difficult time: Kindness, compassion and courage. Courage, both to offer a helping hand, and to stand up to bullies like Jogger Joe.

Keep that in mind the next time you see someone like Drew. You’d be amazed at the power even a small gesture can have.