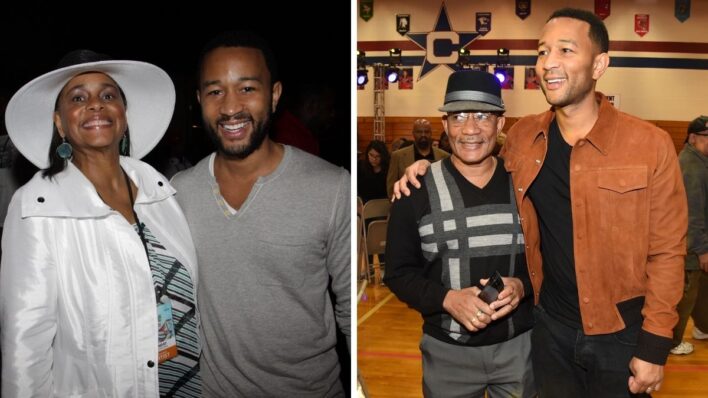 John Legend may seem like he has the perfect family with Chrissy Teigen but his own upbringing wasn’t without its hardships.
By Shaoni Das    March 3, 2021

John Legend may seem like he has the perfect family with Chrissy Teigen but his own upbringing wasn’t without its hardships.

John Legend has slowly but steadily become a sweetheart of the entertainment industry.

It helps that he’s married to one of the funniest, most charismatic, and beloved influencers in the world. It also helps that he is a musical genius who can elevate any moment with his angelic voice and his piano prowess — not to mention his stunning good lucks. He’s a complete picture of passion, humanity, and grace.

However, John and Chrissy’s picture-perfect marriage and family can’t hide the singer’s rather painful beginnings. Long before he was an EGOT-winning performer and a serial ladies’ man, John struggled to connect with his parents, particularly his mother.

We’re all familiar with difficult parent-child relationships, but John has had to see his mother both inflict and endure some truly appalling things, some of which caused him to become estranged from her for decades. At the same time, his upbringing has actively informed his personality, approach to family, and activism work. Therefore, it’s worth slowing down and reflecting on John Legend’s early life and the role his mother has played in it.

John was born to Phyllis and Ronald Stephens in Springfield, Ohio. His father had been a factory worker at International Harvester while his mother worked as a seamstress. Both his parents were musically inclined in their own ways: Ronald was an amateur drummer, while Phyllis used to sing for and direct the church choir. Even John’s grandmother was the church organist, so it’s safe to say that John certainly inherited his family’s musical stylings.

Young John was a prodigy. His academic excellence allowed him to skip two grades, and he began high school at the age of 12. He graduated from his high school as a salutatorian and was offered scholarships to Georgetown University and Morehouse College. He ended up going to the University of Pennsylvania and became the president and musical director of the a cappella group, the Counterparts. In 1999, he graduated with a bachelor’s degree in English with a focus on African-American literature.

John Legend had no trouble setting foot in the music industry. One of his earliest acts as a musician was playing the piano in Lauryn Hill’s “Everything Is Everything,” when he was just 16.

Ultimately, it didn’t work out, and Ronald and Phyllis split up yet again. At present, he’s happily married to a woman named Deidre Hamlar.

Professionally, Ronald has moved out of the factory and has become an entrepreneur. He has his own hat company named Popz Topz, which combines the traditional straw hat with the modern cap. He told Page Six that he started losing his hair in his late fifties, so he turned to hats to “preserve the look by doing the sweep-over.”

Ronald claims that John doesn’t really wear hats but does every so often to please his dad. “He only does it strictly for business purposes and because I’m his dad,” shared Ronald.

In the special John Legend and Family: A Bigger Love Father’s Day, the singer paid tribute to his father and commended him for being a great role model.

Thank you for being such a great example. I’m so grateful that you’re my father.

Though John’s father Ronald has consistently been by his son’s side through thick and thin, it’s a whole another story with his mother. Phyllis has been a quilt-maker for over twenty-five years, and her collections are displayed in galleries and venues across the world.

As a young mother, however, she had multiple run-ins with the law. John had gotten used to seeing his mother hop in and out of jail while growing up. According to Radar Online, she was first arrested in 1997 for stealing a pack of cigarettes from the store. A few weeks later, she was arrested yet again for soliciting a plain-clothes police officer for sex. She spent five days in jail for this street prostitution incident.

A year later, she was charged with “tampering with evidence, receiving stolen property, and drug abuse,” with the report adding that she and a male partner were found with crack cocaine in their vehicle. Her last arrest took place on November 22, 1999, following theft from Family Dollar Store; she said in the report that she had stolen those items to help out an unemployed friend.

This was her last foray with the law, but the damage had been done. Just as John was making his mark on the world and getting introduced to music as a serious profession, his mother was out in a truly deplorable state, defying authority and committing petty crimes to get through the day.

John has admitted that while relations with his mother had been fraught for a long time, they’ve been able to rebuild goodwill and find a place within each others’ lives. John said that he had chosen the path of forgiveness — if not for himself, then for his children.

My mom spends a lot of time with the kids, and she loves coming to visit me at The Voice too. We’re really close now partially because of the kids. […] But you have to do some forgiving too, when you’re older. We’re in a really good place now.

Yet John maintains that his mother needed “help,” not “punishment”

John detailed his mother’s issues with addiction in an extensive essay for Time. He discussed how his personal experiences with a family member suffering from addiction bolstered his views on prison reform. He added that while the country pays a lot of “lip service” to the idea that addiction is a disease, the incarceration rates speak otherwise.

He supports the idea that people suffering from addiction or any other form of substance abuse need to be rehabilitated and reintroduced into society, not get punished for a phenomenon large outside their control. It’s indeed the mindset of addiction that drives ordinary human beings into committing crimes and hurting others — they need unconditional support and love, not pain and further alienation.

My mother’s addiction didn’t just tear her life apart; it tore me and the rest of our family apart, too. […] My mother didn’t need punishment; she needed help.

He also spoke about the necessity of decriminalizing drug possession and instead of extending humanity and compassion to those who find themselves in such deplorable situations.

John’s essay is a reflection of his own evolution as a son. He doesn’t always get along with his mother and has a hard time processing some of the actions she had taken over two decades ago. Yet, he also knows that it’s essential to forgive not just his mother but the past that forced her into those decisions.

Therefore, instead of focusing solely on his mother, John decided to devote his energies to a universal issue. He recognized that his mother wasn’t completely at fault for her actions and therefore deserved a second chance.

John has had to overcome his emotions to provide support to his mother. As a teenager, he might not have been able to understand the full extent of her mother’s struggles with addiction. He might have just judged her mother solely on her crimes without examining the range of factors that could have driven her into those behaviors in the first place. Yet, over time, he gained deeper clarity into his mother’s circumstances and so decided to divert his focus to the bigger picture.

All of us will encounter people who we will deem irresponsible, reckless, or just plain evil, but we must remember that there’s a larger system that’s guiding their situation. Of course, sometimes these are personal choices that would have happened no matter what, but we should also give people the benefit of the doubt and assume that a lot of their behavior is out of their control and is instead symptomatic of a larger issue. We should pass on quick judgments and practice empathy if we’re to hope that people will change for the better.