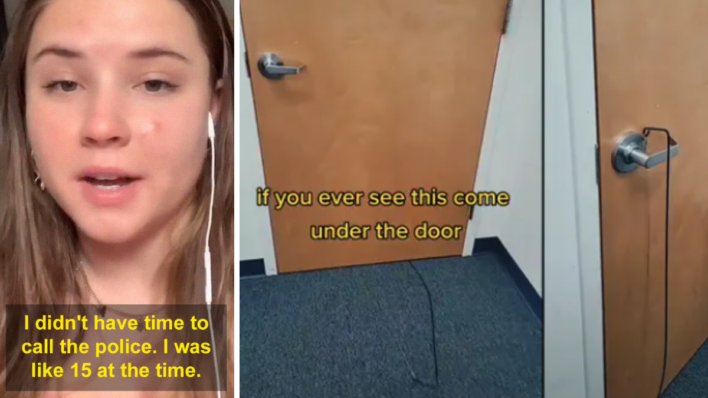 Despite being just 15, a quick-thinking TikToker outsmarted a couple of creepy men who tried to break into her hotel
By Joel Balsam    June 3, 2021

Despite being just 15, a quick-thinking TikToker outsmarted a couple of creepy men who tried to break into her hotel room. Now, she’s sharing the valuable way she managed to get rid of the invaders.

They broke into her hotel room door

Canadian Josie Bowers was on vacation with her family in Maryland four years ago when something terrifying happened.

In a series of TikTok videos that now has over 12 million views, she shared how she was alone in a Hilton hotel room in nothing but a bath towel when she saw a device poking around to try and open the door.

“Before I could shower I heard these noises, I went to go see what it was and it was this contraption. I was just standing there in my towel and this man opened the door.”

When the door opened, the then 15-year-old quickly ran to the door and locked it shut.

“Always use the deadbolt! Scariest experience of my life,” she said.

The men on the other side of the door wouldn’t give up.

“So they tell me, ‘your key card is broken and we need to get into the room and fix your keypad for you’. And so I open the door a tad bit, to see if it was a worker,” Bowers said on TikTok.

“It clearly wasn’t, they were in jeans and a T-shirt,” she added. “Hilton keeps it pretty classy, not the attire.”

Bowers explained that she recalled a tip from her stepdad, who is a police officer, to never let people know you’re alone.

“I yelled, ‘Hey dad, there’s someone here to fix the door’,” she recalled.

“As soon as they thought that I wasn’t alone, and potentially my dad was there. They ran, they were gone.”

An opportunity to warn others

Looking back on it, the teen said while the situation was scary but she’s glad she’s been able to warn others.

I’m glad I had this experience so I can teach people about it,” she said.

“Obviously I’m safe but it could have ended up a lot worse. Be safe, you can get door stoppers, always put on the deadbolt.”

A lesson for all

What were these fools thinking breaking into a stranger’s room? They’re lucky the police weren’t called or they weren’t shot.

Regardless of this scary contraption and behavior, Bowers reacted astonishingly well for someone of her age. Her experience is a lesson for all about how to react to this kind of situation. It’s also a lesson for the kind of lesson to teach our kids.