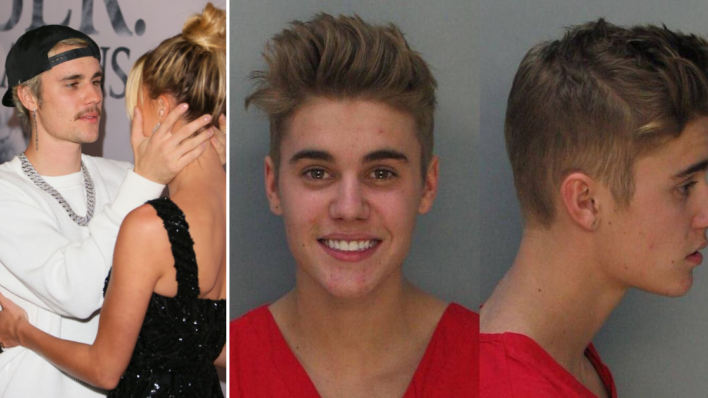 The pop star hit rock-bottom with drugs, suicidal thoughts, and finally an arrest in 2014 for driving under the influence.
By Joel Balsam    January 27, 2021

The pop star hit rock-bottom with drugs, suicidal thoughts, and finally an arrest in 2014 for driving under the influence.

The pop star hit rock-bottom with drugs, suicidal thoughts, and finally an arrest in 2014 for driving under the influence. But Justin Bieber has since overcome his demons and has his faith and partner, Hailey Bieber, to thank for it.

He had dark thoughts and took drugs

As of late, Justin Bieber has been candid about his mental health struggles since starting his singing career as a teenager.

In his 2020 YouTube documentary series, Justin Bieber: Seasons, Bieber revealed how the immense pressure from critics led him to feel depressed and have suicidal thoughts.

Throughout his teenage years, he struggled with anxiety and took drugs including lean (codeine cough syrup and soda) and “popping pills,” according to Us Magazine.

But in 2014 when Bieber was 20, he hit one of his deepest low points. He revealed in an Instagram post on January 23 just how much he struggled during that time.

“7 years ago today I was arrested, not my finest hour,” Bieber wrote in the post that showed him in handcuffs being hauled away by police after being arrested for drag racing and a DUI.

“Not proud of where I was at in my life. I was hurting, unhappy, confused, angry, mislead, misunderstood and angry at god.. I also wore too much leather for someone in Miami.”

Leather skirt jokes aside, it’s clear how much the pressure got to Bieber and how much pain he was in. But he made it through and is thankful for where he has landed.

“All this to say God has brought me a long way. From then til now I do realize something.. God was as close to me then as he is right now.”

Bieber, who avoided jail time for the DUI by doing 12 hours of anger management classes, paying court fees, and making a $50,000 donation to charity, also left an uplifting message for his fans.

“My encouragement to you is to ‘let your past be a reminder of how far god has brought you. Don’t allow shame to ruin your ‘today’ let the forgiveness of Jesus take over and watch your life blossom into all that God has designed you to be. LOVE YOU GUYS WITH MY WHOLE HEART.”

The post received an outpouring of support in the replies including from his partner Hailey Bieber, Usher, as well as Tom Brady who commented “We live and learn.”

Bieber struggled with what other people thought and looked to defense mechanisms like drugs to deal with it.

But in the end, it was his faith — and his partnership with Hailey Bieber — that helped him recover, though others may find their turning point via other methods.

You can’t help but feel happy for Bieber for overcoming so much, and for finding someone in Hailey that helps so much with personal growth.

And if you were one of those people who criticized him for no good reason back when he was a teenager, then this should make you reconsider how you judge people, celebrity or not. To improve your own relationships through self awareness, check out our piece on the wheel of emotions.