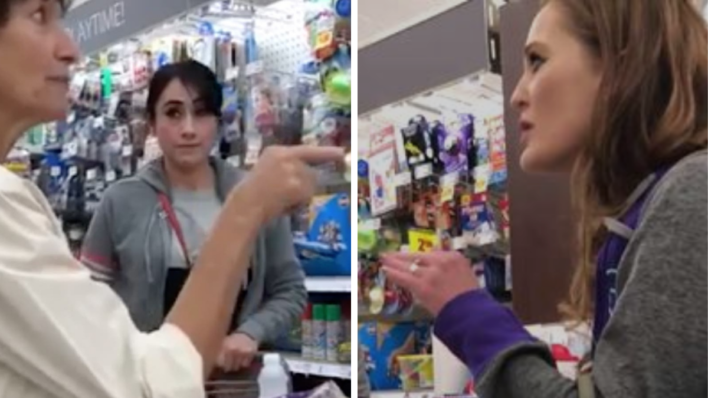 Would you stand up against racism if you saw it happening in real-time? Harassed for speaking Spanish Kamira Trent was
By Joel Balsam    August 20, 2021

Would you stand up against racism if you saw it happening in real-time?

Kamira Trent was shopping at a Colorado grocery store when she overheard a conflict happening in the next aisle over.

She told Buzzfeed in 2018 that she overheard a woman say, “You’re in America. You’re in my country. You can’t speak Spanish here. You need to speak English if you’re going to be in America.”

When Trent went to the next aisle to check it out, she saw what was going on — two Spanish-speaking women from Mexico, Fabiola Velasquez and Isabel Marin, were being harassed by a white woman, Linda Dwire. So, Trent decided to react.

“I’m calling the cops. You leave these women alone! Get out!”

Fighting back against racism

But Dwire wouldn’t leave so easily. She turned her anger towards Trent, saying, “You come from a generation that’s destroying this country.”

“No I do not. I have respect. You do not harass people,” Trent responded.

“You will lose your country,” Dwire said in a video of the incident that went viral on Twitter when it was posted in 2018. “You know what, you will lose this country.”

Police were called to the scene and Dwire was arrested for harassing the Spanish women.

2 Hispanic women were approached and verbally assaulted by a racist white lady for speaking Spanish in store.

Another white woman who saw and heard this happening immediately stepped in to defend them.

WE NEED MORE OF THIS! SEE SOMETHING SAY SOMETHING!

Not the first time the harasser did this

In interviews following the altercation, Dwire admitted that she’s done this kind of thing before when she’s heard Spanish in public, and of course, she doesn’t think she’s racist.

“It has nothing to do with race. It’s a patriotic thing,” Dwire told Buzzfeed. “When people come to my country, they need to love it enough to speak English.”

“They’d rather have their country here. I don’t mind them coming here as long as they want to be an American and not go on our welfare system,” she added. “When there are so many people that they don’t learn English, that’s what divides our country.”

But in a separate interview, Velasquez, who was one of the Spanish women at the grocery store, disagreed.

“If she wasn’t racist, she wouldn’t care what language we would speak,” Velasquez said. “It baffles me because I don’t understand what concept they have about us [immigrants]. What are we trying to take away from them exactly?”

In a Facebook post, Velasquez said she never thought this kind of harassment would happen to her, but she was grateful that Trent used her privilege to help.

“Thanks to another girl (that we didn’t know) she defended us and called the cops,” Velasquez said. “I always saw these videos on social media and I would get angry and today, it was my turn. I can say that I felt a great feeling of helplessness.”

“It felt good to see someone who was born here defend us that way,” Velasquez added.

Trent, who was praised online for helping the Spanish women, said that anyone in a similar situation should do the same.

“Stand up and say something. Letting that happen is really what’s wrong with our country.”

Discrimination is all around us, and we can’t just stand by and do nothing. This isn’t to say victims of racism need white saviors — they don’t. But using one’s privilege to help others is a great way to help create a more equal society, and that’s exactly what we saw here.

What other, perhaps more subtle, ways we can fight discrimination in our society?