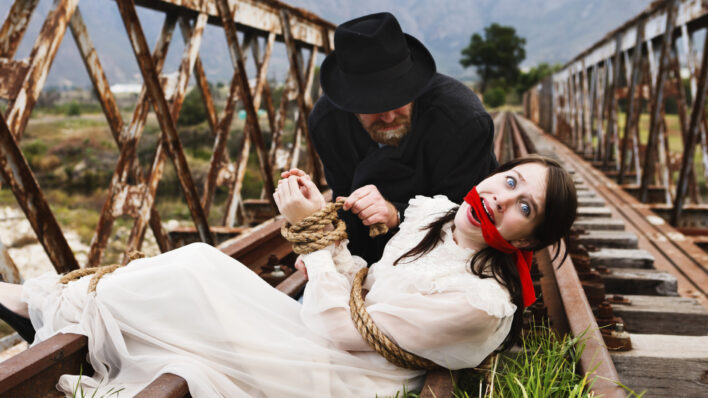 Victim, Rescuer, Persecutor: How To Stop The Karpman Drama Triangle

Let’s challenge ourselves to be authentic.

The parallels between theater and human behavior are more than metaphor. One of Carl Jung’s prominent theories speaks of the persona, the face we show to the world and hide our true selves behind. Modern-day self-development gurus promote the need for authenticity, which implies that the opposite, inauthenticity, is the common mechanism to avoid expressing their true needs, desires, or emotions.

All of us, to various degrees, develop a persona, a mask we put on in order to conform, to please, or to charm. Part of self-development is developing awareness around these masks, in order to behave in a way that is more congruent to the inner self, rather than playing different roles in different relationships.

Roles have a role to play in conflict, too. In 1968, psychologist and aspiring actor Stephen Karpman developed the drama triangle, a model that attempts to explain the underlying dynamics of dysfunctional relationships. Karpman proposed that in conflict, people take on various roles, which keep the drama alive. The three roles are: the victim, the rescuer, and the perpetrator.

When these roles remain unconscious, drama continues to play out, as they each energize each other. Healing requires the ability to identify unhealthy dynamics, to step outside the drama triangle, restore peace, and cultivate healthier ways of relating. This article will show you how.

The Three Roles in the Drama Triangle

From Will Smith’s slap to Johnny Depp’s court case, to endless analysis of celebrity couples, it seems that Shakespeare was right when he wrote that “all the world’s a stage.”

Humans seem hardwired for drama, heroes and villains, good versus bad, right versus wrong. Nowhere is this more obvious than in high-conflict relationships, that seem to have the ability to reduce the most mature and balanced adults into pettiness or exaggeration.

As long as people are stuck role-playing, it’s unlikely resolution, or de-escalation, will be achieved. Not only do roles prevent people from seeing each other’s point of view, they also mask the person’s true feelings. The first step in breaking free from this cycle is to understand the three roles that Karpman identified:

The victim takes no responsibility, instead criticizing or blaming who they perceive to be the persecutor, from which they see themselves as unfairly oppressed. Victims tend to get stuck in helplessness and hopelessness, overly focusing on problems, without offering solutions. The victim will usually look for a rescuer, a person that will enable their sense of victimhood.

Victimhood blinds people from seeing the bigger picture, empathizing with others, or finding solutions. Instead, a victim will become rigidly fixed on the story of their own persecution, and see no options for resolution. Keep in mind victimhood is an attitude, or role, where a person feels like a victim. It’s not the same as someone who is an actual victim of abuse.

If you’re not a rescuer, you’ll likely know of a few people who are. They’re the people on a mission to save others, always willing to sacrifice their own needs in order to save the day. The difference between a rescuer, as a role, and genuine help and support, is that the rescuer tends to view the victim as the victim views themselves — helpless and persecuted. As a result, they will turn against the persecutor, or enable the victim’s self-pitying narrative.

Although on the surface this seems noble, a rescuer is more concerned with rescuing than finding solutions. This behavior is often driven by guilt or obligation and tends to create a dynamic of codependency with the victim. They’re overly responsible and controlling, taking the position of “I know best.”

The persecutor tends to be rigid and strict, often fuelled by anger. Their desire to criticize or place blame on the other leads to aggressive and oppressive behavior. It’s the other side of victimhood, as a persecutor, unconsciously, also sees themselves as the victim of someone else’s behavior. Prosecutors and victims are prone to shift. You can imagine how, when feeling oppressed by someone, a victim can criticize that person, becoming a persecutor.

How the Three Aspects of Drama Roles Lead To Conflict

The initial conflict is sparked once someone takes a position as victim or persecutor, a collection of habits and thought patterns that are similar to putting on a specific mask or wardrobe and reading a role from a script. When operating together, without self-awareness, people pinball between roles. No one person or role is more responsible than the other, but all contribute to the escalation of drama by feeding off the various roles.

These roles aren’t fixed, but fluid, with people in conflict often shifting between roles, keeping the drama playing out endlessly, although certain people, or relationships, might be more prone to taking on various roles. Habitual role-playing tends to develop in early life, within the family structure. As a result, high-conflict relationships could be those with “compatible” habitual roles, such as the victim and the persecutor.

Another aspect of the drama triangle is superiority and inferiority. Each position someone takes automatically positions them as above, or below, another person. If you make yourself the victim, you place your oppressor above you. If you believe you have to rescue someone, you place them below you. Healthy relationships don’t engage in this dance, but instead, focus on mutual respect and equality.

Because the relationship dynamics that cause the drama triangle are usually habitual and deeply ingrained, stopping the process from unfolding isn’t as easy as pressing an off switch. Models are useful in creating awareness around unhealthy dynamics. The first step is seeing how Karpman’s drama triangle highlights maladaptive or harmful behaviors that often go unseen or unacknowledged.

Awareness requires self-honesty and compassion. It’s not easy to accept relationships where you might play the victim, be stuck in persecutor mode, or enable codependency by becoming a rescuer. Compassion is required, because so often in life, unhealthy dynamics form because we know no better.

Once these dynamics are fully seen, there are, fortunately, skillful alternatives. Various therapeutic models provide new frameworks to shift roles, create new habits, and eventually transcend unhealthy loops. In his 2005 book, The Power of TED, author David Emerald introduces a solution with The Empowerment Dynamic (TED).

In Emerald’s words, “Everything can be taken from a (person) but one thing: the last of the human freedoms—to choose one’s attitude in any given set of circumstances, to choose one’s own way.” If you’re experiencing qualities from the drama triangle in your own life, this mindset shift offers a tangible solution. The model is as follows:

From Victim to Creator

This mindset shift goes far beyond the triangle itself, into life generally. Empowerment is the process of re-connecting to innate qualities such as resourcefulness, self-leadership, and creativity, which starts to build self-confidence and belief in a person’s ability to deal with problems, by finding solutions. The TED model encourages people stuck in this dynamic to become the creator, envision what they would like from the situation or circumstance, and believe change is possible.

Victimhood is excessively centered on blaming the outside world, or other people, for discomfort or suffering. It lacks personal responsibility. Anyone can get stuck here from time to time, and that’s okay. But persistent victimhood can become debilitating. In order to make the shift into a creative mindset, consider the following:

From Persecutor to Challenger

My partner is also a coach working in the field of self-development. Our relationship is incredibly teaching, as it reveals a lot of misconceptions and pitfalls or awareness and spiritual concepts that have become part of popular culture. One of these is the delicate balance between being able to point out unhealthy or harmful behavior.

Many of us are conditioned to highlight undesirable behavior through blame, including me. If you start understanding relationship dynamics, early on, you’ll learn about the damaging impacts of blame, and likely try to avoid it. But that can then become its own imbalance, where, through the idea of being unaffected by other people’s behavior, you fail to express your needs.

Actually, all conscious relationships require a level of challenge. Being able to reflect or feedback on unhelpful or harmful behavior is essential. The TED framework encourages a reframe from persecutor to challenger. As the person doing the challenging, this means, rather than overly criticizing or blaming the other person (which can reinforce the victim mindset in someone else), you take the stance of challenging them.

It’s incredibly important to challenge someone with gentleness, respect, and compassion. Yes, they’ll be arguments and disagreements where things get heated and these “challenges” are overly harsh or entangled with assumptions or projections. That’s forgivable. But a healthy challenger will always attempt to communicate from a place of calm, with the intention of creating more togetherness and harmony.

From Rescuer to Coach

The rescuer pattern is deeply embedded in culture. Thanks, Hollywood. Thanks happily-ever-after-stories of princesses being rescued by the knight in shining armor. Thanks to romantic love being packaged and presented as a cure to all of life’s hardship and suffering. Anyway, I digress. The rescuer dynamic is one of enabling. Keep in mind that often these dynamics are energized and played out unconsciously because they offer some kind of egoic reward.

These can include a boost to self-esteem for someone relying on you, a feeling of superiority around being needed, a sense of martyrdom, or a savior complex. Wanting to help others is admirable and necessary and good. But wanting to rescue people is an imbalance, and doesn’t support their empowerment and growth in the long run.

Fortunately, the TED model offers a practical solution in the coach. As someone familiar with the field, coaching is highly centered in empowerment, not offering answers or solutions, but guiding the client to become the expert in their life. The tools and techniques and coaching are useful for anyone.

If you’re prone to playing the rescuer, ask yourself how you can empower the person you feel compelled to rescue. Ask them questions to give them the power to choose. Don’t offer unsolicited advice, or agree with any self-deprecating comments or stories. Don’t be surprised if the person gets frustrated, or even angry, at your attempts to enquire, rather than enable.

The beauty of the TED model is that it highlights that the reverse of the drama triangle is true. If it’s possible to get stuck in drama and spiral downwards, it’s also possible for relationship dynamics to inspire growth. For example, if someone is prone to victimhood, a lack of enablement from a rescuer gives them nowhere to go other than their own resourcefulness.

If we keep on our masks and hide behind our persona, drama often ensues. But if we challenge ourselves to be authentic? Then we support each other to grow, expand, and transcend limitations within ourselves, ever-improving our ways of relating.