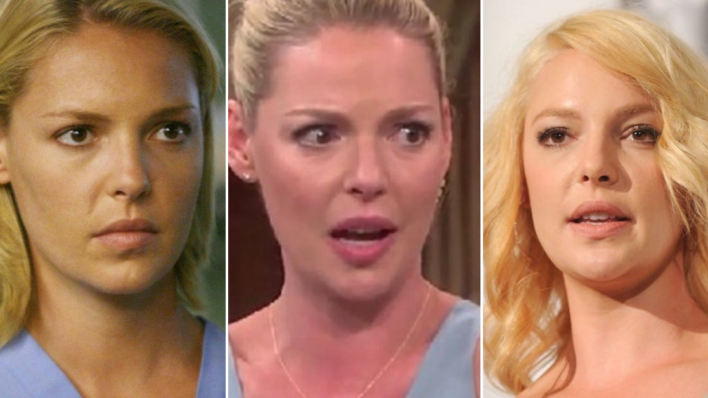 Actress Katherine Heigl says she was bullied in her industry for speaking up. But after experiencing crushing anxiety, she sought
By Joel Balsam    February 2, 2021

Actress Katherine Heigl says she was bullied in her industry for speaking up. But after experiencing crushing anxiety, she sought

Actress Katherine Heigl says she was bullied in her industry for speaking up. But after experiencing crushing anxiety, she sought help and has never felt more comfortable in her own skin.

In 2008, actress Katherine Heigl, who’d grown from a child actor into a starring role on “Grey’s Anatomy,” started to feel attacked.

It began when she complained that the 2007 Judd Apatow film “Knocked Up” was “a little sexist,” and it escalated when she turned down her Emmy nomination because she “did not feel that I was given the material this season to warrant [it].” Then, in 2009, she complained to David Letterman about working 17-hour days on “Grey’s Anatomy.”

Heigl says she was painted as a “difficult” woman in the film industry.

“What is your definition of difficult? Somebody with an opinion that you don’t like? Now, I’m 42, and that s— pisses me off.”

She was blamed for speaking up

Heigl said she was “told to shut the f— up,” and despite her repeated apologies, the industry wanted her to say sorry even more.

“The more terrified and scared I was of doing something wrong, the more I came across like I had really done something horribly wrong.”

Still, Heigl was getting hired for films and felt that if she was doing good work she’d prove her haters wrong.

“You can be the most awful, difficult, horrible person on the planet, but if you’re making them money, they’re going to keep hiring you,” she said of the film industry.

“I knew that whatever they felt I had done that was so awful, they would overlook it if I made them money — but then my films started to make not quite as much money.”

During what Heigl calls the “shunning,” Heigl started to feel extremely anxious.

“I think my family, my mother, my husband, my friends were scared. And I regret deeply that I scared them like that. But I just couldn’t control it. I had no tools,” she said, adding that mental health issues were rarely discussed in her family.

In 2016, Heigl had another burst of anxiety and she finally sought the help of a therapist.

“I asked my mom and my husband to find me somewhere to go that could help me because I felt like I would rather be dead,” she said. “I didn’t realize how much anxiety I was living with until I got so bad that I had to really seek help. You can do a lot of inner soul work, but I’m a big fan of Zoloft.”

Would Heigl be treated this way today?

Looking back on it, would Heigl face the same kind of attacks for speaking up as today? In a post-#MeToo world, it’s hard to imagine she would.

“She has very strong convictions and strong opinions on certain things, and she doesn’t back down from letting you know if she feels like she’s been wronged in any way,” added friend and actor James Marsden.

“I’ve always seen that as just strength of character. I can see how that can get construed as being difficult or ungrateful or whatever. But if you know Katie, it’s simply because she has the courage to stand behind something she believes.”

Heigl hasn’t let the “shunning” ordeal keep her quiet. She’s back to doing what she loves with a new Netflix series, “Firefly Lane,” was outspoken about the killing of George Floyd, and has formed a community with her fans by responding to their comments on social media.

“It took me a long time to feel confident enough to read their comments because I just assumed the worst,” she said. “Now, it feels like a little community. I’ve tried to rebuild that trust with my fans through social media, show them more of who I am off camera.”

She’s also stopped feeling afraid to speak up to her producers.

“I spent a lot of years just being the actor hired,” Heigl said. “I feel now I have enough experience and enough wisdom to have a voice, to collaborate about character, about story, about cast. It’s about having a seat at the table.”

Coping during the pandemic

During the pandemic, Heigl has been coping by spending time with her family in Utah, watercolor painting, and watching Netflix’s “Bridgerton.” Overall, she’s feeling much more balanced.

“I think she has found the person that she truly is, and she’s found her way to be that person with the world,” her husband said. “She just seems more at ease with family, career, and life itself, and I’m really super proud of her for that.”

Heigl agrees: “I’ve grown into accepting that ambition is not a dirty word, and that it doesn’t make me less of a feminine, loving, nurturing woman to be ambitious and have big dreams and big goals. It’s easier to be happy because I have a little more gentleness for myself.”

Despite being pushed down by her industry, Heigl kept moving forward. She continued to do what she loves and even after going through crippling anxiety she ultimately refused to stop being herself.

Her passion and drive to continue speaking up is truly inspiring and proves how impossible it is to keep a strong woman down.