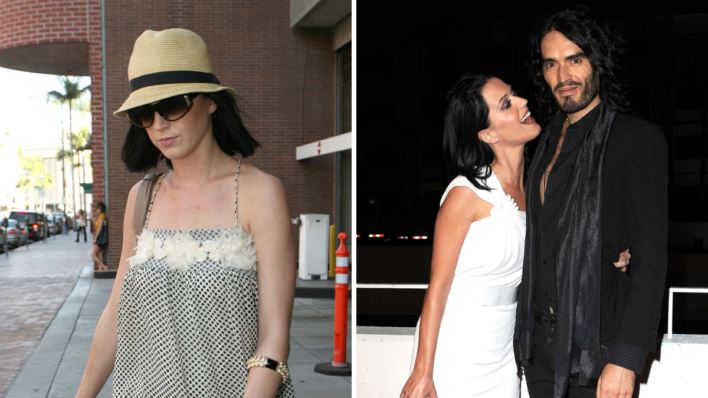 Katy Perry reveals she never spoke to Russell Brand after he asked her for a divorce via text 10 years ago.
By Shaoni Das    August 3, 2021

Katy Perry reveals she never spoke to Russell Brand after he asked her for a divorce via text 10 years ago.

There are good marriages, there are bad marriages, and there are absolute train-wreck marriages that should have never been instituted in the first place.

Katy Perry and Russell Brand’s marriage unsurprisingly falls into the third category. Individually, they are chalk and cheese and likely had no business falling madly in love with each other. Yet, a four-month courtship was all it took for the two to get engaged during a vacation at Jaipur, India. Not that there is anything wrong with whirlwind romances, but it’s well-documented at this point that Katy and Russell weren’t on the same page when they embarked upon this momentous journey together. Sad to say, but they weren’t even in the same universe.

It’s one of the rare cases where incompatibility throws a spanner in the works almost immediately and destroys everything in its path without any care or concern. The devastating ramifications of their ill-advised union continue to plague Katy and Russel to this day, yet they’ve both done well to shake off the pains and settle into their peaceful domestic lifestyles.

Here’s the set of circumstances that led to this notorious Hollywood divorce and the lasting impact it had on the parties involved:

Katy and Russell tied the knot on October 23, 2010, just ten months following their engagement, and just a few kilometers away from the grounds where Russell had proposed. The first and only year of matrimony appeared to be stable and lovely, though encumbered with a slew of pregnancy and breakup rumors. Katy went so far as to go on Twitter and declare everything was A-OK in the Perry-Brand household.

Unfortunately, her assertion turned out to be untrue as Russell filed for divorce on December 30, 2011. The real kicker is that Russell communicated his intention to divorce Katy with a mere text message and nothing else. “Let’s just say I haven’t heard from him since he texted me saying he was divorcing me December 31, 2011,” the California Girl told Vogue in 2013.

At first when I met him, he wanted an equal, and I think a lot of times strong men do want an equal, but then they get that equal and they’re like, I can’t handle the equalness.

In the same profile, Katy shed light on the possible factors that may have led to the dissolution of her marriage. Accusing Russell of not appreciating “equalness” in his partner, she said his attitude felt “controlling” and that he didn’t like Katy being a “boss” on tour. However, Katy admits this wasn’t what instigated the irreparable end; the real “truth” she’s choosing to keep locked away until there is a just cause for her to disclose it publicly. At first, she felt a semblance of responsibility for the brutal way the partnership halted, but over time, and with the exposure of this “truth,” she realized that their challenges were much deeper and couldn’t be resolved through communication or understanding.

On the other hand, Russell explained he wasn’t so much intimidated by Katy’s success as he was repulsed by her fame. The English television personality has built his entire comedic career off of satirizing the vain and artificial nature of Hollywood; he claimed he wasn’t particularly fond of being associated with “vapid, vacuous, plastic, constructed, mindless celebrity” and was keen on focusing more of his effort on philanthropy. He couldn’t bridge the gap between his wife’s theatrical persona and his own passion for advocacy. As he mentioned in his documentary BRAND: A Second Coming, he was tired of being known as “Katy Perry’s husband.”

He also told the W Channel that Katy’s packed schedule widened the gap between the two of them, and it became harder and harder to see the I Kissed A Girl singer. Katy contested this reasoning, saying she tried her best to spend time with him. “I tried to come home as much as I possibly could.”

In a Marie Claire interview, Katy elaborated why his wanting her to be “home” had more to do with his insecurities and jealousies than genuine longing. In her view, Russell couldn’t stand seeing her flourish on the global stage and wanted to essentially domesticate her into a dutiful wife and mama. That’s why she reckons Russell pushed for a baby. “I think it was part of, if I have a kid, then I would have to sacrifice – I’d have to be home more,” At the end of the day, Katy didn’t want to welcome a child unless she was completely ready and prepared – which happened in 2020.

I was in bed for about two weeks. I was pretty f–ked, yes. It hurt a lot. My self-worth was in someone else’s hands which is never a good idea because it can be taken from you at any time.

It’s clear as day that Russell and Katy rushed down the aisle and weren’t in a fit state to address each other’s concerns. It’s impossible to narrow down a precise source of their marital tension or attribute blame to any one person, but it’s safe to say the shocking downfall of the relationship did inflict seismic trauma on Katy. The mother-of-one told Vogue India she became depressed and “did not want to get out of bed” for days on end.

It forced her to go on a lengthy mental health journey that brought countless lows, a few highs, and a whole lot of ‘okay’ moments that allowed her to gain a new perspective on her journey up to this point. She required meditation, medication, therapy, and personal growth initiatives to pull her out of the slump. Finally, the arrival of Orlando Bloom and daughter Daisy empowered her to approach her life with an entirely different lens.

The most shocking developments in life push you to grow

While Russell’s way of announcing his divorce to Katy was absolutely unacceptable and bore severe consequences, especially in terms of her mental health, it functioned as the force Katy needed to take control of her wellbeing and self-worth. You’d rather rip off the bandaid than drag out the misery over years and decades. Russell should have approached this development with the utmost tact and respect; he may have failed in this regard, yet it enabled Katy to evaluate herself in relation to her romances and explore an identity that thrived independently.

These shocking circumstances will shatter you and send you to solid bottom. Yet, when you’re at your lowest, there is a way up, and it’s through the climb when you discovery wonderful things about yourself and realize you’re stronger than you had previously believed. The lows will pass as long as you maintain faith in the highs.