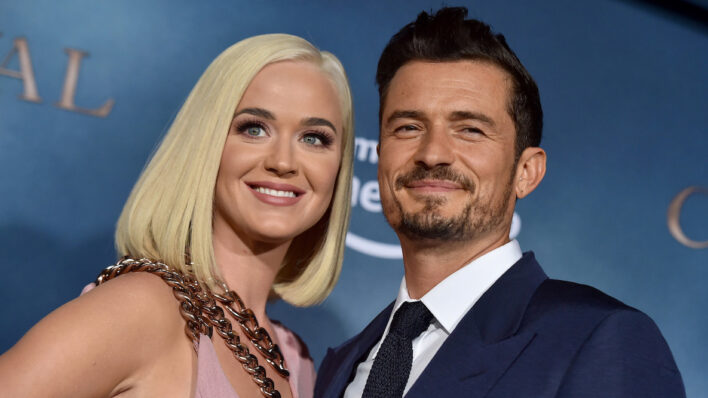 Katy Perry and Orlando Bloom’s relationship took the world by surprise with its unlikeliness but the two have shown the enduring strength of their love.
By Matt Valentine    March 6, 2019

Katy Perry and Orlando Bloom’s relationship took the world by surprise with its unlikeliness but the two have shown the enduring strength of their love.

How did pop queen Katy Perry and our beloved Will Turner (or Legolas, if you’re a Lord of the Rings fan) meet?

“We bonded over and an In-N-Out burger about three years ago at the Golden Globes,” said Perry in an interview with Jimmy Kimmel. “He stole one off of my table… And I was like, ‘Wait– oh, you’re so hot. Fine, take it.’”

They would meet again a short while later at the 2016 Netflix Golden Globes after party and hit it off.

“Katy literally dropped to the floor and was waving her booty around, beckoning Orlando,” a source later told Us Weekly of the duo’s hilarious dance-off.

And just like that, Perrybloom, as we know it, was officially on.

Why Katy Perry and Orlando Bloom are a true power couple

How Orlando led her to recover from depression

As many know, Katy experienced a major (and very public) heartbreak when her marriage to the British comedian Russell Brand came to a disastrous end only after 14 months.

“He’s a very smart man, and I was in love with him when I married him,” Perry told Vogue. “Let’s just say I haven’t heard from him since he texted me saying he was divorcing me December 31, 2011.”

That is a pretty horrible way to find out about one’s divorce. And from his side, Russell had been very vocal and, at times, nasty in his reports of his short-lived marriage with Katy. In his Netflix documentary, Brand: A Second Coming, he was vocal about the life he was living while with Katy. As he said, “Vapid, vacuous celebrity. Fame and power is b——t.”

From her side, Katy’s reflections on their relationship identifies one of the major issues that led to their end.

He didn’t like the atmosphere of me being the boss on tour. So that was really hurtful, and it was very controlling, which was upsetting.

The divorce led Katy to an episode of depression, which she was very honest and open about. Oddly enough, it was Orlando who helped her in her journey towards recovery.

Orlando is like a sage. When we first met, he said we would pull the poison out of each other. I’ve never had a partner who was willing to go on an emotional and spiritual journey like Orlando. It’s challenging, because you’re facing all the things you don’t like about yourself.

And sure enough, Orlando can certainly relate to her experience. His marriage to Miranda Kerr, whom he had been with since 2007, ended in 2013. Because the two have a son together, moving on and finding a stable ground as separate parents was a difficult thing.

After his divorce, Orlando’s love life was a mess for a while. In 2017. he got a waitress sacked after hooking up with her, as her employers disapproved of “fraternizing with the clients.” He was also snapped kissing Selena Gomez, while it was still early in the onset of his relationship with Katy.

However, with time, Orlando managed to find stability in his relationship with Katie, but that was not easy either.

They had to take some distance from each other

For a while though, it looked as though Katy and Orlando weren’t meant to last as reports emerged stated that the two had called it quits. But whether it was relationship troubles or media hype, the two formed a united front and had an amazing Thanksgiving to finish the year with one another.

While nobody knows exactly what had caused this temporary rift between them, inside sources were reporting on Orlando not feeling ready to commit to another relationship.

Yet, months later, the two were still going strong as Perry threw Bloom an extravagant surprise party (even flying in his mom) for his 40th birthday.

However, by years’ end, both Katy and Orlando’s parties confirm that “Orlando and Katy are taking a respectful, loving space at this time.”

But less than a month later, the two began to be spotted together again sparking rumors of whether it was love or friendship. Six months later a source confirmed to The Sun that they were truly back on (if they ever were off!).

“Katy wants to make things work this time around. She tried, but she couldn’t cut him off. She cares too much about him. This time, they’re keeping things low key — but they’re back together,” said the source.

After coming out of a rough path and finding each other again, Katy and Orlando were stronger, wiser, and more mature in love for it.

But nothing proved this clearer than when the pair announced via Perry’s Instagram that they had become engaged on Valentine’s Day of 2019.

Hours after Perry’s mother, Mary Hudson, shared photos of what she said was their engagement party on Facebook, the pop star shared a photo of her showing off a brilliant diamond ring with Bloom just out of frame on Instagram with the caption, “Full bloom.”

We went to dinner, and I thought we were going to go and see some art after. But we pulled up to a helicopter, and the funny part is we had champagne in the helicopter and the box was in his pocket and he had written down everything he wanted to say on a note. You know, to divert, right?

Katy went on to tell the story of a hilariously nervous Orlando Bloom. “

“We landed on a rooftop, and my whole family was there, and all my friends. He did so well,” said Perry.

Now with the wedding in the works, Katy is planning on “slowing down her career this year,” a source told People. They “want to get married and start a family sooner rather than later.”

Happily ever after looks different for everyone

On March 4th 2020, Katy Perry surprised the whole world with a new videoclip for her latest song ‘Never Worn White.’ At the end, she announced her pregnancy with a breathtaking visual of her cradling her pregnant belly.

And true to her funny self, Katy is obviously happy to have finally been able to share her pregnancy with the world.

This is only the natural progression of their relationship. Back in 2019, Orlando admitted that he wanted to have kids with Perry. Only 3 months later, and the two have announced their pregnancy!

Though they’ve had their ups and downs, both Katy and Orlando clearly are willing to do what it takes to work through the challenge of being in such a high-profile romance and aren’t afraid of allowing the relationship to develop at its own pace.

Every great relationship takes patience. We grow up being taught that “love at first sight” should hit us over the head and everything will be perfect. Then we learn it’s not and we think it’s just not a match.

But the truth is love takes work– Katy and Orlando have shown they’re willing to go the distance and love one another for who they are.

Orlando Bloom to The Times

Both Katy and Orlando helped rebuild each other after their divorces. In doing so, they have shown us that love can happen to anyone at any time, even after heartbreak. The key is to be ready to do the work and nourish it.