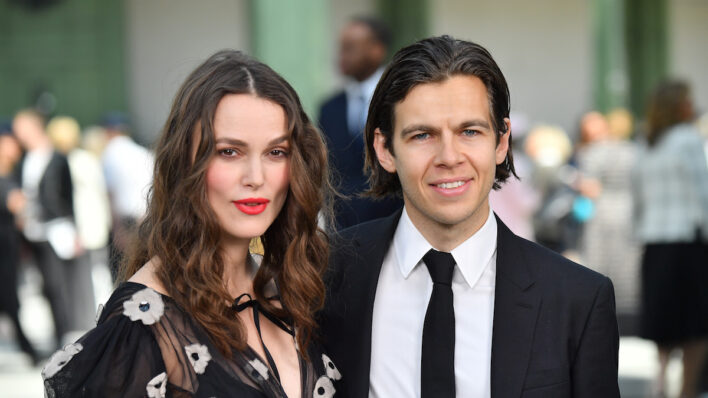 The British actress’ low-key marriage to James Righton can teach us a thing or two about enduring relationships.
By Barbara Pavone    November 17, 2021

The British actress’ low-key marriage to James Righton can teach us a thing or two about enduring relationships.

Keira Knightley never thought she’d get married. Her disinterest in matrimony started with her parents — actor Will Knightley and playwright Sharman Macdonald — who “kept saying, ‘Why bother?’” and it didn’t waver through her various high-profile relationships with the likes of Jamie Dornan and Rupert Friend. “I think they only [got married] to get a mortgage,” Knightley told Glamour of her mom and dad, but her own personal outlook changed when she met musician James Righton in 2011.

The couple has kept impressively quiet about their union, but the “Pirates of the Caribbean” star did set the record straight about their first encounter, telling The Guardian they met at a dinner party “through our mate Tim, not Alexa Chung, as people keep telling me. We were very drunk,” she confessed.

Drunk or not, they clicked — so much so that the actor found herself walking down the aisle in 2013. However, the wedding was on their terms and was the opposite of typical Hollywood nuptials. The intimate affair kicked off with a short 30-minute ceremony at the town hall in a small French village called Mazan and the bride wore a recycled dress. That’s right: She initially wore the strapless tulle gown for a pre-BAFTA party in 2008! What’s more, proving that their wedding wasn’t about material things at all, Knightley’s ring is a “beaten-up gold band” made by a friend.

As for what inspired the “Pride & Prejudice” star to finally say “I do,” it was partially practical (like her parents’ decision) but also about doing something special with her partner. As she told The Guardian, marriage “doesn’t change anything, apart from letting you be the first person by their side if they were ever in trouble, which is important.” It’s a sentiment she reiterated to Glamour, explaining, “Supposing something happens to your other half and you can’t get into the hospital without that legal paper? That’s what did it for me,” she shared. It wasn’t all about practicality, however.

When James proposed, I just thought, ‘Well, never done that before. It seemed like a fun thing to do.’

Keira and James fully embrace the realities of parenthood

Keira Knightley and James Righton married on their own terms, then they translated their un-Hollywood approach to parenting. They welcomed daughter Edie in 2015, sister Delilah followed in 2019 and, all along the way, Knightley has been candid about motherhood’s ups — and downs. While she told Elle that “the love thing is astonishing” and called it a “very primal, primal love,” she also hasn’t shied away from getting real about the unglamorous realities of giving birth. In 2018, she contributed an essay to “Feminists Don’t Wear Pink (and other lies)” in which she wrote, “My vagina split.” She continued, “I remember the s***, the vomit, the blood, the stitches. I remember my battleground. Your battleground and life pulsating. Surviving.”

Edie was actually born one day before Kate Middleton gave birth to Princess Charlotte and Knightley also used her essay to take aim at the Duchess of Cambridge for leaving the hospital just “seven hours later with her face made up and high heels on.” She slammed, “Hide our pain, our bodies splitting, our breasts leaking, our hormones raging. Look beautiful. Look stylish, don’t show your battleground, Kate,” she unleashed, criticizing, “Don’t show. Don’t tell. Stand there with your girl and be shot by a pack of male photographers.”

As she adapted to the hardships of motherhood, Keira Knightley always had James Righton to lean on, but they don’t just support each other at home, they’re also there for one another when it comes to work. However, they never allow career to outrank family and they’ve never fallen victim to unhealthy competition. Case in point: Money and fame are not a topic of contention.

James Righton is a professional musician who found fame with British dance-rock trio Klaxons and, as New York Post noted, the group was “traveling at light speed to the top of the British pop charts” with their 2007 debut, “Myths of the Near Future,” which reached the No. 2 spot on the UK album chart.

Unfortunately, the success didn’t last and Knightley is undoubtedly the more famous of the two, but that’s never been an issue. In fact, when they first met, she knew nothing about his career. “She’d never heard of us,” Righton told the outlet.

Keira was in America when we were having our moment in the sun in the UK, so she was oblivious. But over the years, she came to loads of gigs.

That being said, Knightley’s in-person support comes with boundaries. When Glamour asked if she’s ever toured with her husband, she shared that she has “a little bit but not always.” That’s because while “you want to be slightly part of each other’s world so you can see what makes them tick” and ensure that your lives don’t “become very separate,” it’s all about balance. The key, according to Knightley, is “tricky” but “you should have your own thing, but equally you have to build a life together.”

Also key to their success has been the ability to support each other’s artistic endeavours without competing. Speaking with Porter, Knightley admitted she’s shocked “there are actually articles saying how much [my partner] earned and how much I earned, because it’s newsworthy that a woman could possibly earn more.” As she shared, comparing salaries was never something that crossed her mind because, growing up, there were a lot of times when “my mum was earning more than my dad and that was never an issue.” She continued, “I was not raised to think that was anything other than normal” and she wants today’s younger generation to learn that same lesson. Knightley called on the press to stop “telling girls that you have to feel guilty about doing well if it’s making a man feel uncomfortable, which it doesn’t with my husband and it didn’t with my dad. But yet our society is telling us that’s what it should be,” she observed.

It’s a belief that Righton himself seconded when asked if his wife’s celebrity affects his career or his band. “I just fell in love with someone who happens to be amazing,” he said, adding, “The music is the music. That thing is going to be there because of who she is, but I’d say we’re a pretty established band.”

Block out the noise

These days, Keira Knightley and James Righton are as strong as ever and still putting family first. In October 2021, the actor’s rep confirmed that she was dropping out as the lead in Apple TV+’s “The Essex Serpent” because “as the COVID cases increase in the UK and additional lockdown and restriction rules are potentially being imposed […] there wasn’t a comfortable scenario for Keira that could be put in place for an extended period of child care required for the 4.5-month production.” It also doesn’t hurt that Knightley and Righton are both “basically geeks” and that Knightley considers her hubby to be “the brightest light in any room” and, as she once joked, “much nicer than me.”

Keira’s down to earth approach to marriage is a reminder to be firm in what you believe in. You’re the one who knows best what you need and want out of a relationship — not the outside world. Whereas others may find fault with what they think is an unconventional approach, their opinion does not have to shape or define your ideals.

Love is what you make of it
“This is what marriage really means: helping one another to reach the full status of being persons, responsible beings who do not run away from life.” — Paul Tournier
Tags
Share
← Prev Post Next Post →