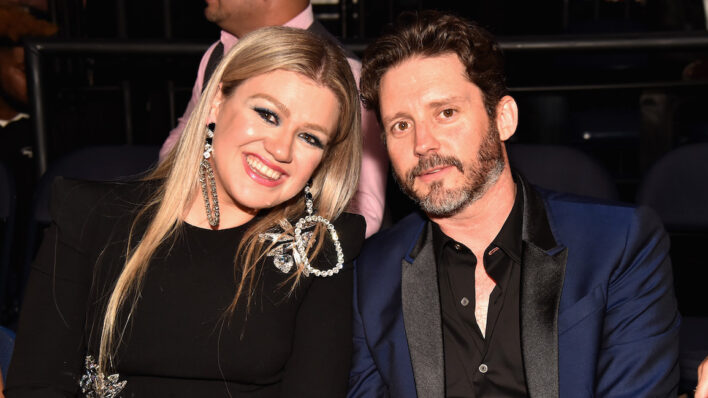 Kelly Clarkson charmed the hearts of millions during her stint on American Idol, but when it came to the affairs of her own heart, things were a little more complicated. That is, until she met Brandon Blackstock and felt something she had never experienced before.
By Barbara Pavone    April 17, 2020

Kelly Clarkson charmed the hearts of millions during her stint on American Idol, but when it came to the affairs of her own heart, things were a little more complicated. That is, until she met Brandon Blackstock and felt something she had never experienced before.

Kelly Clarkson became America’s sweetheart when she won the first-ever American Idol back in 2002, but the Texas native didn’t believe she’d ever be someone’s sweetheart.

I never thought, honestly, I would get married or fall in love, like they say in the movies. I never thought that would happen because I didn’t think it was true.

Noting her parents’ failed relationship (Clarkson was estranged from her father for most of his life), she added, “I just didn’t know if it was possible.”

That mindset made dating difficult because the songstress wasn’t prepared to give love a chance without a high level of scrutiny. As she told The View in 2016, “I had a very high bar if I was going to date someone, ’cause I have a great life. And I’m like, if I’m gonna add someone to it, you’re gonna have to bring something.”

When talent manager Brandon Blackstock walked into her life, he did just that.

Here’s what we can learn from Kelly Clarkson’s life-changing relationship:

Love can weave in and out of your life

Brandon Blackstock changed Clarkson’s entire outlook on love and turned her life upside down, but when they first met, they barely spoke to each other.

It was 2006 and Clarkson was rehearsing her Academy of Country Music Awards performance of ‘What Hurts the Most’ with Rascal Flatts. Blackstock, who was the band’s tour manager at the time, was there, but as the Idol alum recalled, “I didn’t even talk to him.”

He did catch her eye, however.

I’m not joking […] he walked by, I was like, ready to take it all off. I just felt something.

But there was one issue: Blackstock was married and she wasn’t about to do anything because she “ain’t that girl.”

Six years later, they crossed paths again. Clarkson was getting ready to sing the national anthem at the 2012 Super Bowl when she bumped into Blackstock who was at the game supporting another one of his clients, Blake Shelton.

This time, there was one major difference:

Suddenly, there he was at the Super Bowl and he was single.

Blackstock and Melissa Ashworth had split up and when Blackstock’s dad, Narvel, who just so happened to be Clarkson’s manager, re-introduced them, she couldn’t help but hope for a date.

Don’t be afraid to voice your feelings

As she quickly learned, playing coy can derail a potential match. “He thought I hated him,” she said, remembering their early interactions. That’s because Kelly did not want to betray her independent woman aura.

When I finally confessed that, ‘I really dig you,’ he was so shocked […] I hadn’t let on that I liked him. Inside I was like, ‘Ask me out!’ but outside I was like, ‘I love being single and coming home every night alone. It’s awesome,.

Luckily, she eventually decided to share her true feelings, even if it did take some liquid courage. “You get really bold when you’re drunk,” she confessed. The boldness paid off and the pair had their first date a week later on February 11, 2012.

Despite some initial trepidation — “One of my superhero idols is Whitney Houston and the day she died was our first date. I was like, ‘This is a bad omen!’” she later revealed — finally taking a chance on love would soon pay off.

He changed everything she thought she knew about love

In the six years that passed between the couple’s two encounters, Clarkson was not only single, but also starting to question her sexuality. As the Grammy winner told fans during a private concert in 2017:

I had never really dated anyone. I honest to God thought, ‘Is this what it’s like to be asexual?’ I was just not attracted to people.

“This isn’t a downer to anybody I dated before [Brandon], but I’m just going to be real: I never felt like, honesty, sexually attracted to anybody before him,” she elaborated. “I honestly thought I was asexual.”

Then she met her future husband. “I’d never been turned on like that in my whole life,” she admitted. “I was like, ‘Oh that’s that feeling… okay! That’s what they were talking about in Waiting to Exhale.’ I just got it. I just didn’t have a clue.”

Their romance was fast, but cautious

Despite the belief-altering attraction and deep connection Clarkson felt to Blackstock — “I’ve never been truly loved like I am right now! Brandon’s totally the one,” she gushed at the time — the Grammy winner chose to be cautiously optimistic.

Speaking with Ryan Seacrest in October 2012, she noted, “We’re taking it slow, and we’re enjoying each other. I’m from a family of broken marriages,” she continued, but added, “We will definitely break that trend one day.”

Turns out “one day” wasn’t that far away. That December, just 10 months after they had gone on their first date, Blackstock proposed. “I’M ENGAGED!!!!!” Clarkson announced on Twitter. “Happiest night of my life last night! I am so lucky and am with the greatest man ever.”

Why the rush? Turns out Blake Shelton might have played a role in the speedy engagement.

“I told Brandon, ‘Man, you need to grow up and you figure out that you need to marry this girl. You need to get your head out of your a** and ask that girl to marry you!’” the singer revealed.

They want the same things in life, love, and work

Having a partner who supports your career is key and Clarkson and Blackstock, who both work in the music industry, never had any issues understanding the demands of each other’s work. As Clarkson told The Daily Mail, “He works as crazy-hard as me, if not harder, and so doesn’t get in a mood if I can’t always call when I say I will.”

Speaking about their compatibility on Live with Kelly and Ryan, the “Love So Soft” singer gushed, “We complement each other well. We’re a really great partnership, not only for marriage, but for work as well.” So much so that Blackstock has actually become her manager.

Family is another important value they’ve always shared and Clarkson had no qualms taking on the role of stepmom to her beau’s two kids, Savannah and Seth. “We all live together and everything,” she told Ryan Seacrest in 2013. “It’s so different, but it’s perfect. They’re awesome, and I actually really dig the mom thing.”

They put themselves first

While planning their nuptials, Clarkson and Blackstock took everyone by surprise when they decided to cancel their wedding and elope.

“We just got so overwhelmed by it — all the decisions,” Clarkson admitted, noting that “it got crazy” trying to balance their family life with work, wedding planning, and trying to keep everything under wraps — “All the details were leaking!”.

So, they decided to put themselves first and say “I do” on their terms. “I’m officially Mrs. Blackstock,” Clarkson tweeted in October 2013, confirming, “We got married yesterday at Blackberry Farms in TN, the most beautiful place ever!”

We had this big plan and then we just took our kids and then got married with this [minister] we didn’t even know — but it was the most amazing thing — under a little barn on a river.

“It’s cool to make it intimate, because your life is always in the public eye.”

They keep their spark very much alive

Shortly after they exchanged vows, the couple grew their family with the arrival of daughter River Rose Blackstock in June 2014 and son Remington Alexander Blackstock in April 2016.

Despite now being parents to four little ones, they haven’t allowed themselves to fall victim to a common struggle faced by many long-term couples and new parents. Vowing to carve out some ‘me time’ for themselves each day, Clarkson and Blackstock have been adamant about not letting their spark fade away.

“Let’s say we’re just a lot more active than other couples,” Clarkson told Redbook in 2019. “When I met Brandon, I wasn’t looking for a friend. I have a lot of great friends! I was looking for a lover,” she explained.

I had never found someone I was truly passionate about, who I wanted to stay in bed with all day. The fact that I did, well, I was going to latch on and take advantage of that.

Kelly Clarkson and Brandon Blackstock’s relationship proves that, when the right person enters your life, everything can change on a dime. Kelly has been open about the fact that she never really believed in romance.

She had all but given up on dating — “I was single for, like, ever,” she told USA Today — but then Mr. Right came along and changed everything.

Not only did Blackstock completely alter her outlook on relationships, but he made her feel like her very best self. In doing so, he opened her eyes to what a positive partnership could look like and gave her the type of unconditional love and support she never thought possible.

No matter how long it takes, when love does find you, it holds the power to wipe out all of your preconceived notions and to help set a whole new standard of happiness.