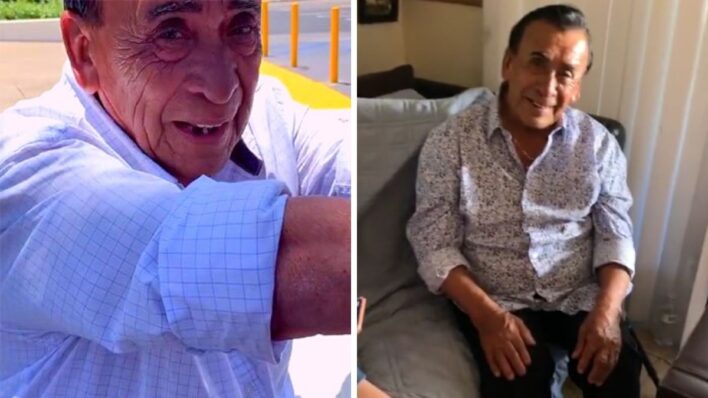 A chance encounter can completely change someone’s life. This was the case for 94-year-old tamale vendor Jose Villa Ochoa, who also goes by the nickname “Don Joel,” whose meeting with Kenia Barragan led to an life-changing turn of events.

No one would hire him

Kenia Barragan was out for a walk in Santa Ana, California, when she came upon the elderly vendor who was selling fresh tamales. That’s hard work, especially in the hot Santa Ana sun, and he looked tired and unwell. Feeling moved, she gave him all the money she had and told him to keep his tamales.

But that was only the beginning of the story. When the 94-year-man broke down in tears with gratitude for the small gesture, the woman saw he may need a lot more compassion than some money and a meal. So she sat down to talk to him and learn more about him.

“I felt for him,”  Kenia Barragan told KTTV News, “My parents are both older, and I would hate to see my dad out selling tamales for somebody and barely making ends meet.”

The man, known as ‘Don Joel’, told Barragan that even though he wanted to work, he was having a rough time getting a job because of his age. Hence, he had resorted to selling tamales in the streets for a lady. Stuck in an old, moldy wheelchair, his meagre earnings barely covered the cost of food.

He can barely afford to buy his coffee and bread in the morning to eat and doesn’t have money to pay for a phone, let alone his medication. I found all this out, just by taking a few minutes out of my day to acknowledge a stranger.

After hearing his touching story, Barragan felt she had to do something to help Don Joel. She thought sharing his story on Instagram and asking for some assistance for the distressed street vendor would be the first step. Never expecting the results, Kenia was overwhelmed: within only a week, she had gotten $84,000 in donations!

“We raised over $84k in just a week!!! My heart is touched. Thank you to everyone that donated, supported, and reached out,” she said.

While the money went toward Don Joel’s retirement, Barragan also bought him a new wheelchair and new shoes. It was, to Don Joel, life-changing generosity. As for Kenia, she hopes her actions would inspire a positive movement.

I hope people take care of our community. We need to take care of each other. Even if you can’t give money — donate a prayer, give something back, take the time to get to know someone.

Barragan felt the same, and she loves that she was able to help him and make a difference. We never know when a small gesture – like a meal and taking the time to talk to someone – can literally change the entire path of both your lives.